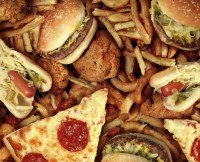 Source: Thinkstock.com
Sonic, according to a 24/7 Wall St. analysis, is the least healthy major fast-food restaurant in the United States.

24/7 Wall St. analyzed nutritional information for each of the country’s largest fast-food restaurants based on publicly available nutritional information for each chains menu. Specifically, we examined the levels of saturated fat, trans fat, sodium, carbohydrates, sugars, and calories in each menu item and compared them to the typical levels found at the nation’s most popular fast-food chains. More menu items exceeding those levels resulted in a lower rank. Based on our rank, these are the least healthy fast-food restaurants in the country.

Christine Palumbo, RDN, FAND, a nationally recognized nutrition expert, discussed the problems with some of the worst fast-food menu items. “When I think of extremely unhealthful fast-food items, they tend to be large, meat-heavy sandwiches,” Palumbo said. “They are high in calories, sodium, and saturated fat.” Those are the nutrients that are linked to cardiovascular disease, she said. In fact, seven of the ten least healthy restaurants identified by 24/7 Wall St. primarily served hamburgers.

However, it is possible to both eat at fast-food chains, and maintain a healthy lifestyle. “I would not ever want to dissuade someone from eating at a Wendy’s, a Taco Bell, a KFC, a McDonald’s, or Chick-Fil-A,” Palumbo added. “You can eat well, you can eat very, very poorly, or somewhere in between. It all boils down to the choices you’re going to make.”

Indeed, when we conducted our review of the largest fast-food restaurants, we wanted to acknowledge that consumers have a choice to avoid the worst items on the menu. In order to account for this, 24/7 Wall St. penalized restaurants based on the extent to which the menu is unhealthy as a whole, rather than on the most egregious item on the menu.

For example, Popeye’s Chicken Livers sandwich, which has nearly 1,200 calories, 34 grams of saturated fat, and 4.5 grams of trans fat, is one of the least healthy items on any fast-food menu. Yet no other meal item on Popeye’s menu has more than 690 calories or 22 grams of saturated fat. Popeye’s, therefore, did not rank as one of the least healthy restaurants because it offers many healthier options. Restaurants that offered many unhealthy options and few healthier ones ranked lower.

Speaking with 24/7 Wall St., Jim White, RDN, ACSM HFS, spokesman for the Academy of Nutrition & Dietetics, and owner of Jim White Fitness & Nutrition Studios, explained how difficult it can be for Americans to determine what is healthy on their menus. “You could have a meal that is fairly low in fat, and most people would think it is healthy.” However, he said, all nutritional measures should be considered. “It’s really hard for the consumer, because it’s a balance. Most measure calories, or fat or carbs, but looking at all of them is important to get the equal value for these items.”

Toby Amidor, dietitian-nutritionist and author of “The Greek Yogurt Kitchen: More Than 130 Delicious, Healthy Recipes for Every Meal of the Day,” explained that poor health consequences occur when popular restaurants have items that exceed daily recommended levels in more than one category. Indeed, the least healthy fast-food restaurants have items above the recommended levels of multiple nutrients. In the case of Quizno’s, for example, more than 35% of the restaurant’s meal items had among the highest levels in all six categories. In many of the healthier restaurants, none of the meal items were above normal levels in all six nutrients we considered.