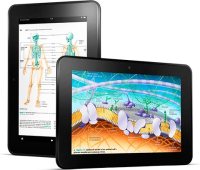 Source: Amazon.com Inc.
Now that the dust has settled a bit on today’s announcements of new products by Amazon.com Inc. (NASDAQ: AMZN), we’ll take a look at the whole stable full of new horses.

Note to Nokia/Microsoft: all the new products can be ordered starting today for delivery beginning on October 1. That’s how the game is played in the big leagues.

The Kindle e-reader family gets a new Kindle Paperwhite model in both Wi-Fi only and 3G wireless configurations. The Wi-Fi only version costs $119 and the 3G version costs $179. The device has a front-lighted screen similar to the one available with the Nook e-reader from Barnes & Noble Inc. (NYSE: BKS).

Amazon also released two new versions of its Kindle Fire tablet: a 7-inch Kindle Fire HD and an 8.9-inch Kindle Fire HD 8.9” 4G. The 7-inch version includes stereo speakers, Wi-Fi, 720 p HD LCD display, and 16 Gbytes of storage. The 8.9-inch version includes all of the above plus 4G LTE wireless, a 1080p HD LCD display, and a one-year 4G data package for $49.99 that includes 250 Mbytes/month of wireless data, plus 20 Gbytes of Cloud Drive Storage and a $10 credit at Amazon’s Appstore.

Amazon’s pricing is very aggressive, especially for the 4G LTE Kindle Fire HD devices. The 32-Gbyte model is priced $230 below the 32-Gbyte LTE version of the iPad from Apple Inc. (NASDAQ: AAPL). Amazon’s 4G data plan is also $180 cheaper than Apple’s comparable plan according to information on Amazon’s web site.

The company claimed last week that it has captured 22% of the U.S. market for tablets. That may be a stretch, given that Samsung’s Galaxy Tab is reportedly the second-best selling tablet behind the iPad. Both Amazon and Samsung are trying to surround Apple’s single size iPad products with a variety of sizes, shapes, and features.

Whether the companies can make money at their price points is a whole different story. There are reports that Amazon had been losing as much as $40 on each Kindle Fire it sold. It takes an awful lot of e-book sales to make up that much margin loss.

What Amazon has going for it, though, is the ability to live on tiny margins. That’s been the case for the company practically from its beginning. If the new Kindle Fire tablets can cut Apple’s share, that could hit Apple where it really hurts — right in the company’s top line. We’ll find out a lot more as we get into this year’s holiday gift-giving season.

Bed Bath & Beyond Is Junk