Can Staples Break the Postal Service? 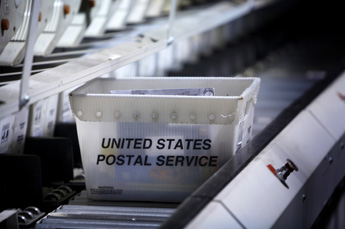 Source: courtesy of USPS
Union workers for the U.S. Postal Service (USPS) plan to protest a deal between the Post Office and Staples Inc. (NASDAQ: SPLS) that was struck late last summer and has so far resulted in the opening of 82 contract postal units in Staples stores around the country. The protests are set to take place Thursday at 56 additional Staples locations that are being added to the program.

The American Postal Workers Union (APWU) represents 200,000 USPS workers, about half the total number of Post Office employees, and their average wage is $25 an hour according to a report in The Wall Street Journal. According to Glassdoor.com, a sales associate’s average salary at Staples is $8.52 an hour, in a range of $7 to $11.

The APWU cites an internal USPS memo giving a reason for the Staples contract:

The pilot will be used to determine if lower costs can be realized with retail partner labor instead of the labor traditionally associated with retail windows at Post Offices. … Transferring USPS product and service transactions to retail partner locations should allow USPS to cut costs … Initial analysis suggests that Retail Partners can sell USPS products and services at a projected cost-to-serve of $0.16 per revenue dollar, which is less than a third of the cost-to-serve observed at traditional Post Offices.

That sounds about right: replace a worker making $25 an hour with one making $8.50 and the USPS saves two-thirds of its labor costs.

Britain’s Royal Mail was privatized last October at 330 pence (about $5.50) per share and traded Wednesday at around $9.50. And while shareholders may be happy, some 1,300 managers who are about to get sacked are not. The British union representing 7,000 Royal Mail managers has demanded a commitment from the company that it will not lay off workers and that it will redeploy current employees within the restructured company. If Royal Mail refuses, the union would likely seek approval from members for a job action.

Could the USPS go through an initial public offering of its own? The major hurdle is the postal service’s enormous pension obligation and whether or not that would be part of the deal. Far simpler to contract out the labor-intensive postal window business.

SEE ALSO: Cities with the Most Content (and Miserable) Workers