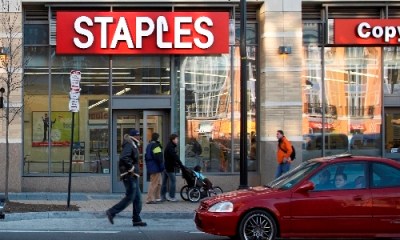 Source: Wikimedia Commons
Often the simplest and most subtle changes can turn an industry upside down. A recent change by the Federal Trade Commission (FTC) in its language significantly broadens the definition of competitive segments in retailing. In fact, that change in verbiage is what helped pave the way for the Office Depot Inc. (NYSE: ODP) and OfficeMax merger when the FTC widened its previous definition of a retail segment by including Internet competition and mass merchants in the size of the office supply superstore competitive space. In a new research report, the retail analysts at Credit Suisse say that could just be the beginning.

The Credit Suisse team thinks multiple mergers could happen in vitamins, sporting goods and the pet supply areas. With so much overlap in retail competition, and the ability for retailers to generate higher discounts for larger purchasing and create larger overall revenue, the stage may be set. They point to the O’Reilly Automotive Inc. (NASDAQ: ORLY) sixfold stock price increase since its purchase of CSK Automotive over the past few years.

The following are some top stocks that could be in retail sectors where mergers and consolidation make good sense.

Advance Auto Parts Inc. (NYSE: AAP) may be another top auto parts name that gets in to the mix. The huge gains in O’Reilly since its deal certainly has set the other names in the business up for possible action. While only half the market cap of the O’Reilly and AutoZone, Advance Auto Parts could take a shot at rolling up some of the other smaller names to take a seat at the table with their bigger competitors. Investors are paid a tiny 0.2% dividend. Credit Suisse rates the stock Outperform and has a $133 price target. The Thomson/First call estimate is at $136.65. The stock closed Monday at $125.25 a share.

Dick’s Sporting Goods Inc. (NYSE: DKS) could be on the prowl for other companies to buy. The company is gearing up for huge growth and intends to significantly build its store base to more than 800 — a greater than 300 store increase. Rather than organically proceed, a well-placed purchase or merger might get this top retail name where it wants to be much faster. Investors do receive a small 0.5% dividend. The company is rated Outperform, with a $65 price target. The consensus price target is $61.58. Shares ended Monday at $53.12.

GNC Holdings Inc. (NYSE: GNC) could be poised to make an acquisition or propose a merger in the huge retail vitamin area. With a market cap nearly double the size of Vitamin Shoppe, a larger presence would help it battle the big-box retailers and the natural foods grocers. The company pays shareholders a 1.7% dividend. GNC is rated Neutral at Credit Suisse, with a $43 price target. The consensus price target is $50.09. The stock closed Monday trading at $37.51.

PetSmart Inc. (NASDAQ: PETM) is a top name in the fragmented pet supply area and could be looking to increase its reach with a merger. The company faces a similar problem that all the independent retailers do. It has to fight the big-box stores that carry products that it also retails. Investors receive a 1.2% dividend. Credit Suisse rates the stock at Neutral with a $70 target. The consensus price target is $70.31. PetSmart closed Monday at $66.03.

Staples Inc. (NASDAQ: SPLS) has been a roller coaster for investors, and it may also be thinking of either an acquisition or a merger. We recently wrote how they may even see some benefit from the recent merger and better-than-expected earnings in its space. Investors are paid a 3.7% dividend. The stock is rated Neutral with an $11 price target, which is just below the consensus price of $11.61. Perhaps surprising, considering Monday’s close at $13.23.

The key for investors is not only the change in the FTC language, but the huge move O’Reilly made in the years after the move to consolidate and expand its footprint. While there is no guarantee that other stocks doing deals would perform as well, the synergies that can be part of such a move are clear, and the Credit Suisse team thinks deals could be on the way.

This Is the Least Trusted Retailer in America

The Most Trusted Retailer in America

This Is Every Country With a Walmart Store

A New Day, a New Meme, a Newegg