Analyst Calls Sears Worth Only $20 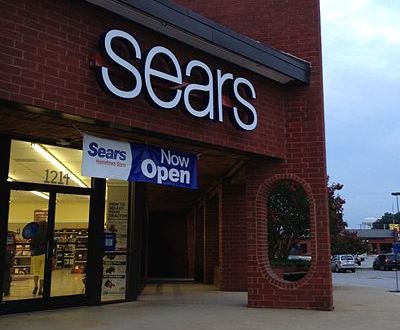 Source: courtesy of Mike Kalasnik, via Wikimedia Commons
Sears Holdings Corp. (NASDAQ: SHLD) keeps posting losses on top of losses, and it has been evident for quite some time that Eddie Lampert should have stuck to running hedge funds. This disaster of a retail story has looked like the fall of Rome, and at least one analyst has gone on record saying that things will go from bad to worse to even worse.

Credit Suisse’s Gary Balter has had an Underperform rating out for Sears for a while now. After the company’s poor earnings report, Balter also has a report maintaining his $20 price target. If you want to know how positive or negative the report is, it is titled “Running Out of Fingers to Stop the Leaking.”

Sears, despite massive real estate sales in Canada, closing a significant number of underperforming stores, a spin-off and $500 million dividend from its best division, and significant inventory reductions, managed to end the quarter with a weaker balance sheet than a year ago as debt rose $374 million year-over-year to approximately $4.1 billion excluding pension obligations, and thus, net debt was actually up $14 million year-over-year. As important, EBITDA declined significantly in all divisions… hurt by significant declines in gross margins… and poor sales, particularly in the Kmart (down 6.6% y/y) and Sears Canada (down 17.2% y/y) divisions. We note that results would have been even worse, but Sears Canada’s results included some stores already sold in operating results and Sears Domestic included comps from Lands’ End for two months, which helped them to eck out a slightly positive comp (+0.2%).

ALSO READ: Sears Shows That It May Never Be Profitable Again

The report even slams the Shop Your Way plan by saying:

Prominently displayed in this company’s press release was the mention of the 600 basis points increased penetration year-over-year in sales to Shop Your Way members, something Sears has highlighted for a few quarters. However, from our perspective, we are unsure about the value of this accomplishment. Other than Groucho Marx, who famously would not join a club that would accept him, why wouldn’t someone join a free club that offers discounts? Shop Your Way is not Amazon Prime where one pays to belong.

Some investors and probably ESL believe that we are too negative on Sears Holdings’ outlook. So despite the massive decline again in EBITDA and the lack of improvement in the balance sheet even after selling off ~$2 billion in one-time items, we will give Sears the benefit of the doubt. Sears spends lots of time in the back of their presentation on the what if scenarios assuming many things work in the retail operations and ignoring that the company only seems to generate sales if they are lowering pricing. So let’s accept their math and take the low end of their assumed improvements. Based on that, we would add $1 billion to EBITDA from initiatives, which adding to trailing twelve months would give them positive EBITDA (yes you read that right) of $300 million. Here is the problem. The bulls on Sears argue for the most part that the value is in the real estate and brand names. If Mr. Lampert is trying to make it as an operator we should value them as such, but that’s a bigger problem. Using a positive $300 million EBITDA, that would imply an EV/EBITDA multiple of 29.5x lets say in 2017 to give them time for the turnaround. That would place their multiple well above anything we cover, including our best growth names such as The Container Store, Tractor Supply, ULTA, Lumber Liquidators, and CarMax. So if one accepts the turnaround and we give them an 8x EV/EBITDA multiple three years out, a somewhat generous multiple for a non-top-line grower, then the value of the equity would be negative. H’mmm. Maybe the company should explore the asset sale. Said another way, this remains a significantly overvalued stock and while we are not moving to a negative target price, we are maintaining our $20 target price.

Sears should be thankful that its stock is only down 3% at $35.47. Its 52-week range is $31.26 to $67.50, and there seems to be no end in sight for the bad news. Amazingly, its market cap is down to $3.8 billion. That is pathetic considering that its sales were just over $36 billion in its past year, although those sales keep falling and falling.

Ahead of Amazon Prime Day, Walmart Gets Crushed