The Sun Never Sets on the Amazon Empire

At its peak in 1920, the British Empire spread to cover more 35.5 million square kilometers (km) of the earth’s surface. In 2018, the empire of Amazon.com Inc. (NASDAQ: AMZN) dominates the e-commerce market in an area covering 34.96 million square km.

And Amazon is not alone. Alibaba Group Holding Ltd. (NYSE: BABA) dominates e-commerce markets on nearly as much territory (13.68 million square km) as the Qing dynasty of 1790.

Amazon’s e-commerce empire dominates in North America, Europe and parts of the Middle East and Africa. Alibaba dominates in China and, through investments in other e-commerce platforms, much of southeast Asia as well.

The following map from Website Builder Expert indicates the extent of e-commerce dominance by eight companies. 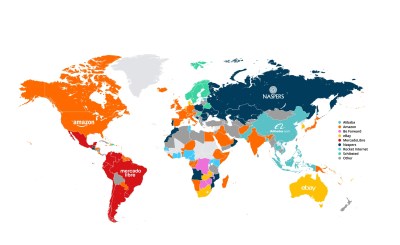 Here’s the list, along with the number of countries in which each company dominates, the online population served by each company and the square kilometers (km) covered by each empire.

One player not included in the Website Builder Expert survey is Walmart Inc. (NYSE: WMT), which leaped into the fray recently with its acquisition of a controlling interest in India’s Flipkart. India’s e-commerce market is growing faster than any other in the world and Flipkart is its largest player.

Africa remains the other place that stands out on the map, showing clearly that the continent’s e-commerce market is highly fragmented. With a total addressable market of more than a billion people, it’s just a matter of time before colonization reaches Africa’s e-commerce market.