Massachusetts provides many benefits to its residents. For instance, as a result of its widely-talked about health insurance system, only 4.4% of people are uninsured — the lowest rate in the country. The state also spends a large amount on cash assistance for needy families and on pension benefits for retired state employees. To provide this much, however, the state must spend a lot. As a result, Massachusetts has the highest state debt per capita in the country.

In 2009, Oregon had the second-lowest revenue per capita and spent the 20th most per capita in the state budget. Oregon has a higher-than-average rate of adults with a high school education, as well as the 12th-lowest violent crime rate in the country. But the state otherwise performs quite poorly. Oregon has worse-than-average poverty rate, health insurance coverage and unemployment. Meanwhile, the state had the ninth-highest foreclosure rate in the country in October — one in every 455 homes. 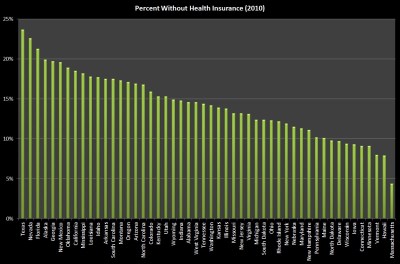 Source: (September, 2011): From the Census Bureau’s American Community Survey for 2010, the percentage of residents without health insurance

Colorado has dropped from 25th place last year to 33rd this year. The state is hurt in part by its housing market. One in every 458 housing units were foreclosed in October 2011. Still, the has a rate of education that is relatively higher than most other states with just under 90% of residents 25 and older finishing a high school education.

New York state received the seventh greatest revenues per capita in the country and actually spent the sixth most per capita that same year. At $3,553, the state spends the fifth most per person on education. It also spends the most in the country on public welfare at $2,276 per person. However, this high spending has led to continuous fiscal problems in the state. New York has the eighth-highest debt per capita in the country as well as an S&P AA credit rating. Even with the high level of spending, New York falls short in many measurements. It is worse than average in violent crime, high school graduation, poverty and decline in home value since 2006.

Arkansas has the third highest rate of poverty in the country, which in turn hurts its ranking in other categories. It has the third lowest median household income. The state also has a low percentage of residents with high school diploma compared to the other states, as well as a high rate of violent crimes. However, the state has the fifth lowest state debt per capita.

Alabama only has a AA credit rating, but it maintains one of the lowest debts per capita in the country, at just $1,738 per person. Also, foreclosures are near the average. Otherwise, the state performs among the worst in the country in nearly every considered metric. The state has the fifth-lowest median household income in the country, as well as a poverty rate of 17.4% — the seventh-highest in the country.

Despite having the second highest median household in the country, New Jersey performs poorly in a number of areas. Most notably, the state has the sixth highest state debt per capita. Its credit rating was also downgraded from AA to AA- in February 2011 due to concerns over its massive retirement obligations.

Mississippi has improved six slots from last year and is now out of the bottom 10. The state spends the 11th most in the country on public welfare, yet it remains the poorest in the country. Residents’ median income was just over $36,000 in 2010, with more than one in five living below the poverty line. Both of these statistics are the worst in the U.S. On the other hand, foreclosures in October were the fifth lowest in the country. Also, violent crime has dropped significantly in the state over the past year, from 304.6 incidents per capita in 2009 to 269.7 in 2010.

West Virginia has the sixth highest percentage of people living below the poverty line in the country. It also has the eighth lowest percentage of adults with a high school diploma and the second lowest median household income of $38,218. The state also collects far more in revenue compared to other states, while it spends about an average amount.

Florida was hit hard by the housing crisis. Home values declined the third most-in the country between 2006 and 2010. In October, one in every 423 homes was foreclosed upon. The state spends very little relative to its budget, and so it maintains a low debt per capita and a AAA credit rating. However, its lack of expenditure on public welfare has not helped the state’s poor, unemployed and uninsured citizens. The state had the sixth highest unemployment rate in the country in September. Also, 21.3% of Florida’s population in 2010 was without health insurance, the third-highest rate in the country.