New Mexico has a relatively low unemployment rate of 6.6% compared with the national average of 9.1%. This is down from 8.6% one year ago. Other statistics are not as promising. At 18.7%, the state has the second highest poverty rate in the country. Worst still, almost 20% of New Mexicans do not have health insurance. The state also has the highest rate of violent crime in the country.

Louisiana remains in our bottom 10 again this year, although it has improved since last year, primarily because of decreases in unemployment and violent crime rate. In all, however, the state ranks poorly in most of the metrics we considered. Louisiana has the fifth-highest poverty rate in the country, the 10th-highest percentage of residents without health insurance coverage and the fifth lowest percentage of adults with a high school diploma. 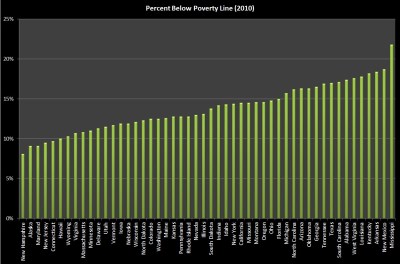 Source: (September, 2011): From the Census Bureau’s American Community Survey for 2010, The percentage of households with income below the poverty line in the past 12 months.

Rhode Island has many positive attributes, including low violent crime rate and a relatively low poverty rate. However, the state’s spending is exceptionally high, and it has accumulated $8,716 in debt per capita. Nearly 20% of expenditures are for public education, yet compared with other states it has the 10th lowest percentage of adults who have graduated from high school.

Last year, 24/7 Wall St. named Kentucky the worst-run state in the country. The state saw slight improvements in the percentage of its population with high school diplomas and poverty rate. Violent crime dropped significantly — now the 10th-lowest rate in the country, compared to the 17th-lowest last year. Despite these improvements, Kentucky remains one of the poorest states in the country, ranking among the five worst for median income and poverty rate. It is also one of just four states to be awarded an unfavorable AA- credit rating, the third worst score awarded to any state.

Fiscally speaking, South Carolina is relatively sound. It takes in the 27th most in revenue per capita and spends the 24th most in total expenditures per capita. Its state debt per capita is slightly below average. However, the state has the eighth highest poverty rate and the fourth highest unemployment rate. It also has the fifth highest rate of violent crime, with 597.7 crime committed per 100,000 people. This is actually an improvement from last year when the state’s violent crime rate was 731 per 100,000 — the worst in the country.

Nevada has dropped five places in our rankings. This drop is due primarily to its credit downgrade this year from AA+ to AA. Surprisingly, the state has one of the lowest debts per capita in the country, at just $1,690 per person. However, it has other financial woes that make it a long-term risk. Nevada properties declined 44.5% in value between 2006 and 2010, the worst decline in the country. In October alone, one in every 180 homes was foreclosed upon, easily the worst rate in the country. The state also has the second lowest percentage of residents covered by health insurance and the highest unemployment rate in the country.

Arizona’s housing market was one of the worst hit in the country during the housing crisis. Home values have dropped 28.6% since 2006, the fourth worst rate in the country. In October 2011, one in every 259 housing units were foreclosed upon, which was the third worst rate that month in the U.S. Arizona also has one of the lowest credit scores in the country after its downgrade to AA- in 2009.

Michigan has arguably suffered more than any state in post-industrial America. The state is one of just four with a credit rating of AA-, although its debt per capita is actually below average. The state ranks among the worst in the country for violent crime, unemployment, foreclosures and home price decline. 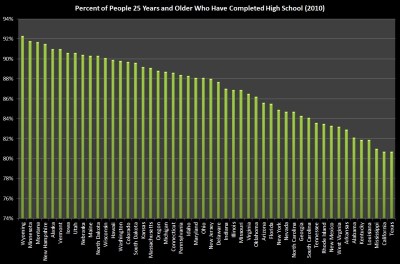 Source: (September, 2011): From the Census Bureau’s American Community Survey for 2010, the percentage of residents 25 or older with a high school diploma

Illinois has fallen from 43rd last year to the overall second-worst run state in the country. The state performs poorly in most categories, but is worst when it comes to its credit rating. Illinois has a credit rating of A+, the second worst given to any state, behind only California. The state has been on credit watch since 2008 because of budget shortfalls and legal challenges against then-governor Rod Blagojevich.