Wyoming comes in first place in 24/7 Wall St.’s Best Run States for the second year in a row. The state has high marks in many categories including high school graduation rate. A whopping 92.3% of state residents age 25 or older have at least a high school diploma — the highest rate in the country. The state also has the fourth lowest rate of violent crimes and the sixth lowest unemployment rate. Wyoming has the smallest population of any state in the country.

The state of Nebraska had the 21st lowest revenue per capita in the country in 2009 yet managed to spend more per capita that year than all but seven states. The state has the fourth lowest debt per capita, and it is one of 13 states with a perfect AAA credit rating. Besides being financially sound, Nebraska also has an unemployment rate of 4.2%, the second lowest rate in the country. The state also has relatively low poverty, high graduation rates and the seventh lowest rate of foreclosures last month.

Also Read: The States Doing The Most (and Least) To Spread The Wealth

One of the best measures of North Dakota’s success is its unemployment rate of 3.5% — the lowest in the country and one that has n0t been above 5% in over 20 years. While the state has relied on a stable agriculture sector to keep unemployment low, the booming oil industry has created a $1 billion surplus in the past three years. From 2009 to 2011 Montana was the only other state to report a surplus, according to the Center on Budget and Policy Priorities. 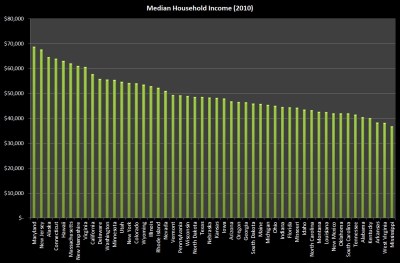 Minnesota moved up in the ranking from fifth to fourth due to its improvement in several categories, including violent crime rate and health insurance coverage. In 2010, just 9.1% of state residents were without health insurance coverage — the fourth best rate in the country. The state also continues to excel in the areas it did last year. Some 91.5% of the state’s adult population has graduated high school — the second highest percentage in the country. The state also has the eighth lowest debt per capita.

Iowa’s greatest assets are its rates of educated and insured residents. Some 90.6% of residents 25 years and older have at least a high school diploma and only 9.3% of residents do not have health insurance. These are among the best rates in the country. Iowa also has an exceptionally low unemployment rate and the highest credit rating available, demonstrating its healthy economy.

Utah kept the same rank it had in our last survey. The state has the fifth-lowest violent crime rate in the country, as well as the seventh-highest graduation rate in the country. However, Utah had one of the higher foreclosure rates in the country in October, and 15.3% of the population — an above-average rate — is without health insurance.

Vermont does extremely well in a number of areas considered for this list. Residents are highly educated. It has the second lowest rate of violent crime in the country. It has the third lowest percentage of uninsured residents. However, the state has saddled its citizens with debt. Vermont’s debt per capita is more than $5,500, which is the ninth highest in the country.

Also Read: The Twenty-Five Most Valuable Blogs In America

Virginia is the highest-ranked state in the southern U.S., largely because it does not suffer from many of the problems that plague the rest of the South. The state has a median income of $60,674, the eighth-highest in the country, as well as a poverty rate of 10.7%, which is the eighth lowest. The state also has the sixth-lowest violent crime rate in the country, with just 213 incidents taking place in 2010 for every 100,000 people. 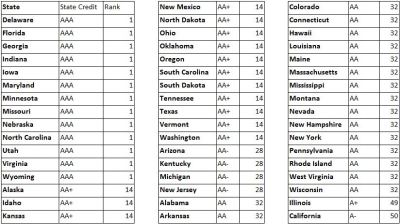 Kansas has the 10th-lowest state debt per capita in the country. However, the state’s ranking may change as its debt grows. According to The Hutchinson News, borrowing by school districts has increased over 800% since 1990. Kansas has a relatively low unemployment rate of 6.7% compared to the national rate of 9.1%.