The 10 Countries Where People Smoke Most 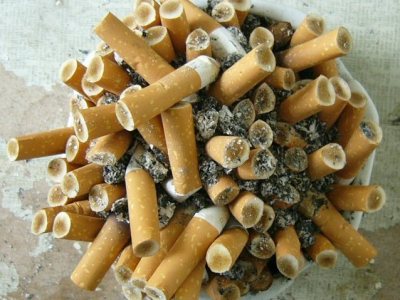 Source: courtesy of NBN at German Wikipedia
According to data released earlier this year, tobacco is responsible for slightly less than one in four deaths in the United States. In some countries, it is even more — in Turkey, nearly 40% of deaths among males are related to tobacco. Cigarette smoking, despite strong evidence of its harmful effects, continues to be a serious problem worldwide. Tobacco use is linked to a large number of diseases and is the single most preventable cause of death in the world, according to the World Health Organization.

Read: The 10 Countries Where People Smoke Most

The reason why people smoke is too complex to have a single answer, but a review of smoking habits by country offers some powerful clues about why some use while others do not. Based on data compiled jointly by the American Cancer Society and the World Lung Foundation in its annual Tobacco Atlas report, 24/7 Wall St. identified the 10 countries with the highest smoking rates.

A look at the history of the tobacco industry in the U.S. illustrates many of the factors that affect smoking. For decades, cigarette companies were among the largest advertisers in print, on radio and on television. In 1964 that began to change, when the government issued the results of “Smoking and Health: Report of the Advisory Committee to the Surgeon General.” Among its most important findings was the direct link between tobacco use and cancer. A ban on cigarette TV and radio advertising soon followed.

A series of marketing restrictions and public relations disasters only made things worse for the American tobacco industry. In 1998, following successful actions brought by 46 state attorneys general, tobacco companies were forced to accept a settlement of $246 billion to be paid over 25 years.

It became clear to the public that tobacco companies had known about the health hazards for decades and had concealed the information to protect profits. As a result, billions spent and made on cigarette advertising was essentially wiped out by a wave of mistrust directed against the industry and its products.

Similar efforts in China are only in their early stages, and government action has gone largely unenforced. According to the Council on Foreign Relations, the severity and breadth of the tobacco problem have failed to prompt a strong response from the government. According to its findings, “none of the Politburo Standing Committee members (all of them nonsmokers) have made any public statements against tobacco production and consumption.”

As might be expected, prices relative to income in each of the 10 countries with the highest rates — six of which are in Eastern Europe — are among the lowest in the world. In Russia, one of the countries with the highest rates of smoking, the cost of cigarettes relative to per capita income is lower than all but four large countries. “Because prices are low,” Eriksen said, cigarettes are affordable, and “smoking becomes a ‘cheap pleasure’ for residents of these countries.”

Despite the availability of inexpensive cigarettes, poverty still appears to keep smoking rates low in some regions. In many poor African nations, rates of tobacco use are the lowest in the world. Limited government resources would suggest these rates are not the result of government controls.

In fact, it is more likely that the reason is limited corporate profits. Large tobacco companies may consider potential sales constrained by the poor and widely distributed populations of Africa. However, the potential size of the continent’s markets means it may become attractive to companies that have begun to reach product saturation elsewhere.

According to Eriksen, while cigarette use in Africa is among the lowest in the world, public health organizations are concerned that tobacco companies will increase cigarette demand. “Africa has the potential of being the only place in the world to prevent the occurrence of the tobacco epidemic, that has elsewhere lasted a century and caused millions of deaths,” said Eriksen.

A review of smoking across the world suggests that the U.S. story reflects a number of common issues, though at very different stages. The large global tobacco companies understand that marketing is critical to getting people to smoke. So is pricing. Government taxes and profit-hungry manufacturers can increase prices high enough to discourage the use of tobacco. The government can play an additional critical role of a health watchdog. In the United States, this began in earnest five decades ago.

To determine the countries that smoked the most, 24/7 Wall St. reviewed data from The Tobacco Atlas, a joint study between the American Cancer Society and the World Lung Foundation. We then analyzed data for all available nations with a population of more than 5 million, in order to study the countries with the largest numbers of smokers. The percentage of smoking among men, women and total adults in each nation are from 2010 or reflect the most-recently available data for that country. Because no combined normalized rate was available for these groups, we used actual data instead of normalized figures. For smoking rates among children aged 13 to 15, data reflects 2011 or the most-recently available year. Information on deaths attributed to tobacco was provided by The Tobacco Atlas for 2004, while information on tobacco production and the number of cigarettes smoked per capita is from 2009. Pricing information is from 2011, and reflects the cost of a 20 cigarette pack of Marlboro cigarettes, or their equivalent.

These are the 10 countries where people smoke the most.

The Highest-Grossing R-Rated Movies of All Time