States Smoking the Most Smuggled Cigarettes 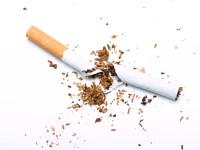 Source: Thinkstock
Tobacco consumption in America has declined consistently since the surgeon general’s office published its first report in 1965. However, more than 18% of adults still identified as smokers in 2013, and in many states, demand for tobacco is high enough to justify large-scale smuggling operations. In New York, a nation-leading 58% of the cigarette market was smuggled in 2013. The share is so high that it hardly fits the description of an underground market.

Cigarette taxes vary greatly between states, and therefore, so do cigarette prices. According to the recent Tax Foundation report, “Cigarette Taxes and Cigarette Smuggling by State, 2013,” this creates arbitrage opportunities for smugglers — that is, the profiting from asset price differences. As a result, some states have net inflows of smuggled cigarettes, while others report net outflows. Based on smuggled cigarettes consumed as a percentage of total cigarettes consumed in 2013, these are the states with the highest cigarette smuggling rates.

Click here to see the states smoking the most smuggled cigarettes

Smuggling can take a variety of forms, from casual smuggling, when individuals purchase cigarettes at a discount across state lines for personal consumption, to commercial smuggling, which could mean large-scale criminal organizations. The severity of these crimes varies considerably, and depending on state regulations, many acts of smuggling go completely unnoticed. For our purposes, cigarette smuggling is defined broadly as an avoidance of cigarette taxes.

A state’s cigarette tax is the largest contributor to the smuggling rate. The tax rate on cigarettes in all but two of the nine states where smuggling is most common exceeded the national average rate of $1.44 per pack. In New York, the tax rate is $4.35 per pack, the highest in the nation. Neighboring Vermont, Pennsylvania, as well as nearby New Hampshire, all had much lower tax rates, as well as net outflows of contraband tobacco.

Do you think 'sin taxes' on cigarettes are ethical? in 24/7 Wall St.'s Polls on LockerDome

In an interview with 24/7 Wall St., Scott Drenkard, economist and manager of state projects at the Tax Foundation, as well as the author of the Tax Foundation’s report, explained that in states that have much higher taxes than other states, and not very much separation geographically, the likelihood of smuggling increases dramatically. The problem, according to Drenkard, “is that we have a price prohibition on these products because we’ve taxed them at such high rates in some states.” As in the 1920s, “when you have prohibition you’re going to have bootlegging [and] you’re going to have arbitrage,” Drenkard said. “You have the same economic engines at work that create these black markets.”

In addition to the high tax rate variance between states, there is the added opportunity for smugglers to buy cigarettes in Indian reservations where tobacco is often far less expensive. New York, New Mexico, Arizona, Wisconsin, and Washington are all near Indian reservations that likely influence the smuggling rate considerably.

While smuggling cigarettes was extremely lucrative for many smugglers, large-scale or small, smoking cigarettes was relatively uncommon in all of these states. The percentage of adults who identified as smokers in 2013 exceeded the national smoking rate of 18.2% in only two of the nine states reviewed. According to Drenkard, many states have increased excise taxes in order to generate revenue and bolster failing budgets. State reserves as a percent of general fund expenditures in fiscal 2014 — also known as a rainy-day fund — did not exceed the average for the nation in seven of the nine states with the highest smuggling rates.

For Drenkard, levying such so-called “sin taxes” is extremely problematic. For one, “it makes long-term planning for your budget very difficult, [especially] if you have such a large portion of your revenue coming from an activity that you’re actively trying to discourage.” Many of these states have generated relatively large shares of revenue from a tobacco tax. In 2012, state and local tax revenues accounted for at least 2.5% of total revenue in five of the nine states. By contrast, the national average tobacco tax contribution to revenue was 2.2%.

To identify the states smuggling the most cigarettes, 24/7 Wall St. reviewed smuggled cigarettes consumed as a percent of total cigarettes consumed in 2013 from the Tax Foundation’s February 2015 report, “Cigarette Taxes and Cigarette Smuggling by State, 2013.” Only states with smuggling rates greater than 25% were considered. For the Tax Foundation, a positive percentage is a measure of inflow, while a negative percentage indicates an outflow of smuggled cigarettes. Tax rates, smuggling rates from 2006, and percentage point change data also came from the Tax Foundation. Local tax rates, state and local tax revenue figures, and tax burdens are from the Tax Policy Center and are as of the most recent period available. The percent of adults who smoked in 2013 is from the Kaiser Foundation. Rainy-day funds, or reserves as a percentage of general fund expenditures in fiscal year 2014 were provided by Pew Charitable Trusts.

These are the states selling the most contraband cigarettes.