States Where the Most Kids Go Hungry 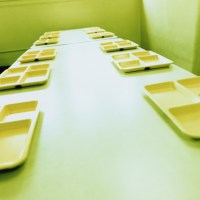 According to a report by the U.S. Department of Agriculture, 49 million people in the United States lived in households struggling to find enough food to eat. Nearly 16 million are children, who are far more likely to have limited access to sufficient food than the general population. While 15.9% of Americans lived in food-insecure households, 21.6% of children had uncertain access to food.

Feeding America — the largest hunger relief charity and network of food banks in the U.S. — created Map the Meal Gap, a study measuring food-insecurity among the general population and children at the state and county levels. While hunger remains a problem nationally, some areas of the country had nearly double the national rate. Food-insecurity rates among children were as high as 41% in Zavala County, Texas. At the state level, New Mexico led the nation with 29.2% of children living in food-insecure households.

According to Ross Fraser, Director of Media Relations at Feeding America, children are of course more vulnerable to poverty and food-insecurity because they can’t work. “You have a lot of people with large families who live in poverty, and children can’t change their financial circumstances,” he said.

The situation may also be considerably worse than it seems. Benefits from the Supplemental Nutrition Assistance Program (SNAP) have been sharply reduced since November 2013, after the data for the report was collected. Prior to the cut, 45% of all SNAP beneficiaries were children, according to Feeding America.

The states with the highest child food-insecurity rates are clustered in particular regions, and tend to be sparsely populated. These include states along the Mexican border, such as Texas, New Mexico, Arizona, as well as states like Mississippi. In general, they have fewer highways, less public transportation.

It is relatively easy to get on a bus and get to a food bank in a big city, explained Fraser. However, it’s different “if you’re living in the middle of nowhere in Wyoming, where there is no public transportation and you might be a hundred miles from the nearest food pantry, and you don’t have a working car, and there’s not a grocery store within miles and miles.”

According to Feeding America, prevalence of a number of chronic illnesses is higher among people living in food-insecure households. When it is difficult to find adequate meals on a regular basis, the chances of negative health outcomes go up. Fraser explained that “you have to have a healthy and nutritious diet in order to have a healthy active lifestyle — whenever that’s compromised, you put that at risk.” The problem can be even more severe for children. “The lack of adequate nutrition can literally change the architecture of a child’s brain,” Fraser pointed out.

Incidence of diabetes and obesity was especially high in the states with high rates of food-insecurity. “People who live in homes that are food-insecure have twice the rate of type 2 diabetes,” said Fraser. Five states with the highest food-insecurity among children — Mississippi, Georgia, Arkansas, Texas, and North Carolina — had obesity rates above the national rate of 27.1%.

To identify the states with the highest rates of child food-insecurity, 24/7 Wall St. relied on Feeding America’s report on state, county and congressional district level food-insecurity in the United States. The report measured limited access to adequate food based on a model incorporating factors such as food costs, unemployment, and poverty rates. For children, the model included eligibility for various school lunch programs. The model relied on 2012 data from the USDA, Bureau of Labor Statistics and U.S. Census Bureau. We also considered 2012 data from the U.S. Census Bureau, and the Bureau of Labor Statistics. Data from the Gallup-Healthways Well-Being Index is from 2012 and 2013.

These are the states where the most children go hungry.