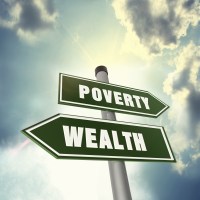 Source: Thinkstock
The U.S. federal poverty line has been determined using the same general framework since the mid-1960s. In that time, the official measure has come under criticism as an inadequate way to measure the number of people truly in need.

In an interview with 24/7 Wall St., Sheldon Danziger, president of the Russell Sage Foundation, said “It’s been common wisdom among researchers since at least the 1970s that we should rethink the official poverty measure.” Danziger added that the supplementary measure improves understanding of poverty by including items such as the earned income tax credit and food stamp benefits.

Kathleen Short, economist at the Census Bureau and author of its report on the supplemental poverty measure, explained, “The important feature of that measure is that it includes a lot of the non-cash benefits that we have in the United States to help families with low incomes.” Short added that this is useful for policymakers because it allows them “to get a better idea of how effective our safety net is for helping people.”

In fact, of the 10 states with the highest increases in poverty under the supplemental poverty measure, eight also had among the 10 highest costs of living. Further, in seven of these states, the relative cost of renting an apartment was also among the 10 highest nationally. The two states with the largest increases in poverty under the supplemental measure — California and Hawaii — were also the top two states in terms of the cost of renting a home.

Still, the role of non-cash benefits programs is very important in shaping the supplemental poverty levels in many states. For example, in many of these states residents are far less likely to receive an earned income tax credit. The Internal Revenue Service (IRS) estimates that 79% of eligible Americans filing tax returns received a credit in the 2010 tax year, the most recent year for which data is available. However, in many of the states where poverty is most undercounted, the percentage of eligible filers receiving a credit is far lower. In Nevada, just 71.5% claimed their credit, while in California just 71% did, among the lowest rates in the U.S.

High levels of out-of-pocket medical expenses are also a factor contributing to higher supplemental poverty levels in many states. In fact, according to the Census Bureau, 11 million Americans fall into poverty under the supplemental measure because of these expenses, more than for any other reason. While some states where the poor are undercounted have high rates of health insurance coverage, others do not. Notably, in Nevada and Florida, 20.7% and 20% of the states’ populations were uninsured, respectively, as of 2013. These were the second- and third-highest rates in the nation.

In addition to the huge role played by out-of-pocket medical costs, Beth Mattingly, director of research on vulnerable families at the Carsey School of Public Policy, identified work-related costs as another expenditure that leads many families to struggle. Mattingly said that much of these costs are related to transportation, which can be high for people who live in cities, as well as in rural areas. In cities, “to take the train, then take the bus, it really adds up,” Mattingly said. Yet, in more rural areas, long drives, and the wear-and-tear on vehicles can also increase costs.

In order to determine the 10 states where poverty is worse than you think, 24/7 Wall St. reviewed data from the Census Bureau’s recent release, “The Supplemental Poverty Measure: 2013.” We then ranked states on the difference between the supplemental poverty and the official poverty measure. The supplemental measure uses an updated definition of households, as well as poverty thresholds that incorporate area housing costs. Further, while the official poverty rate is calculated using gross before-tax cash income, the supplemental measure is adjusted for noncash benefits, taxes and tax credits, work expenses, out-of-pocket medical costs and child support payments.

Data on Social Security, cash public assistance, Supplemental Security Income, SNAP benefits — or food stamps — and other factors included in measuring the social safety net are from the Census Bureau’s 2013 American Community Survey. Data on Unemployment Insurance claims are from the Department of Labor. Data on Earned Income Tax Credits are from the IRS. EITC participation rates are as of the 2010 tax year, while average EITC amounts are for the 2013 tax year. Figures on regional price parities — representing the differences in cost of living and cost of rent — are from the Bureau of Economic Analysis for 2012.

These are the states where poverty is worse than you think.