10 Cities With the Worst Traffic 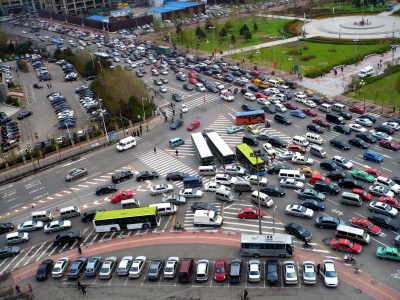 Source: Thinkstock
Urban commuters collectively lost 6.9 billion hours, and 3.1 billion gallons of fuel to traffic delays last year. Excess fuel and lost productivity cost American commuters $160 billion in 2014, up from $114 billion in 2000, and $42 billion in 1982. According to a recent study, the problem is even worse in a handful of large urban areas.

The 2015 Urban Mobility Scorecard, a report released jointly by the Texas A&M Transportation Institute, and Inrix, a traffic data collection company, identified the Washington D.C. urban area as the most congested city in the country. The Los Angeles urban area, where the typical auto commuter spends an additional 80 hours behind the wheel in traffic, was a close second. Some of the country’s largest urban areas are more congested than ever.

Click here to see the cities with the worst traffic.

After a long recovery, jobs that had disappeared with the recession are returning to American cities. The workforce has largely returned to full strength, and the nation’s aging transportation infrastructure is not keeping up with demands of urban populations. In 1982, commuters in major urban areas lost an average of 18 hours annually due to traffic delays. By 2014, the number had more than doubled to an average of 42 hours.

Based on data from 1982 through last year, the researchers argued that “short of major economic problems, congestion will continue to increase if projects, programs, and policies are not expanded.”

Traffic congestion around major American cities also brings heavy costs. In contrast with the nationwide average yearly loss of $960 per auto commuter from delays, the congestion cost in all of the 10 most congested cities exceeded $1,300 per commuter. In the D.C. area, it was $1,834, nearly double the national average.

According to researchers at INRIX, the financial burden from traffic congestion is essentially a type of tax, and does not even fully capture the true cost of traffic delays. “The negative effect of uncertain or longer delivery times, missed meetings, business relocations and other congestion-related effects are not included.”

Generally speaking, the larger the city the worse the congestion. Eight of the 10 most congested urban areas have a population of over 3 million, including the areas home to the nation’s three largest cities, New York, Los Angeles, and Chicago. Though the cities with the worst congestion are spread throughout the country, four are located in California.

Many urban commuters avoid suffering through long waits in traffic by resorting alternative modes of transportation. In New York City for example, nearly a third of all commuters use public transportation, a larger share than those who drive, and a higher percentage than in any other U.S. city. Not every city has a reliable public alternative to driving, however. In Houston, Texas, the eighth most congested city and one notable for its sprawl, less than 3% of commuters use public transit.

While commuters in the D.C. area suffered longer than anyone else, the effects of congestion can be measured in many ways. The study uses a measure called the Travel Time Index, or TTI, which is the “ratio of travel time in the peak period to travel time at free-flow conditions.” For example, an index of 1.30 indicates that what would be a 20-minute drive without traffic would take 26 minutes in a peak period.

To determine the 10 most congested cities in America, 24/7 Wall St. reviewed the highest estimated number of hours lost per auto commuter annually to traffic delays in 470 U.S. urban areas. Data was provided by the 2015 Urban Mobility Scorecard, a report released jointly by the Texas A&M Transportation Institute, and Inrix. Total hours lost to delays, total and per auto commuter excess fuel consumed, as well as estimated costs associated with congestion also came from the Scorecard. Average gas prices for the year, which were a component of the cost calculation, also came from Inrix and Texas A&M. The researchers also created three indices measuring the degree to which commuters needed to plan ahead for traffic delays (Freeway Planning Index), how long driving takes during peak hours versus normal hours (Freeway Travel Time Index), and the estimated level of stress during rush hours (Freeway Commuter Stress Index). used the estimated time lost to traffic delays annually per driver in major urban areas across the country. We also reviewed average commute times, the percentage of workers who used public transit, and the percentage of workers who walked to work from the U.S. Census Bureau’s 2013 American Community Survey.

These are the cities with the worst traffic.