In the 1930s, the Memphis Housing Authority began a series of urban redevelopment programs, frequently referred to as “slum clearance.” The city tore down residences in black middle class neighborhoods. The city justified the plan with claims these building were decrepit and unsafe, but in actuality these family homes were part of a hard-won 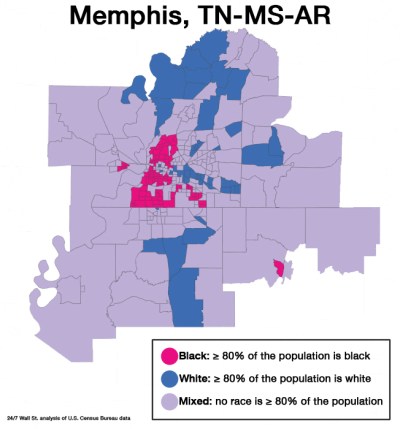 black community. In its place the housing authority built a massive public housing complex. Not only did the city disregard the pleas of black residents, but officials effectively
exacerbated segregation by dramatically increasing the amount of low-income housing.

Nearly 46% of the Memphis population is black, one of the largest black populations of any urban region. Nearly half of these residents live in a neighborhood that is at least 80% black. Memphis’ white residents are about twice as likely to graduate from college, earn about twice as much money, and are only about one-third as likely to be unemployed. 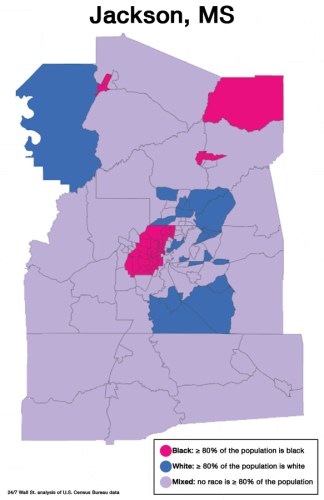 With 47.7% of Jackson residents identifying as African American, the area has the largest black population of any
large U.S. metro area. Jackson is one of the few U.S. regions where black people outnumber whites. Jackson is also
nearly the most segregated city in the country. Of the 278,370 African American area residents, close to half live in predominantly black neighborhoods.

Chicago is one of the nation’s largest and most diverse cities. Perhaps as a result, the number of racially homogenous neighborhoods is relatively low. Of the 2,200 tracts in the metro area, fewer than 1,000 have 80% or more people of a single racial group. Still, black area residents are more likely than not to live in predominantly black neighborhoods, which helps make the Chicago metro area one of the most racially segregated areas in the country. While segregation of white and black people is uniquely pronounced in the 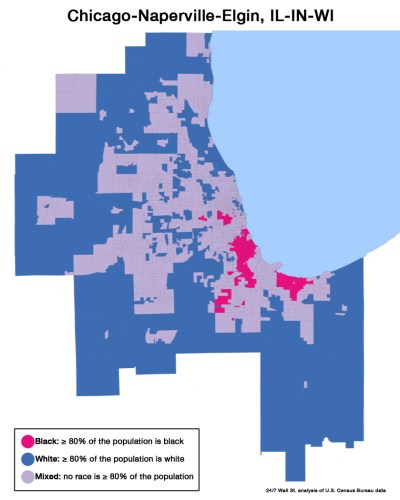 United States, other racial groups are also isolated from one another. Like several other large U.S. cities, Latino immigration to Chicago accelerated in the 1990s, and today,
Spanish-speaking and white residents live relatively separately. More than one in every five Hispanic area residents live in predominantly Hispanic neighborhoods, the sixth
highest such percentage of large metros.

Social and economic gaps between black and white Americans exist across the nation virtually without exception. In the Chicago area, the gaps are especially wide. The black poverty rate is more than three times that of white area residents, one of the largest such disparities nationwide.

By using race to determine home loan eligibility, the FHA deliberately segregated the Detroit area over the course of the mid-20th century. The racist policies are memorialized by a wall originally built along 8 Mile Road to separate black and white neighborhoods.

While the wall no longer separates black and white residents, still today few areas are more divided along racial lines 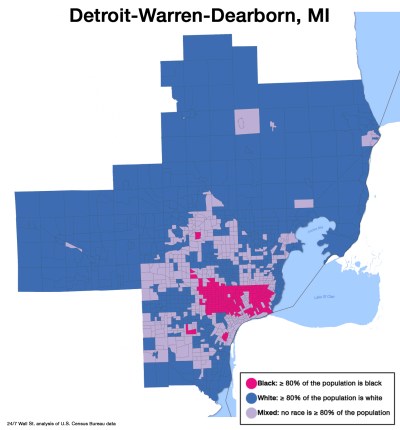 than the Detroit metro area. More than 60% of residents live in neighborhoods dominated by their respective racial groups, double the average percentage nationwide. Of African American area residents, 57.7% live in predominantly black neighborhoods, the highest such share of any metro considered. As is the case in U.S. metro areas virtually without exception, black Detroit area residents are considerably more likely to live in poverty than their white peers. The black poverty rate, at 33.3%, is a great deal higher than the white poverty rate of 11.4%.