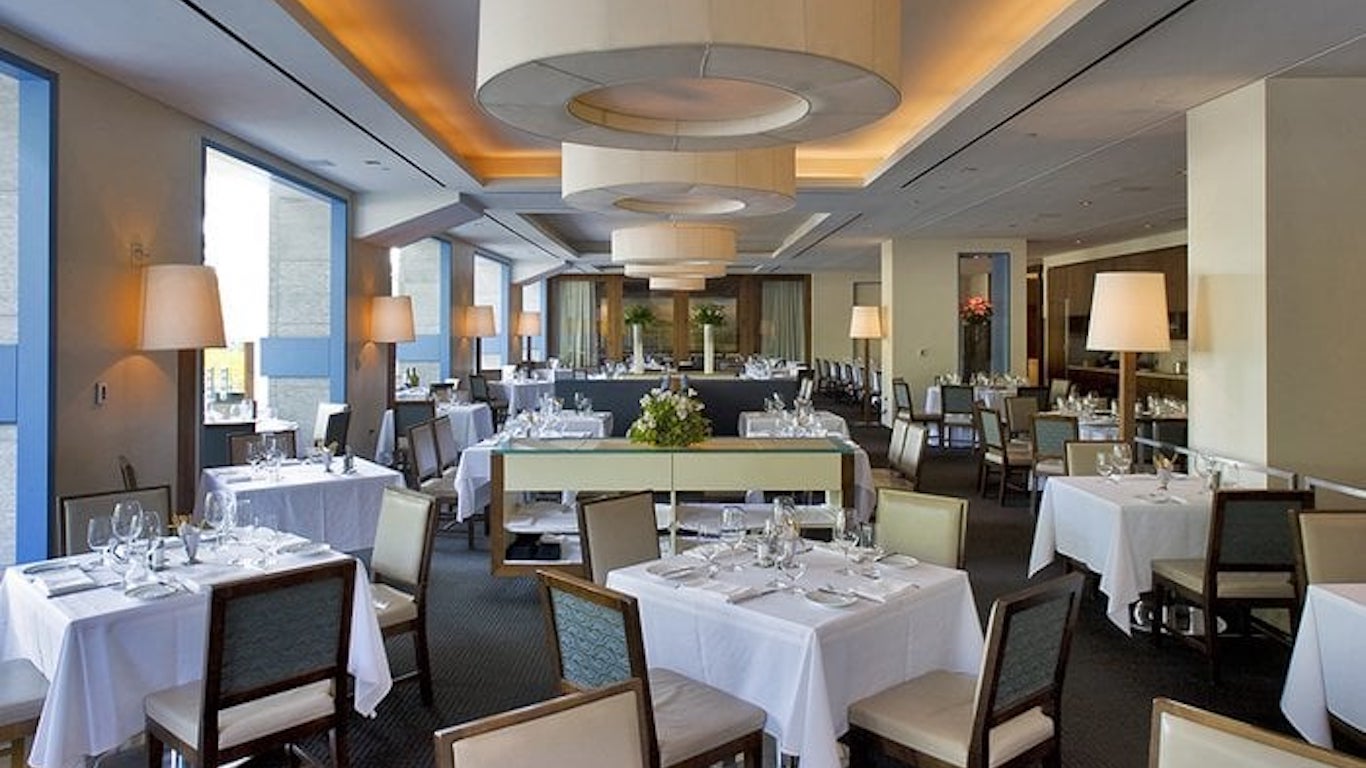 Charlie Palmer, who is best-known for his Michelin-starred Aureole in New York City — there is another one in Las Vegas — presides over 17 restaurants and bars, in New York, California, Nevada, and D.C., half a dozen of them branded as Charlie Palmer Steak. Appetizers here include little gem lettuce Caesar with prosciutto, a quail egg, and Spanish anchovies; grilled asparagus with a 62-degree egg, toasted brioche, pecorino, and black garlic; and grilled Spanish octopus with fingerling potatoes and avocado purée. There are six steaks, provenance not specified, along with a Mishima “Manhattan cut” American wagyu strip steak and an A5 Miyazaki steak from Japan, served with red-veined sorrel and soy-wasabi dipping sauce. 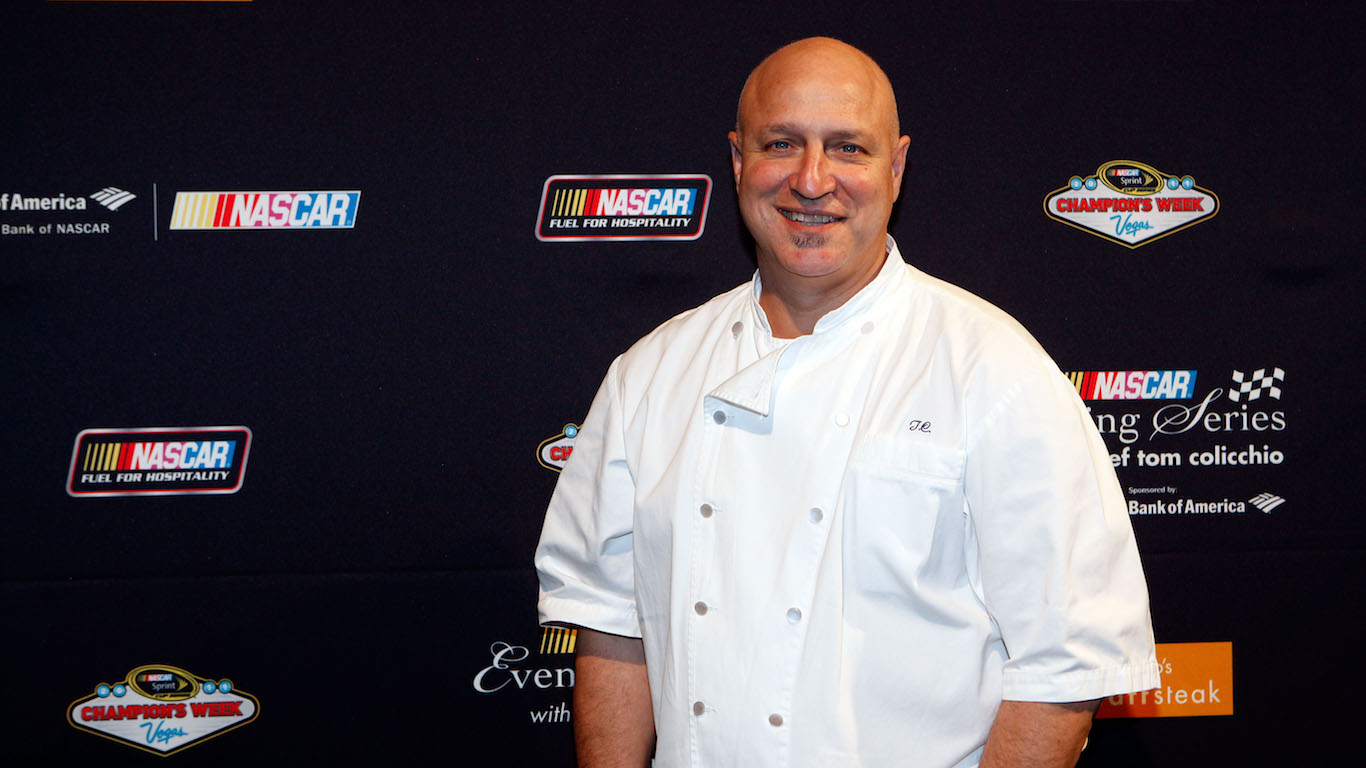 Tom Colicchio might be better known today as a TV personality — for his role as head judge on “Top Chef,” among other appearances — than as a chef, but he is a five-time James Beard Award winner and helms an empire of half a dozen restaurants, including this one and another Sin City meat emporium called Heritage Steak. He doesn’t overcomplicate things with his menu, but offers straightforward appetizers like Persian cucumber salad with watercress and ginger, shaved fennel with Castelvetrano olives, and Maine lobster bisque with tarragon. The impressive beef selection includes 15 different steaks, among them both domestic and Japanese wagyu and a 22-ounce dry-aged T-bone, as well as 24-hour-braised short rib with cipollini onions. 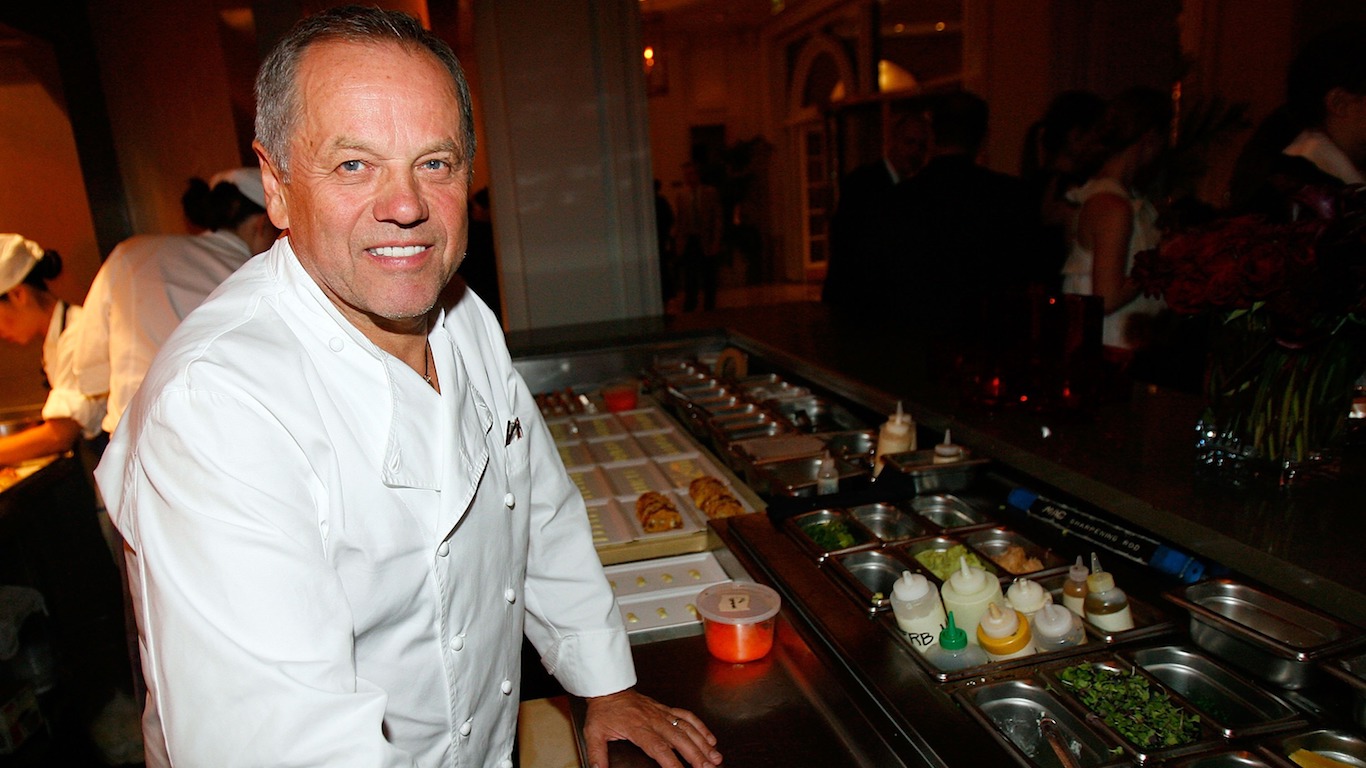 Having revolutionized the American restaurant scene with Spago and reinventing Chinese food with Chinois on Main, Wolfgang Puck, probably the best known chef in the country, turned his attentions a few years back to steakhouses. The sleek minimalist decor by architect Richard Meier is anti-steakhouse in feeling, and the menu provides plenty of tasty surprises. To begin with there items such as American wagyu sashimi, sunchoke soup with smoked trout, Dungeness crab with Louisiana shrimp and horseradish. Then, there is an impressive catalogue of steaks, 17 in all, including Illinois corn-fed, dry-aged Nebraska corn-fed, Australian grass-fed, Idaho wagyu, and Japanese wagyu. Among the sides are celery root with parsnips, turnips, and wildflower honey, and Canadian cheddar mac & cheese. Puck now has CUT steakhouses in New York, London, Las Vegas, Bahrain, and Singapore, as well. 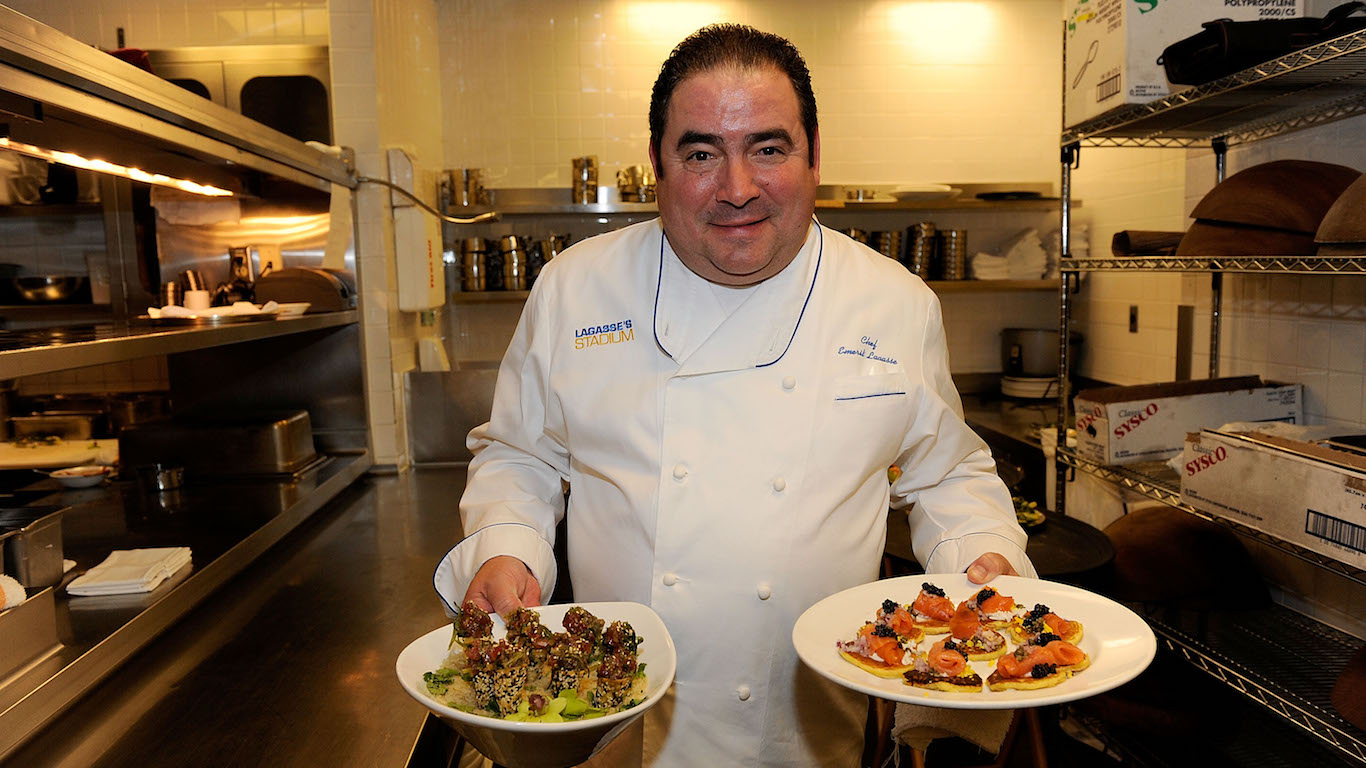 This “Creole steakhouse” takes its name not from the fabled New York City restaurant that introduced the city to fine dining in the mid-19th century but from another famous Delmonico, opened in New Orleans in 1895. That place was revived in 1998 by Emeril Lagasse, the immensely popular “new New Orleans” chef and TV personality. He later christened this steakhouse after that establishment, giving it plenty of NOLA flavor — such as barbecue shrimp with rosemary buttermilk biscuits, bigeye tuna tartare with Louisiana caviar, traditional gumbo — as well as a good selection of steaks. The seemingly inevitable Japanese wagyu is available, but the showpiece is a 20-ounce Angus chateaubriand for two, carved tableside. 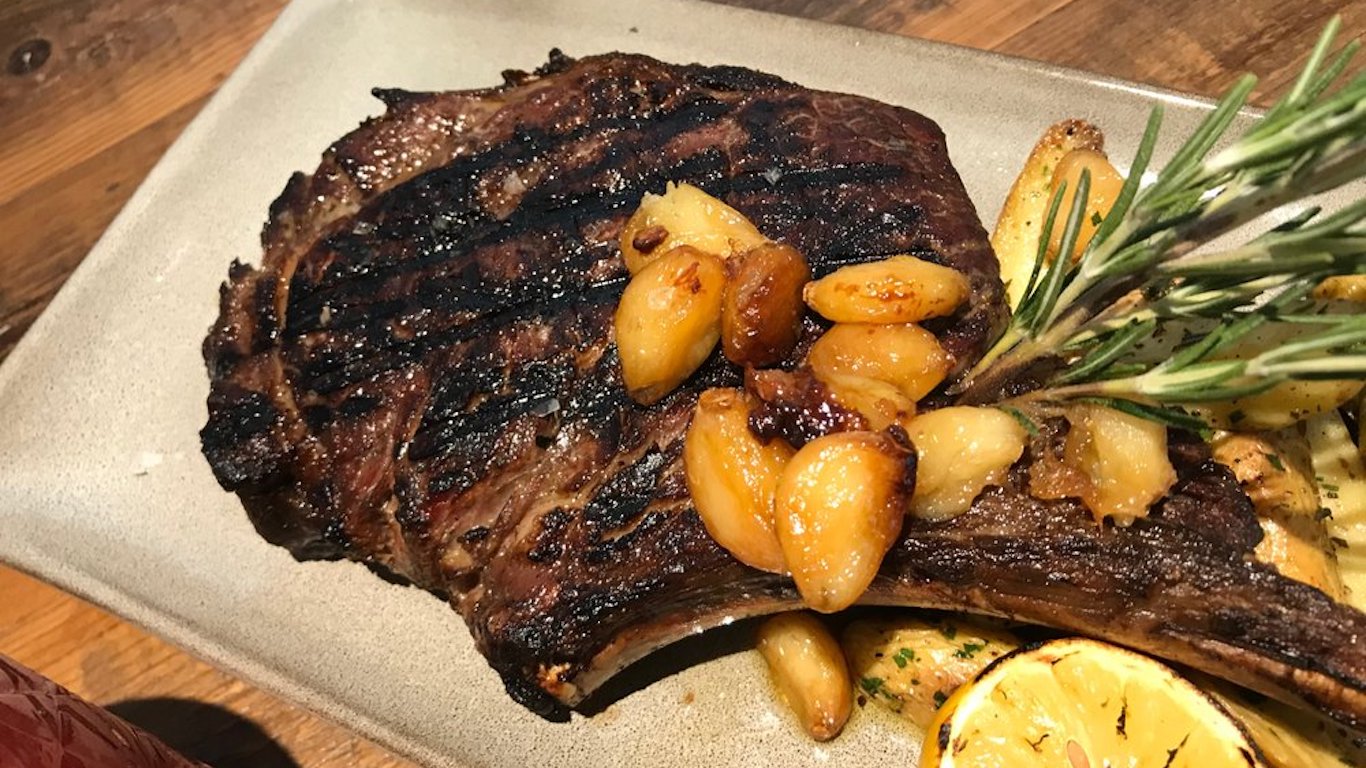 Source: Photo by Dorona via Yelp

Fabrizio Aielli was a star of the Italian restaurant scene in Washington, D.C. with his Goldoni restaurants, but he moved to this affluent Florida community in 2008 to open Sea Salt, quickly hailed as one of the region’s best. Today, he also owns a more casual place called Barbatella here as well as a Sea Salt in St. Petersburg, but he added this “Modern Italian Steakhouse” to his portfolio earlier this year. He is so serious about meat that he offers a whole separate steak menu, with some 20 choices, counting different cuts and sizes. And perhaps because he sometimes gets an older clientele, four steaks are offered in modest five-ounce portions. Nebraska Black Angus, grass-fed North Carolina ribeye, and Florida wagyu are among the choices. The “Italian” part comes in with such dishes as crispy calamari with brussels sprouts and pizzaiola sauce, eggplant parmigiano dip, half a dozen pastas, and burrata whipped potatoes.