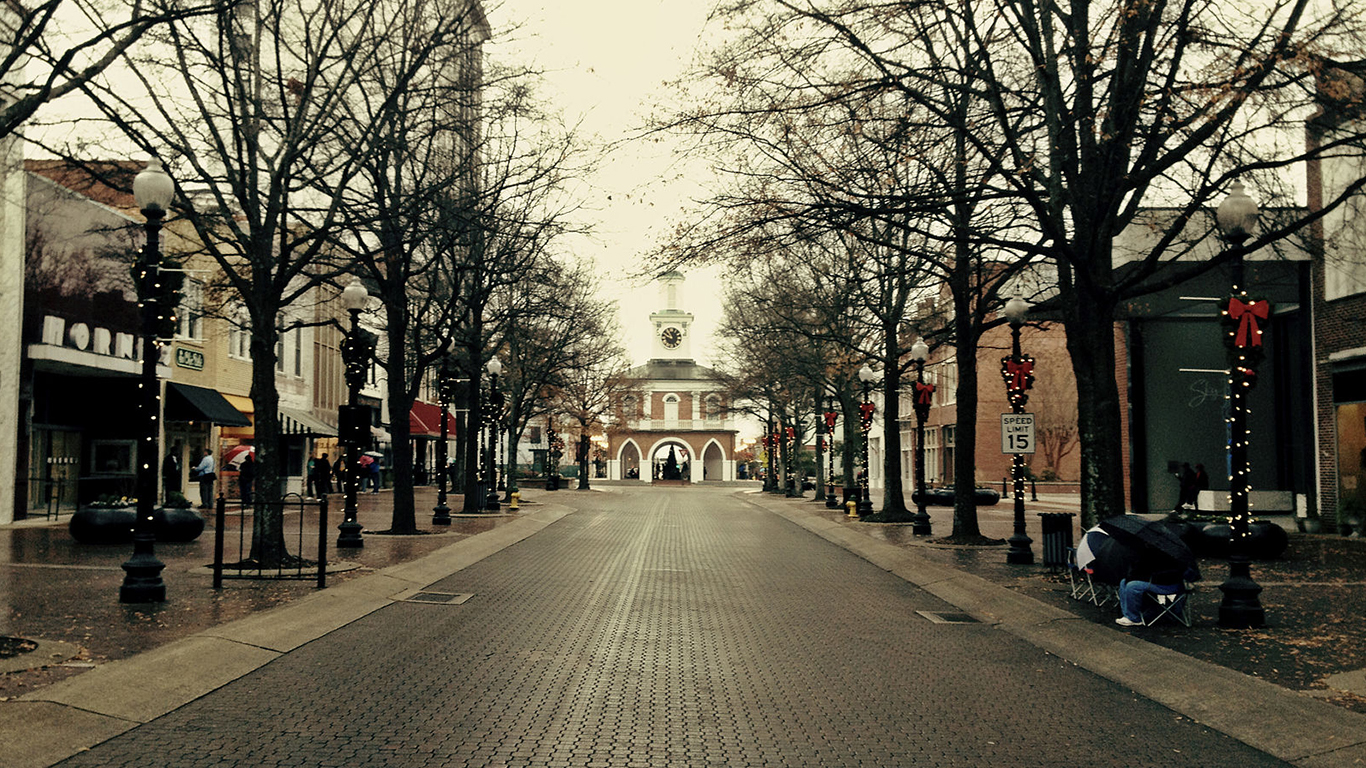 In 1816, one Francis W. Waldo — possibly a former reporter from Massachusetts — founded a four-page weekly called the Carolina Observer in Fayetteville, south of Raleigh, North Carolina.

Eight years later, a newspaper veteran named Edward Jones Hale bought it, publishing his first issue in 1825 and remaining the paper’s owner and editor for the next 40 years, changing its name to the Fayetteville Observer in 1833.

Hale’s sons, Peter Mallett, Edward Joseph, and Edward Jones, Jr., joined the paper in 1850. The Observer was staunchly pro-Confederate during the Civil War, and in 1865, General Sherman ordered his troops to burn the paper’s offices and presses. Hale and his sons moved to New York City, where they started a book publishing business. In 1883, Edward Jones, Jr. returned to Fayetteville and relaunched the Observer, and it stayed in the Hale family until 1919.

In 1923, after several brief ownership changes, it was bought by a New York City newspaperman named William James McMurray, who gave it over the following year to his brother-in-law, Charles Wilson. Wilson’s son-in-law, Richard Lilly, became publisher, and was succeeded in turn by his own son-in-law, Ramon Yarborough.

Yarborough launched a new local paper, the Fayetteville Times, while continuing to run the Observer, and the two publications merged in 1990. In 1999, the Times reclaimed its historic name, becoming the Fayetteville Observer once more. Yarborough retired in 2000, and his place was taken by Charles W. Broadwell, a great-grandson of Charles Wilson. The GateHouse chain bought the Observer in 2016. 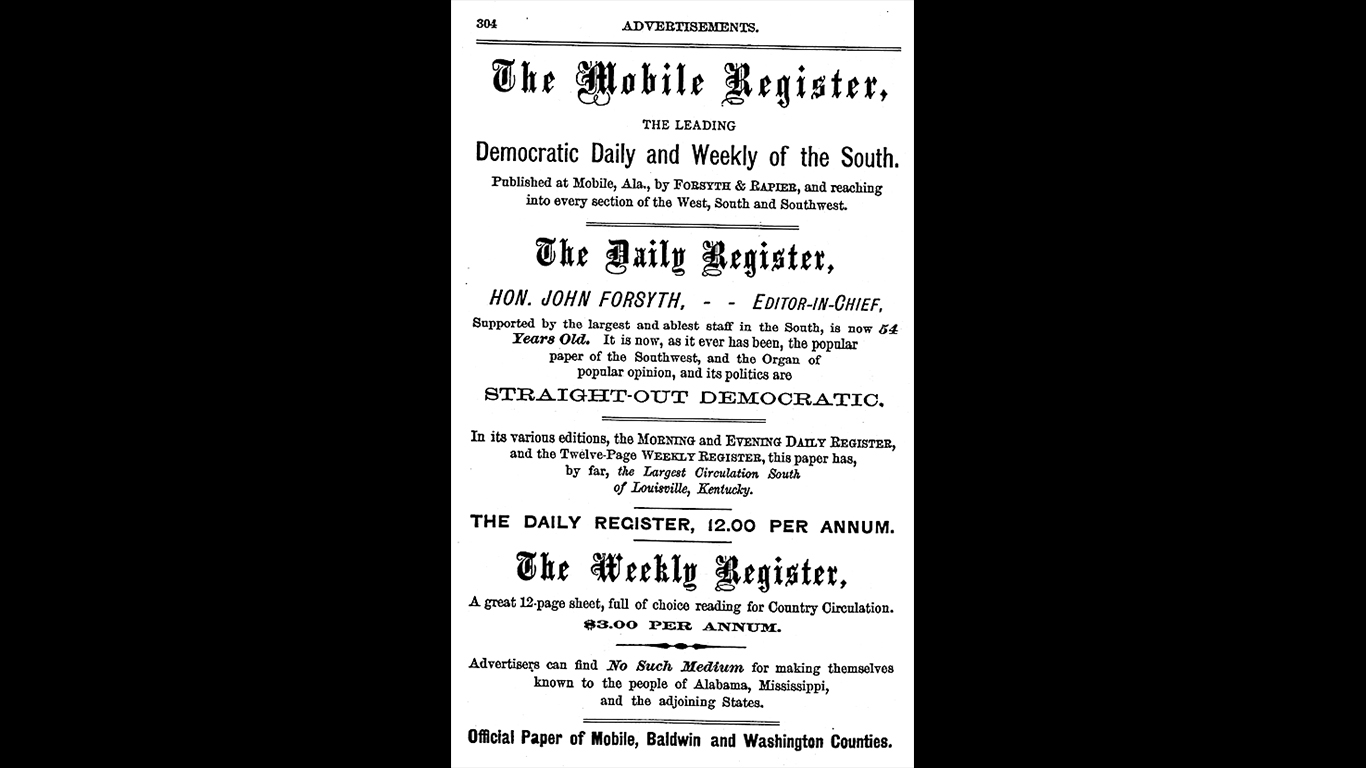 James Lyon, the eldest son of an Irish immigrant who became a printer-publisher in Vermont and later a U.S. congressman, founded newspapers in Vermont, Virginia, Georgia, Louisiana, and Washington, D.C. before ending up in Mobile, Alabama, where he created the Mobile Gazette in 1813.

In 1821, a Boston-born Savannah merchant, Jonathan Battelle, joined forces with an Alabama newspaperman, John W. Townsend, to found a rival publication, the Mobile Commercial Register. After publishing the Gazette for several years, Lyon moved on to South Carolina, where he founded yet another paper, and the Register absorbed the Gazette.

There were frequent ownership changes over the next century, and the Register changed names several times, along the way subsuming four other local papers. In 1929, Ralph B. Chandler, a former advertising manager of the Cincinnati Post, began publication of the Mobile Press. He was successful enough to be able to buy the Register three years later, keeping the two separate during the week — the Register in the morning, the Press in the evening — with a combined Sunday edition called the Press-Register.

S.I. Newhouse’s Advance Publications, Inc. bought the papers in 1966, folding the afternoon Press in 1997 and combining the Press-Register with its two other Alabama papers, the Birmingham News and the Huntsville Times, under the Alabama Media Group umbrella in 2012. What is now the Alabama Press-Register has an online presence through AL.com and publishes a print edition on Wednesdays, Fridays, and Saturdays. 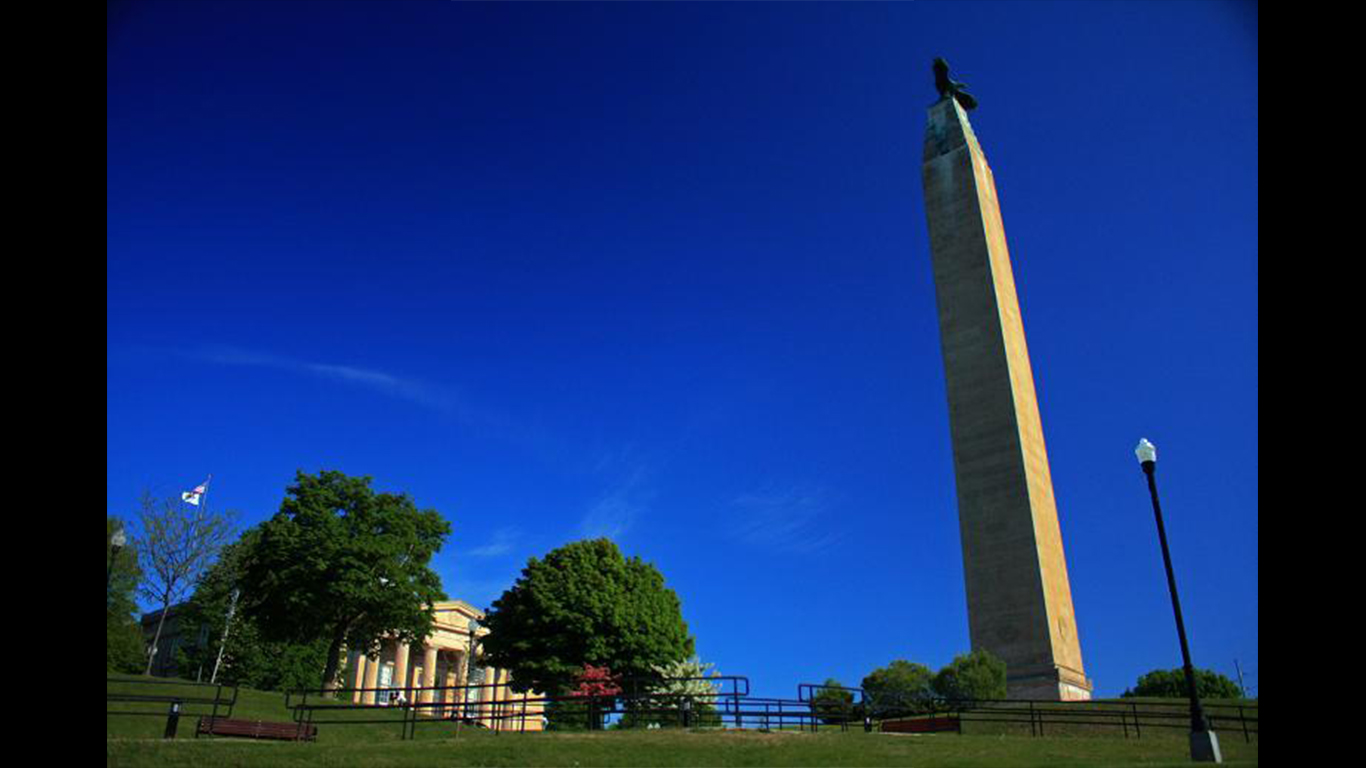 In 1809, a man named Samuel Lowell launched a newspaper called the American Monitor, supporting the Republican — then the Democratic-Republican — Party, in the northeastern New York state town of Plattsburgh. When Lowell got married in 1811, however, he converted to the rival Federalist Party views of his wife’s family and began attacking the Democratic-Republican president, James Madison, in print. The party was outraged and met to organize the publication of a paper that would espouse their cause.

The secretary and editor of the new enterprise — a weekly called simply the Republican — was Colonel Melancton Smith, a strong anti-Federalist. Two years later, Azariah Cutting Flagg, a so-called radical Democrat-Republican who had helped print the original publication, took over the editorship, and the paper became the Plattsburgh Republican. 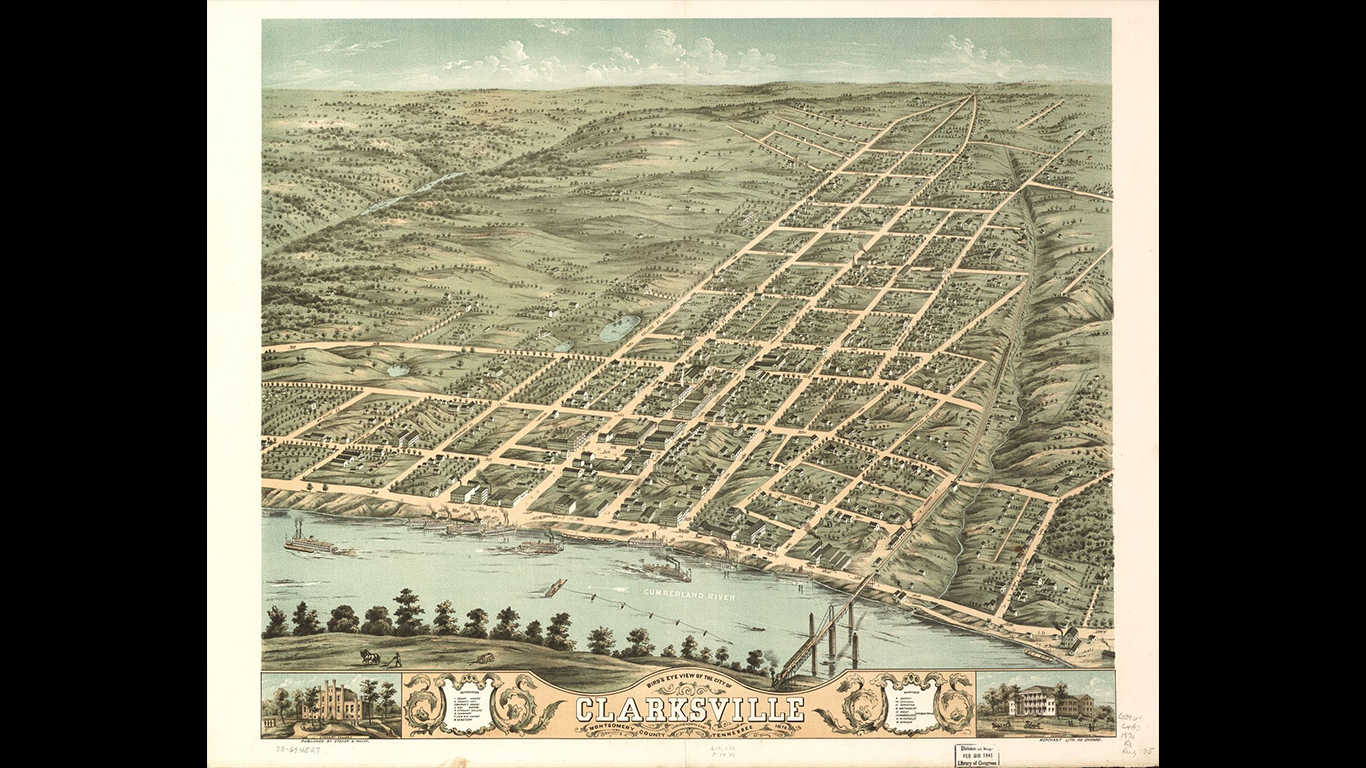 It’s sometimes claimed that the Clarksville Chronicle was first published, in this Tennessee city on the Kentucky border, northwest of Nashville, in 1808. However, the earliest extant copies of the paper date from 1818, and the volume numbers suggest a launch date of 1815 — and a story from 1993 in its offspring, the Leaf-Chronicle, admits that “Little is known concerning the operation of the paper in its earliest years.”

The mystery continues: Founding of the Chronicle is usually credited to George Crutcher, who was probably the son of a one-time Clarksville city clerk, along with an associate, William Kendall. It’s also possible, though, that it was started by Francis Richardson, possibly the publisher of another local paper, the Rising Sun. Ewing P. McGinty, who later edited the Nashville True Whig, oversaw the Chronicle from 1836 until 1849, when the post was taken over by Robert Warner Thomas, who became renowned throughout the state for his political articles, which were often reprinted by other publications.

The Chronicle — which went through several name changes in the 1850s and ’60s — suspended publication during the Civil War, starting up again in 1865. In 1869, a new publication, the Tobacco Leaf, appeared in Clarksville. Launched by M. V. Ingram, who had started another paper in nearby Springfield, it was dedicated to supporting the local tobacco industry. The two papers were on different sides politically, and for years were strenuous competitors. In 1878, however, a huge fire destroyed about a third of Clarksville, including the Tobacco Leaf offices, and the owners of the Chronicle offered their rival use of their facilities. 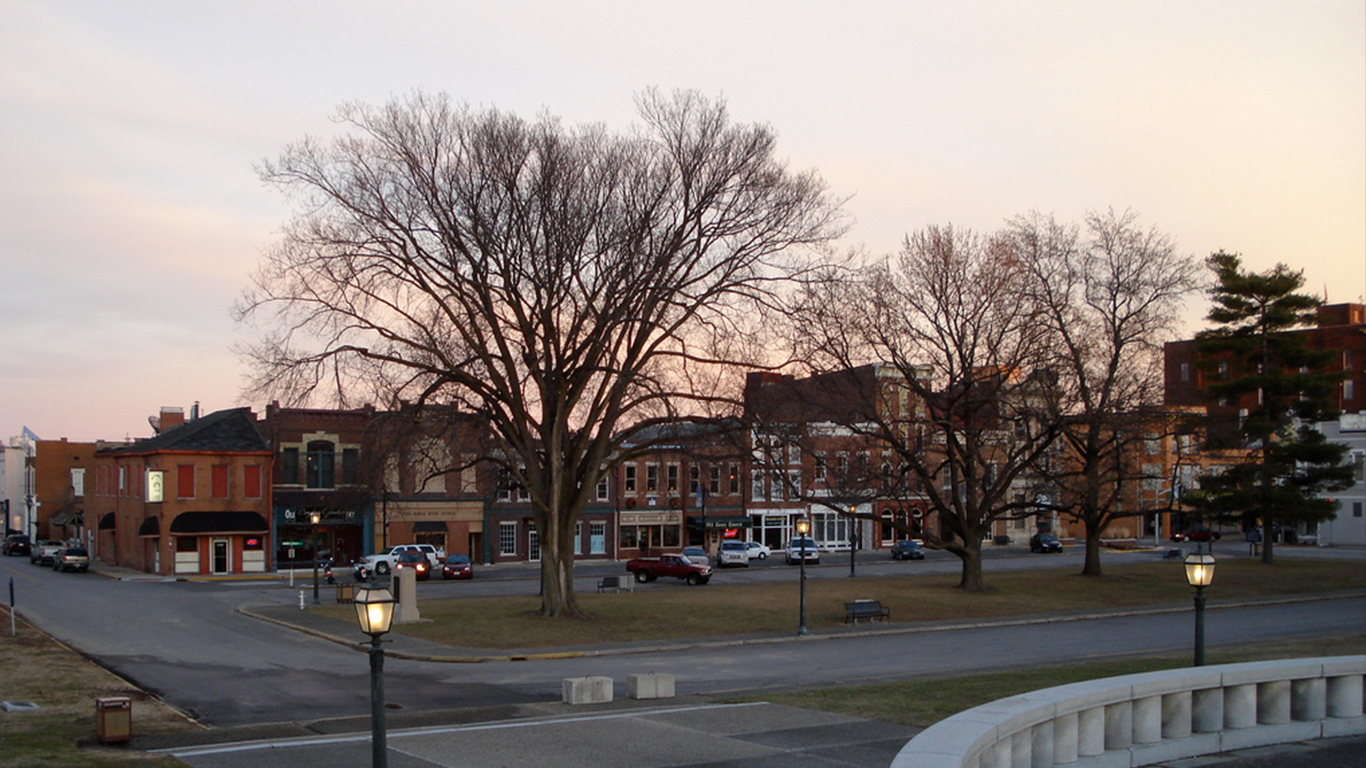 In 1804, the governor of the Indiana Territory — William Henry Harrison, who would later become the ninth president of the United States (and die of pneumonia after only a month in office) — offered a salary of $500 a year to any printer who would set up shop in Vincennes, the territorial capital, to publish laws and legal advertisements. A young journeyman printer from New Jersey, Elihu Stout, got the job, and published the first issue of what he dubbed the Indiana Gazette on the Fourth of July, 1804.

The Gazette offices were destroyed by fire in 1806, and Stout was out of business for a year, but he returned with a new paper, the Western Sun. Stout continued to run the publication, changing its name to the Western Sun and General Advertiser in 1817. According to local legend, a 21-year-old Abraham Lincoln stopped by the office on his way from Indiana to his new home in Illinois and helped print the edition of March 6, 1830.

Stout sold the Sun to John R. Jones, former publisher of the People’s Friend in Covington, Kentucky, in 1845. He changed the name several times before selling it in turn, in 1856, to George E. Green, who restored its former name. Several other owners took it over, one of whom, R. E. Purcell, started a second paper called the Vincennes Sun.

Another local publication, the Vincennes Commercial, appeared in 1877. The paper attracted attention in the 1920s for its campaign against the Ku Klux Klan, which had become important politically in Indiana. In 1930, newspaper publisher Eugene C. Pulliam, founder of Central Newspapers, Inc., bought the papers, merging them in 1931. Gannett, owners of USA Today and many other media properties, bought Central — and the Sun-Commercial — in 2000.