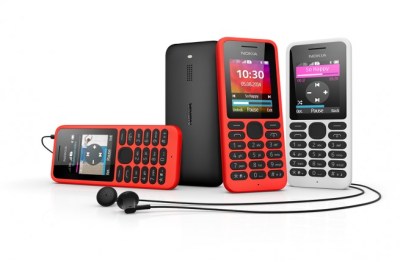 Source: Microsoft Corp.
In a press release issued at 3:01 a.m. Monday morning, Microsoft Corp. (NASDAQ: MSFT) announced the first — and quite possibly the last — mobile phone to bear the name of the Finnish handset maker that has now become a division of the Redmond, Washington giant.

The Nokia 130 may be the cheapest phone ever to carry the name. It costs just €19 (about $25) and will be available in selected markets, including China, Egypt, India, Indonesia, Kenya, Nigeria, Pakistan, the Philippines and Vietnam. The phone is aimed at the first-time phone buyer, and although it is not a smartphone like the Apple Inc. (NASDAQ: AAPL) or the Samsung Galaxy S5, it’s likely to find a wider consumer audience in its target markets than the $700 price tag on the top-of-the-line devices.

The Nokia 130 includes a 1.3-inch(!) color display and will play back up to 16 hours of video or music on a single charge. And, get this, a single charge will last for 36 days in standby mode (that is not a typo).

The phone does not offer Internet connectivity, but Microsoft seems willing to take a chance that the phone will be a hit among first-time buyers in developing countries. Microsoft cites a Strategy Analytics statistic that 300 million phones in this category are sold every year as evidence for what the company hopes will be big demand for the Nokia 130. The company’s vice-president for phones said:

Microsoft remains committed to delivering market-leading mobile innovation at each and every price point. It is estimated that at least 1 billion people in the world still do not have a mobile phone, while at the same time there is increasing demand for reliable backup phones in both mature and high-growth markets. With handsets like the Nokia 130, we see tremendous potential to deliver the experience of a ‘mobile-first’ world to people seeking their first device, and we continue to invest in ultra-affordable devices that will introduce people to a ‘cloud-first’ world through Microsoft services such as Bing, Outlook.com and OneDrive.

The phone is set to begin shipping in the third quarter.