Seagate Technology PLC (NASDAQ: STX) was a big earnings winner, and what makes this recovery strength different from the rest of this group of strong tech stocks is that it remains drastically lower than its 52-week high. Its earnings report was quite strong. RBC Capital Markets recently raised its target to $34 from $31, but to start off the month Jefferies raised its target to $38 from $32. Seagate’s acquisition of Dot Hill Systems is even being challenged by a small group of Dot Hill shareholders. Another thing that makes Seagate so different is that it is valued at only about 11 times the current year’s earnings expectations.

It may be Chinese, but SINA Corp. (NASDAQ: SINA) saw a gain of almost 4% on Friday’s. The current driving force here is that SINA has authorized the distribution of Weibo shares on a pro rata basis, and the company is decreasing its stake to 51% from 54%. SINA is valued at close to 80 times expected year’s earnings expectations.

Because Symantec Corp. (NASDAQ: SYMC) has been a disappointment for so many years and range bound for so long, it feels hard to ever get excited about. Still, its shares have kept rising after its plan to break back up and after acquiring Blue Coat for more data security. Again, technicians tell you the news doesn’t matter — or at least that the market tells you what you need to know. Symantec has been around forever, but maybe analysts have a hard time valuing this one right now with so much change happening. Still, Symantec is valued at almost 22 times expected 2016 earnings.

The market value of Momo Inc. (NASDAQ: MOMO) is now $4.6 billion, and was shares traded up yet again on Tuesday at the start of the first real week of September. Momo is a mobile-based social networking platform located in China, and its stock is very thinly followed by analysts but valued at close to 70 times expected earnings. JPMorgan recently started Momo as Overweight with a $26 target, a price that is already close to coming to fruition.

A chart montage (expandable) from StockCharts.com has been offered below, using the Spyders and Nasdaq 100 ETFs for a reference. 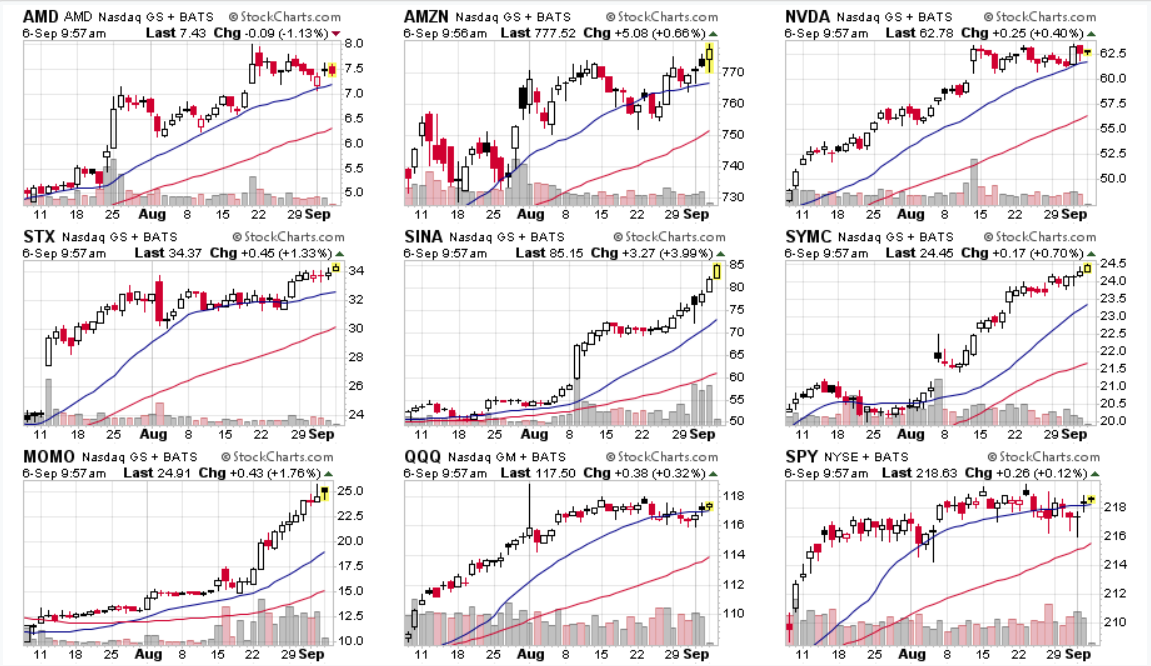