On May 20, Apple Inc. (NASDAQ: AAPL) and Google released an application programming interface (API) that will allow governments to build contact tracing apps designed to slow the spread of COVID-19. Neither Apple nor Google will have access to data collected by the apps.

The new feature is called Exposure Notifications and can be activated or deactivated by the users. The API has been released with an iOS 13.5 update for iPhone users. Android users running Android 6.0 or later can download the feature from Google Play.

In a joint statement issued Wednesday, the two companies emphasize that Exposure Notifications is not an app but a toolkit that public health agencies can use to build apps that preserve personal privacy while at the same time providing rapid notifications of exposure to the coronavirus to both users and public health officials.

The companies also emphasize that the smartphone user controls the app. By enabling the feature, a user authorizes a public agency to notify users that they have come into contact with someone who has reported a positive test from COVID-19.

Contact tracing apps work by communicating over a Bluetooth connection without intervention from users. The app essentially keeps a log of everyone a user encounters. If a contact tests positive for COVID-19, and if the contact has enabled the app, the contact reports the positive result to the public health agency.

The following diagram from the Financial Times illustrates how the notification process runs to completion. 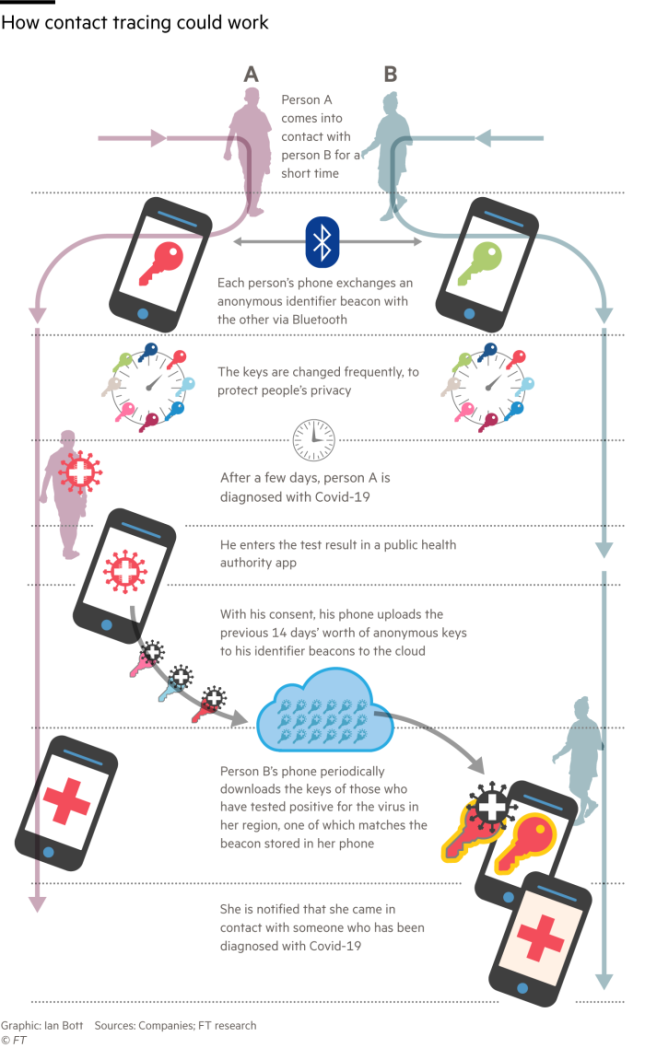 In order for contact tracing to succeed in slowing down the spread of COVID-19, smartphone users need to download and use the apps. Apple and Google have tried to encourage that by implementing what the companies call “strong privacy protections.” The short version: More users will generate better data.

The Universe of Smartphone Users Is Limited

One of the weaknesses of the contact tracing system is that it only works on newer phones. In the case of Apple iPhones, that means only devices that run iOS 13 or higher. The primary reason for the limitation is battery usage.

New Android phones and iPhones use a low-power Bluetooth chip that minimizes the drain on battery life. The installed base of mobile phones is estimated to be north of 5.1 billion. That total includes smartphones and so-called cheaper feature phones.

As many as 3.5 billion mobile phones may not be able to use exposure notification apps because either they don’t support Bluetooth or the Bluetooth chip is a power-hungry older version. Because battery life is so important to users, anything that significantly shortens that life (and that can be disabled) will not get much traction.

Last August, the U.S. Business Roundtable, an association of CEOs of U.S. companies representing more than 16 million employees and more than $7 trillion in annual revenues, issued a statement signed by 181 CEOs who have committed to “lead their companies for the benefit of all stakeholders – customers, employees, suppliers, communities and shareholders.”

Apple CEO Tim Cook was among them.

The statement generated a lot of comments, pro and con. The Exposure Notifications API from Apple and Google does seem to adhere to the idea of providing benefits for stakeholders who do not own Google or Apple shares.

Apple stock’s gain on the day the API was released was about 1.9%, better than the Dow Jones industrials’ gain of about 1.3%. Google shares traded essentially flat. Neither is a large move, in either direction, but perhaps that is an indication that good deeds that offer no financial gain at least won’t be punished for doing something that only costs a company money.

Now that the two tech giants have delivered the toolkit to enable contact tracing, it’s up to government officials to develop the apps that will implement the programs. North Dakota and South Carolina already have said they are building apps with the new toolkit. Alabama is also building a contract tracing app, but it hasn’t revealed its technology.

Like stay-at-home orders and social distancing rules, contact tracing aims to slow the spread of COVID-19. The slower it spreads, the better able hospitals will be to take care of patients and the more time there is to develop a vaccine. Contact tracing is an essential addition to stopping the pandemic.

Apple and Google have figured the cost is worth it. Will shareholders?