Ever since Apple Inc. (NASDAQ: AAPL) announced last fall that it would introduce its App Tracking Transparency feature this year, some app developers have pushed back against the feature. Facebook CEO Mark Zuckerberg was among the most vocal, calling Apple one of his company’s “biggest competitors.”

Last week, however, Zuckerberg changed his mind. He is reported to have commented that Apple’s tracking feature would “encourage more businesses to conduct more commerce on our platforms by making it harder for them to use their data in order to find the customers that would want to use their products outside of our platforms.”

In other words, Zuckerberg is betting that a Facebook user will also shop and buy on Facebook and no other app is going to know anything about either the user or the transaction. Zuckerberg says that’s good for Facebook. Is that true, or is Zuckerberg putting lipstick on a pig? We’ll find out soon enough.

According to a Wall Street Journal report, Google plans to increase its use of a “tool that infers whether an ad interaction led to online spending or subscription without identifying individual users.” That could mean that Google can no longer sell ads claiming to know everything about a user, including shoe size, and charge a premium price for the ad.

Research firm GlobalData issued a report Thursday on the number of acquisitions of artificial intelligence (AI) companies by four tech giants: Apple, Microsoft, Alphabet and Facebook. Between 2016 and 2020, Apple acquired 25 companies, including five last year alone. Ireland-based consultancy Accenture was the only non-U.S. and non-tech firm to appear in the top five.

Nicklas Nilsson, GlobalData’s senior analyst on the thematic research team, commented, “The US is the leader in AI, and the dominance of US tech giants in the list of top acquirers also indicate that these companies have some defined AI objectives.” Nilsson thinks that Apple “has gone on a shopping spree” in an effort “to catch up with Google (Google Assistant) and Amazon (Alexa)” voice recognition offerings.

Finally, TechRadar reports that Apple’s M1 CPU beat every AMD CPU and all but one Intel CPU on a benchmark suite from Passmark. Apple has used the new M1 chip in some MacBook models and in the Mac mini. The following chart from Passmark shows the single-thread performance of 12 CPUs on the company’s CPU benchmark test. The M1 trails only the Intel Core i9-11900K. 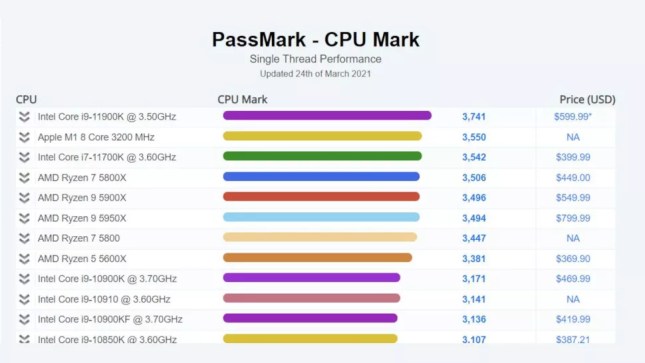 That’s not all, according to TechRadar. The top-performing Intel i9 chip costs about $539. A Mac mini with 8 GB of memory and 256 GB of storage lists for $699 and is available for less at some stores. That’s a lot of bang for the bucks. The downside for the M1 is that it lacks “real gaming capabilities” and other features.

DigitalOcean May Be a 'Rule of 50' Company Says Analyst