What's Up With Apple: Dealing With China, App Store Sales Booming, and More

Apple Inc. (NASDAQ: AAPL) does a lot of business in China. Not only does the company manufacture virtually all its iPhones there, but the iPhone is also the best-selling smartphone in China.

That success has come at a price. According to a report from The Information, Apple CEO Tim Cook personally lobbied Chinese officials and “secretly” signed an agreement “promising Apple would do its part to develop China’s economy and technological prowess through investments, business deals and worker training.” The Information estimates that the dollar value of the agreement was more than $275 billion.

The five-year agreement was signed in 2016 “to quash a sudden burst of regulatory actions against Apple’s business,” according to internal Apple documents reviewed by The Information. The agreement essentially gave Apple a safe position in the smartphone market and a secure manufacturing base. AppleInsider cites political economist Victor Shih who commented, “Apple likely wanted to avoid the optics of groveling to the Chinese government.”

Apple agreed strictly to abide by Chinese law, an agreement that saw the company move all its customer data that had been stored in iCloud to a Chinese-owned data center. Apple reached a similar deal with Russia earlier this year.

Researchers at Sensor Tower released data on Tuesday indicating that global consumer spending on app stores (Apple’s App Store and Google Play) will rise to approximately $133 billion in 2021, up nearly 20% compared to 2020’s total of $111 billion. The year-over-year increase was nearly as large as the 21% growth recorded between 2019 and 2020.

The app generating the most revenue overall was TikTok, generating $2 billion in sales for the first 11 months of the year and an estimated full-year total of $2.3 billion. Here’s Sensor Tower’s list of the top apps by overall revenue, App Store revenue and Google Play revenue. 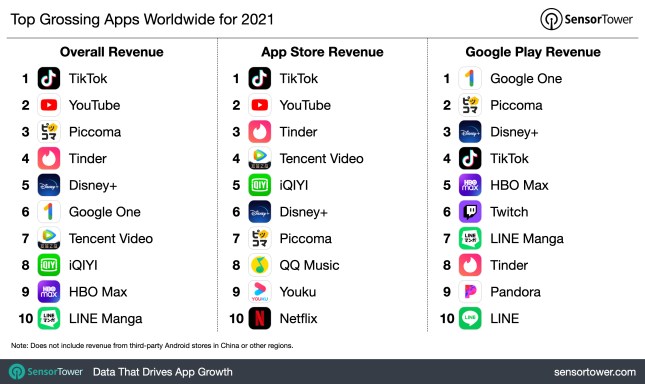 Fired Apple employee Janneke Parrish has filed a complaint with the National Labor Relations Board against Apple’s alleged “surveillance of employees’ protected speech activities.” Parrish had earlier filed a complaint related to her October firing.