Late Friday, Apple Inc. (NASDAQ: AAPL) posted a memo to employees on the company’s internal website, giving employees the right to talk about their salaries and other issues.

NBC News obtained the memo and quoted this bit:

[Apple’s] policies do not restrict employees from speaking freely about their wages, hours, or working conditions. We encourage any employee with concerns to raise them in the way they feel most comfortable, internally or externally, including through their manager, any Apple manager, People Support, People Business Partner, or Business Conduct.

Apple did not respond to a request for comment from NBC.

Apple employees have filed eight unfair labor practices charges with the National Labor Relations Board (NLRB) against the company. One of these was withdrawn recently when former software engineer Cher Scarlett settled her dispute with Apple and voluntarily left the company.

Veena Dubal, a professor at the University of California Hastings College of Law, told NBC, “This is a win for workers because it shows that Apple knows they would have lost had this been adjudicated. But it also underscores how little the law deters unfair labor practices, and how little workers can get when their rights to organize are violated.”

App developer and Apple watcher and critic Kosta Eleftheriou claims that Apple has raised the user ratings on the Apple Podcast App from a miserable 1.8 (out of 5 possible) stars to a much more Apple-like 4.6 by fooling users. On his Twitter account (@keleftheriou), Eleftheriou writes:

I’m guessing Apple somehow implemented a review request right after finishing a podcast, thus leading a LOT of people to believe they are rating the podcast itself rather than the app.

Ratings manipulation at its finest, by the gatekeepers themselves.

According to Elefteriou, Apple did nothing to fix any problems with its Apple Podcasts app; the higher scores were the result of manipulating users. In another tweet, Eleftheriou included this chart from @appfigures: 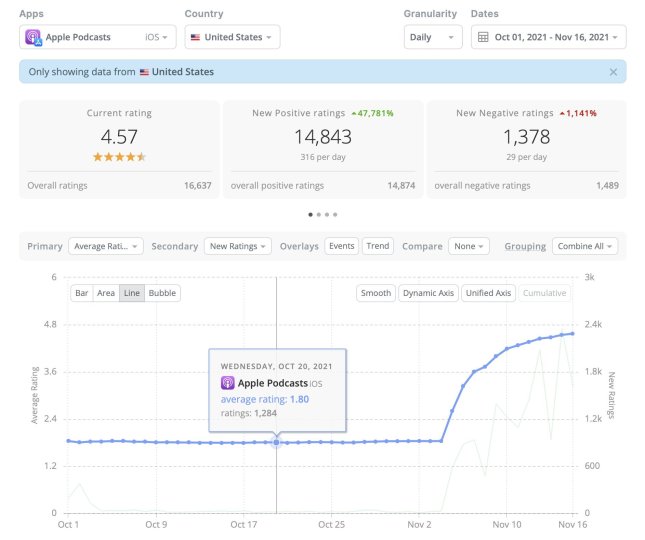 With the “official” start of the holiday shopping season just a few days away, retailers from Amazon to iPhone casemaker Nomad are revving up Black Friday deals on electronics products from Apple, Google and just about any manufacturer you can name. 9to5Mac has a list to get you started.