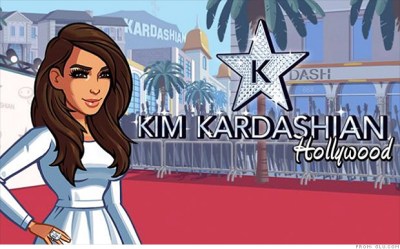 Source: Glu Mobile Inc.
Since its late June launch by Glu Mobile Inc. (NASDAQ: GLUU), mobile game Kim Kardashian: Hollywood has been estimated to be raking in about $700,000 a day, on its way to generating gross sales of some $200 million in its first year. That’s a lot of shoes for a game that is free to play and that makes money from its in-app offers, which cost as much as $39.99.

While Kim Kardashian: Hollywood might be the most visible manifestation, the fact is that women spend more time and more money on mobile games and are more loyal to those games than are men. No, teenage boys do not rule in mobile gaming, according to the latest data from Flurry, an online research firm recently acquired by Yahoo! Inc. (NASDAQ: YHOO). The firm sampled successful games that reach a total of 1.1 million mobile devices.

Women make 31% more in-app purchases than men and spend 35% more time than men in gaming apps. The Flurry researchers noted, “[T]he fact that females also outspend males in in-App Purchases came as a surprise to us.” The folks at Glu, and maybe even Kim Kardashian herself, were also surprised (and very pleasantly surprised you might think).

Not only do women spend more time in the games and more money on in-app purchases, they are also more loyal than men. That may be a surprise to no one, but female loyalty is 42% higher than Flurry expected, based on an average index score. And that retention is not all based on management/simulation games like Kardashian’s.

Women spend more time per week than men in nine of 19 categories of games. Men spend more time in six categories, and four are about even. All told, 32% of time spent on a mobile device is spent playing games. And now that we know that more women are playing games than men, the advertising spend should rise too because women are a more attractive target for advertisers as well.

As for Kardashian, here’s what Flurry concludes:

On the surface, it might appear that Ms. Kardashian has started a new trend and has disrupted the mobile gaming segment by attracting women’s time and credit cards. But our data suggests that trend started before Kim K. came to mobile and shows no sign of stopping.

Kim Kardashian may not be an original, and she may not even been one of a kind. But she knows a good thing when she sees one.

Microsoft's $10 Billion Investment in OpenAI: How it Could Impact the AI...