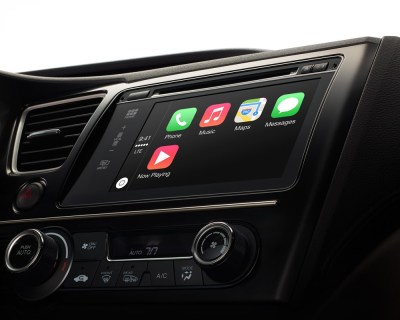 Source: courtesy of Apple Inc.
When Apple Inc. (NASDAQ: AAPL) announced its in-car operating system, CarPlay, in March at the Geneva Motor Show, the company also announced partners like Ferrari, Mercedes-Benz and Volvo. What Apple did not announce was when drivers could get their hands on a CarPlay-equipped car.

Apple still claims that the product will roll out this year. Maybe, but Mercedes, Volvo and Honda Motor Co. Ltd. (NYSE: HMC) have already announced delays until next year. Only Hyundai still plans a launch date sometime this year.

Google Inc. (NASDAQ: GOOG) has announced a similar system, Android Auto, and between the two companies some two dozen carmakers have committed to the in-vehicle infotainment (IVI) systems, according to Computerworld. There are other entrants as well: the Genivi Alliance, which includes BMW, General Motors Co. (NYSE: GM) and Intel Corp. (NASDAQ: INTC) among others; MirrorLink, an in-car operating-system developed at Nokia that works with a number of smartphone operating systems, except iOS; and the Open Automotive Alliance (OAA), another effort supported by Google. Tesla Motors Inc. (NASDAQ: TSLA) already sports an IVI system in its Model S sedan, but the systems under development include more integration and functions.

Now that mobile devices have taken over every room in the house, the next logical place for manufacturers to seek new venues is vehicles. Some 16 million new cars are sold in the United States every year. Apple and iOS have 42% of the U.S. smartphone market, and getting carmakers to offer CarPlay not just to that 42% but to all new car buyers could pump up the company’s revenues nicely.

But Google appears to be willing to put up a fight, and one advantage Google has is its identification with the driverless car. From a consumer’s standpoint, Google is already associated with automobiles and Apple is not. This is not a small advantage.