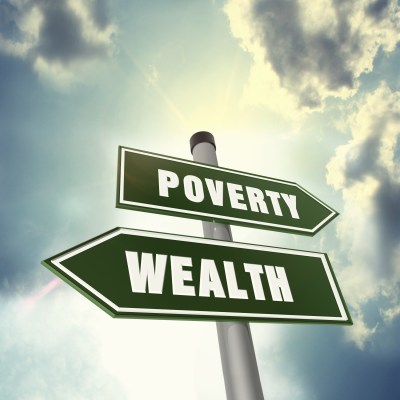 Source: Thinkstock
It is the time for yet another round of evaluating who makes what and how much they deserve. This round pertains to the contested Wall Street bonuses and pay.

While it may be ironic, that was on slightly less overall industry profitability due to the cost of legal settlements. It was also the first year total jobs gained since 2011.

Pretax profits for the broker/dealer operations of New York Stock Exchange (NYSE) member firms was $16 billion in 2014, down 4.5% from 2013 and on the heels of a 30% drop in the prior year. As additional drag on profits was tied to “weakness in fixed income and commodities trading, higher capital reserve requirements, and the continued cost of legal settlements stemming from the financial crisis.”

ALSO READ: 4 Banks That Should Be Raising Dividend Payouts Soon

The total gain to the securities industry employment in New York City was 1.4% to 167,800 workers. This is still 11% lower than in 2007 and lower than before the financial crisis. Some summary points seen were as follows:

As far as whether high pay and bonuses are good for society, it may depend on where you stand. Then again, it may depend on what industry you are in, when it comes to thinking about who ultimately supplies the demand for your business. If you are in the services sector in New York or anywhere around it, chances are high that there is a codependence, whether it is appreciated or not. DiNapoli’s report said:

A resumption of job growth in the high-paying securities industry would benefit the city’s economy given the industry’s high multiplier effect. The Comptroller estimates that each new job in this high-paying industry results in the creation of two additional jobs in other industries in the city, and an additional job in the suburbs… securities-related activities accounted for 6.7 percent of all city tax revenue in city fiscal year 2014 and 19 percent of State tax collections in state Fiscal Year 2013-14.

ALSO READ: States Where the Rich Are Getting Richer

Below is a table showing the 29 year history of Wall Street bonus dollars and trends. This shows that the pool of bonuses was the third highest on record in both total bonuses and average bonuses. 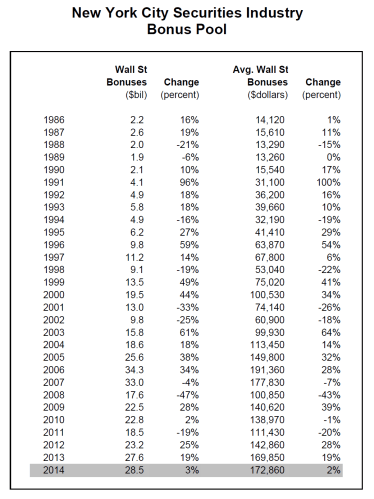