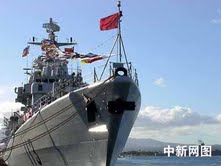 The Baltic Dry Index, which tracks global shipping rates, has fallen for 24 consecutive days, its longest losing streak since August 2005. The BDI closed at 2,406 yesterday, its lowest point since last October.

The decline is mainly blamed on falling demand from China for commodities like coal and iron ore. As China tries to cool its economy, the country plans to cut its production of steel which has also been suffering from lower pricing.

A contributing factor to the falling shipping rates is the pace of growth in the supply of ships. One analyst estimates that the dry bulk shipping fleet will increase by 17% in 2010. Filling those ships with goods would not be a problem if the global economy were growing. Because the economy is growing only tepidly, freight rates will not rise, and may even continue falling. The average daily earnings from a capesize ship in 2010 is expected to fall from $41,000 in 2009 to $35,000 this year, and the outlook for 2011 is for more declines.

Another threat to shippers is the continuing piracy off the horn of Africa. Earlier this week, Somali pirates hijacked a Singaporean-flagged ship with a crew of 19 Chinese nationals. The ship, which is owned by a Chinese company, was carrying a chemical used in making anti-freeze and was on its way to India.

The Chinese government has already contributed ships to an international fleet that is patrolling the waters off the Somalia to keep that vital shipping lane open. Yesterday, China sent another flotilla of warships to the Gulf of Aden to relieve the country’s ships that are already there.

The increase in piracy raises the cost of insurance for ships travelling offshore of east Africa, and contributes to the shippers’ shrinking profits. But the big problem is lack of demand for shipping coal and iron ore. And unless demand for finished goods grows, demand for commodities will stay low.

The issues facing the shipping business mirror the issues facing the global economy. Demand is dying as buyers lose confidence in the economy’s ability to grow out of its current doldrums. As a result, unused capacity increases and people lose their jobs. Then the cycle repeats.

Dryships thought it had found a way out of the vicious commodity cycle when it bought a couple of drilling platforms and ordered four more to be newly built. But the disaster in the Gulf of Mexico has put a serious crimp in the company’s ability to lease its rigs. The original two rigs are under contract and manned by experienced Norwegian crews. However the company can’t contract for any of the new build rigs and lacks financing for two of them.

Dryships had originally intended to spin-off its drilling operations by the end of this year, but no one thinks that will happen now. Genco paid more than $500 million last week for 16 new supramax vessels, which is either a very smart move (buying at or near the bottom) or a very dumb one (adding to over-capacity and under-utilization).

Diana Shipping recently purchased two new container ships for about $45.5 million each. One is fully contracted for a year at $16,000/day, and the other, which will be delivered before the end of July, is not yet contracted. Again, a smart move or a dumb one?

Based on the dive these three stocks have taken since late April, investors seem to believe that none of the moves is positive. Until prospects for global economic growth brighten and begin to move steadily upward, commodity shippers are going to remain under intense pressure.