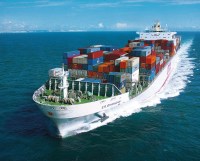 Seaborne shipping is experiencing a boom and bust period now as container shipping is having a difficult time meeting demand while dry bulk shipping continues its free-fall. The Baltic Dry Index, a measure of dry bulk shipping rates, fell for the 30th straight day yesterday, settling at 2,018, down more than 50% from its peak for the year in late May.

Containerships are facing nearly the opposite problem — a jump in demand that is absorbing all but about 2.5% of available capacity even as new containerships are launched. From a peak of more than 240 ships available in March 2009, only 44 carrier-operated ships are now available. That’s good news for container shippers like A.P. Moeller Maersk (OTC: AMKBF), Danaos Corp. (NYSE:DAC), and Seaspan Corp. (NYSE:SSW). Dry bulk shippers Dryships Inc. (NASDAQ:DRYS), Genco Shipping & Trading Ltd. (NYSE:GNK), and Diana Shipping Inc. (NYSE:DSX) are stumbling.

Danish shipper Maersk, the world’s largest container shipper, today raised its 2010 earnings forecast, predicting that it would earn more than the $3.5 billion in profit it saw in 2008. In 2009, the company lost $1.31 billion. Maersk includes an accounting gain from a share sale in China, but excludes a $1.2 billion gain from sale of its Netto food stores to the UK division of retail giant Wal-Mart Stores Inc. (NYSE:WMT). Once the Netto sale is approved by UK regulators, it too will add to Maersk’s bottom line for 2010.

Where day rates for dry bulk vessels have fallen steadily, demand for container vessels is rebounding strongly from 2009 lows, both in volume and in rates. German container shipper TUI AG recently raised its outlook for 2010, and Taiwan’s Evergreen Group has ordered 10 new container ships.

Container ships carry mostly finished goods in those 20-foot boxes we’ve all grown so used to seeing. Dry bulk carriers haul mostly raw commodities like iron ore, coal, and petroleum. A slow-down in dry bulk shipping, reflected in the BDI, points to a slow down in base-level manufacturing of such things as steel. If steel manufacturing is falling (and it is), then demand for iron ore and coal will also fall as steel makers use up inventory and slow production.

On the other end of the manufacturing chain, products that use steel lag behind commodity pricing simply because it takes time to make the stuff. Container shippers are thriving now on orders to manufacturers that were made months ago, when the overall outlook for the global economy were much rosier than they are now.

If global GDP growth projections begin to soften, as they probably should, demand for goods will also weaken and container shippers may find themselves in the same position as the commodity shippers.

Container shippers and dry bulk shippers are trading about flat today, except for Genco, down about -2.5%, which has announced that it is selling 3 of 16 dry bulk vessels that it just bought and hasn’t even taken delivery of yet.