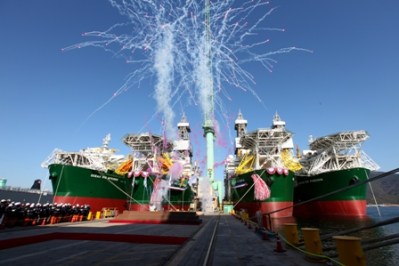 In October 2007, shares of bulk carrier DryShips Inc. (NASDAQ: DRYS) traded as high as $124/share. The share price today is less than $4/share, but that is not stopping the company from making an acquisition. And one may be forgiven for wondering what on earth DryShips can be thinking of.

The company will acquire Ocean Freight, Inc. (NASDAQ: OCNFD) for a total consideration of $19.85/share, more than double Ocean Freight’s closing price of $9.47 yesterday. The deal includes $11.25 in cash and 0.52326 shares of Ocean Rig UDW Inc., a Norwegian company that trades over the counter and which closed yesterday at $16.44 and is 78% owned by DryShips. As part of the deal, Ocean Rig shares will be listed on the Nasdaq GS when the deal closes, now expected to happen in the fourth quarter of this year.

Shipping companies are currently suffering from a rapid expansion of their fleets before the financial crisis that has left them with an oversupply of carriers. Daily rates are quite low, although the Baltic Dry Index has risen recently from a nadir of about 1,100 to around 1,300. In May of 2008, the BDI rose to nearly 12,000.

The purchase seems a bit odd, to say the least. DryShips has been sinking time and money into building an ultra-deepwater drilling fleet at Ocean Rig. Ocean Freight owns six dry bulk carriers, four Capesize and two Panamax, and has contracted to buy five newbuild Very Large Ore Carriers for delivery in 2012 and 2013.

DryShips isn’t the only shipper that is suffering. Shares in Eagle Bulk Shipping, Inc. (NASDAQ: EGLE) are down nearly -50% year to date, as are shares in Excel Maritime Carriers, Ltd. (NYSE: EXM). Shares in Genco Shipping and Trading Ltd. (NYSE: GNK) are off more than -50%.

None of these shippers has a price/book ratio above 0.5, and some are as low as 0.13. While numbers like this might often indicate a value play, in this case it very likely indicates a value trap. Shipping companies may turn around, but not this year and very probably not next year or the year after that either.

DryShips clearly saw an opportunity to buy while there was blood on the ground. That some of the blood was its own didn’t stop them.