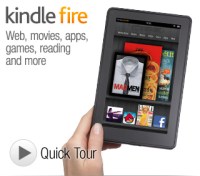 Jeff Bezos, CEO of Amazon.com Inc. (NASDAQ: AMZN), said this morning that the company is sold out of its Kindle Fire tablets and that the device has captured 22% of the U.S. tablet market. The company has scheduled an event for September 6 at which it is expected to announce a new version of the Kindle Fire tablet.

If Amazon’s count is accurate, the company has carved out a larger piece of the tablet market that is still dominated heavily by Apple Inc. (NASDAQ: AAPL) and its iPad. A report from research firm Frank N. Magid Associates earlier this month put the iPad’s share of the U.S. market at 50%, down sharply from previous highs of 74%. The Kindle Fire and the Nexus tablet from Google Inc. (NASDAQ: GOOG) are credited with taking share from Apple with their lower-cost, smaller tablets.

The Kindle Fire’s market penetration could be a matter of some dispute. IDC reported in May that the iPad’s share had grown from 54.7% in the fourth quarter of 2011 to 68% in the first quarter of this year. However, iPad volumes fell from 15.4 million units to 11.8 million units, mostly due to seasonal sales variation.

But it is not impossible that Kindle Fire sales have grown to 22% of the market, especially if consumers like the product’s size and price. Even if Apple does claim nearly 70% of the U.S. market, the Kindle Fire could still nab that large a share. And if the Magid research is accurate, a drop in Apple’s share to 50% lends even more credence to Amazon’s claims.