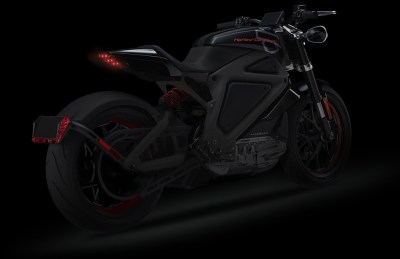 Source: Harley-Davidson Inc.
In what amounts to its first step toward an electric motorcycle, Harley-Davidson Inc. (NYSE: HOG) announced Thursday morning that a prototype bike called Project LiveWire will be available in select areas around the country next week. The bike will not be for sale, but rather offers consumers a chance to ride an electric Harley and provide the company with feedback on the bike.

Like the all-electric Model S sedan from Tesla Motors Inc. (NASDAQ: TSLA), electric bikes have a limited range and high price tag. Because the Harley bike is not for sale yet, we do not know what the price tag for that will be. But an electric street bike from Mission Motorcycles with a range of 140 miles and a top speed of 150 miles an hour sells for $59,000, but you can pay $75,000 if you’re so inclined. It is not unrealistic to think that a Harley electric would cost somewhere around that price.

If there is any single thing that defines a Harley, it is the bike’s rumbly, throaty sound, but the company is not going to try to replicate that on the electric version. Instead, the company’s chief marketing officer said, “Think fighter jet on an aircraft carrier. Project LiveWire’s unique sound was designed to differentiate it from internal combustion and other electric motorcycles on the market.”

The company will begin a tour of more than 30 cities along one of America’s most iconic highways, U.S. Route 66. Next year the company will broaden its U.S. tour and expand it to include Canada and Europe. Harley did not indicate when the electric bikes would be available for sale.