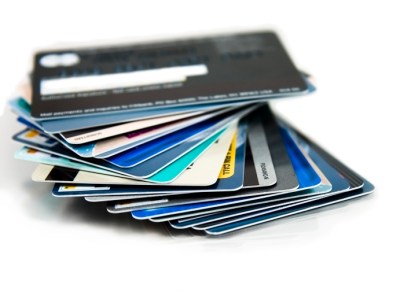 Source: Thinkstock
24/7 Wall St. has been looking for anomalies in the economy to find trends since the end of the Great Recession — trends both good and bad. You may have heard about new evidence of selective credit bubbles forming again. This largely seems to be an exaggeration by the media and aggressive reporting in many cases, but we still are seeing many issues that could start to worry those of us who fear what the next recession will look like.

One such reference is fresh data out of Equifax in the National Consumer Trends Credit Report. The credit monitoring service shows that credit card debt is increasing across the largest metro areas in America. The other, and more important observation, is that Equifax attributed the credit card surge at least in part to increased lending to subprime borrowers.

Subprime borrowers were certainly not the only cause of the Great Recession, but the institutions that catered to the subprime market generally took the biggest hit in the carnage that followed. Equifax reported that this provides the latest signs of a continued economic recovery. That is good news, right? Our question is on the other side of the coin: Should we all be worried about the possibility of another credit bubble forming, particularly in the subprime market?

Before we get to the crux of the matter, several other outside issues have brought us here to even asking about worries of a new credit bubble. A recent concern we saw was a rise in cash-out refinancings, what we saw before the recession as people used their home equity as a means of spending more and more. Also, even as early as late June came word that the rate of bad car loans was becoming a growing concern as well.

Equifax’s most recent National Consumer Trends Credit Report showed that consumers in each of the nation’s 25 largest metro areas had increased credit card debt, when comparing the second quarter of 2014 to the same period of 2013. Why this stands out so much is that this same report a year ago showed that seven of the top 25 metro areas actually had seen a decline in total credit card debt.

Consumers in areas hardest hit by the recession showed some of the biggest gains in credit card debt. The Las Vegas, Orlando and Miami metro areas — all ravaged by the collapse of the housing industry — were among the top five markets for increased credit card debt. Joining them were Houston and Dallas, which escaped the recession largely unscathed and have consistently experienced increases in credit card and total consumer debt. … The smallest gains were reported in St. Louis, Cleveland, Chicago and Detroit, where economic recovery has been slower.

READ ALSO: States With the Most Big Spenders

Equifax presents this rise in credit card debt as a positive. Our initial response is to agree that this is a positive on the surface. Still, those of us who remember the recession all too well may be unable to help but wonder if this is the beginning of the next wave of warning signs emerging all over again. Before getting too panicked on the matter, note that Equifax pointed out that economists generally believe increased debt levels signal growing consumer confidence.

The group with a credit score below 660 saw a 5.5% increase in credit card debt in the past year. The image below shows the table that accompanied the report. We have asked for data going back more years and will include that new data if it is made available. 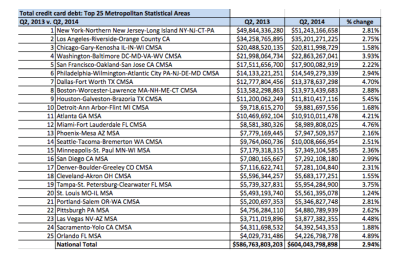