Warning for GM and Ford: Car Loans Becoming the Next Bubble in Banking 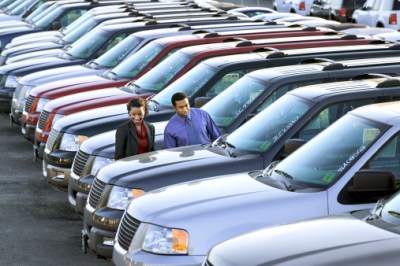 Source: Thinkstock
The Office of the Comptroller of Currency is not as well known to most Americans as other financial regulators in the United States. Still, its observations often become more widely followed in the months ahead if the trends they observe continue. Now the OCC’s latest outlook on risk perspectives is warning that lenders are facing more and more issues in the auto loan sector.

General Motors and Ford should pay close attention here, if they have not been. Warning: Auto Loans could be the next bubble in banking!

The OCC’s Semiannual Risk Perspective indicates that credit risk is building in supervised national banks and federal savings associations after a period of improving credit quality and problem loan clean-up. So, is another bubble forming already? It will depend upon whether the continued unemployment and jobs data acts to reverse the trends that have been building. We won’t know that for another few months, but now you can at least consider yourself warned.

The OCC’s report warns that the competitive pressures among lenders, as well as the need for revenue growth in an extended low interest rate environment are meeting compliance challenges which culminate into more complicated risk management in banks. The report said:

Competition is resulting in eased underwriting across a variety of products. Weakening standards are particularly evident in indirect auto and leveraged lending; however, some easing in underwriting and increased risk layering are also occurring in other types of commercial loans. While not widespread, some examiners note multiple policy and underwriting exceptions on individual credit decisions.

This erosion of underwriting standards is particularly evident in the indirect auto and leveraged lending. Increased wealth was put as a reason that has driven consumer confidence and drawn consumers back to auto showrooms and shopping malls. The reason is simple: auto loan growth, also in parts and dealers, is listed as an opportunity for double-digit growth.

Overall, retail credit outstanding totaled $12.96 trillion at the end of 2013. This is up $110 billion from the 2012 level, but it is still nearly $1 trillion below the peak in 2008. The increase was largely driven by (take a guess) — strong growth in auto lending (and student debt).

The OCC also showed that banks reported growth of 11.3 percent in the third quarter of 2013 and 12.9 percent in the fourth quarter of 2013. It also was quick to point out that the banks continue to hold a sizable market share of outstanding loans of $250 billion, or 31 percent of the total auto lending market.

A last warning is the developing signs of risk in auto lending trends that are starting to emerge. The OCC said:

Across the industry, auto lenders are pursuing growth by lengthening terms, increasing advance rates, and originating loans to borrowers with lower credit scores. Loan marketing has become increasingly monthly-payment driven, with loan terms and LTV advance rates easing to make financing more broadly available. The results have yet to show large-scale deterioration at the portfolio level, but signs of increasing risk are evident. Average LTV rates for both new and used vehicles are above 100 percent for all major lender categories, reflecting rising car prices and a greater bundling of add-on products such as extended warranties, credit life insurance, and aftermarket accessories into the financing.

In fact, the OCC even showed a table that put the average loan to value being above 100% in new cards and in used cars. If you have ever been upside on trade-ins for a car you will understand that this creates a phantom auto loan market that just keeps passing the buck on down the road. 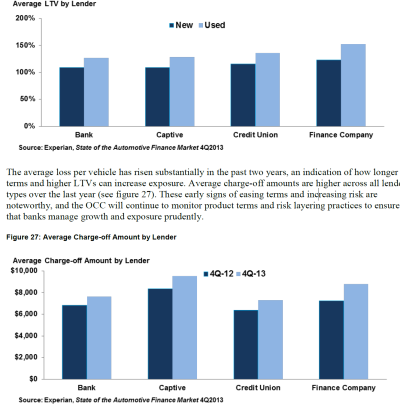 This Is the American Car With the Best Technology