In the middle of the Mojave Desert, with an annual precipitation rate of only 10 cm, Las Vegas must rely on distant sources for its fresh water. The city’s main source is Lake Mead, which supplies 85% of the water used in the Las Vegas Valley. Unfortunately, the lake is 59% empty and is approaching its first water shortage ever. In addition to Las Vegas, it would affect other areas of Nevada and Arizona.  Moreover, it could potentially stop the Hoover dam from producing electricity – as soon as 2013. This would affect many big California cities that receive hydro-electric power through the dam.

As Fort Worth continues to grow (its population is expected to hit 4.3 million by 2060), the amount of water demand has continued to exceed the amount of water available through local supply.  As a result, the city, which is in Tarrant County, must rely on storage water, making the system much more exposed to the worst effects of prolonged drought. To remedy this problem, the Tarrant Regional Water District is trying to bring in more water from Oklahoma’s Red River. Oklahoma, wishing to preserve  its water sources, limits interstate water sales. Fort Worth has countered with a lawsuit, which is pending in the U.S. Court of Appeals.

Much like the southeast in the early 2000’s, California has experienced intermittent droughts that have brought the area’s water supply to the brink of disaster. After several years of drought between 2005 and 2007, the Bay Area, which represents more that 3.7 million people, was forced to adopt aggressive water usage restrictions. Legal battles ensued between San Fransisco area legislators and those in the Sacramento delta who believed they deserved bay area water from major sources, like Lake Hetch Hetchy. According to the NRDC and CERES studies, the San Fransisco Bay area, including adjacent cities San Jose and Oakland, are “very likely” to experience a severe crisis as a result of water shortage within the next 50 years.

Bexar County, Texas, where San Antonio is located, possesses the highest rating given by the Natural Resources Defense Council with regards to water sustainability. This means that the area is at extremely high risk for water demand exceeding supply by 2050 if no major systematic changes are made.  As most surface water from lakes and rivers in Texas have already been claimed by varying districts across Texas, most counties are now looking at groundwater to meet future demand.  San Antonio has attempted to secure water from a number of Texas groundwater conservation districts. Due to legal obstacles,this has proven to be difficult.  Today, many experts, including members of the Texas Water Development Board, recommend undertaking a major project to ensure future sustainability, such as a desalination plant on the Gulf Coast. 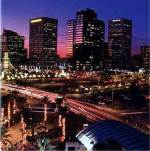 Like many of the other western cities on this list, Phoenix is extremely dependent on water imported from the Colorado River. This is because nearly half of the water the city’s residents use comes from this significant source.  As the Colorado River Basin enters the eleventh year of its drought, the city’s reliance on the river may soon become a serious problem.  If the drought continues, water deliveries to Arizona could potentially be cut back. To keep up a sufficient water supply, Phoenix is adopting an aggressive campaign to recycle water, replenish groundwater, and try to dissuade over-consumption. Time will tell if it these measures will be enough.

Throughout most of its history, the city of Houston primarily drew water from the Jasper Aquifer, located along the southeastern coast of Texas. Over the last 30 years, the city began to suffer from dramatic rises in sea level of nearly an inch a year. Geologists eventually realized that the cause was Houston’s withdrawal of fresh water from the aquifer located under the city. This discovery forced city officials to use nearby Lake Houston and Lake Conroe for municipal water instead of the aquifer. Since 2000, Houston has been the fifth-fastest-growing city in the country, and its presence in an area with high drought likelihood makes it an immediate risk for serious water shortages.

In the 1980’s, Los Angeles suffered a major crisis when the city was forced to stop using 40% of its drinking water due to industrial runoff contamination. Like Las Vegas, the city now relies on importing water from the Colorado river via hundreds of miles of aqueducts. The Colorado may only be a temporary solution, however, as the fastest growing city in the country continues to increase its demand at an unsustainable rate. In its utility risk rating, CERES gave the Los Angeles Department of Water & Power the highest likelihood of risk among the cities it assessed. That list included Atlanta and the Ft. Worth Area. On top of this, The Hoover Dam, which is the main source of electricity for LA and much of the greater southwest, is also producing at a lower rate than it has historically.  Some scientists suspect this drop-off will continue to a point where its electricity production is too small to sustain the dam economically.  Los Angeles, even if the dam doesn’t cease production in 2013, as some predict, it still faces serious water shortages.

Charles B. Stockdale, Michael B. Sauter, Douglas A. McIntyre