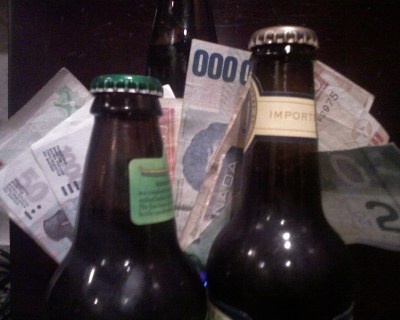 The discussion in the financial world has turned back to food inflation after several years of slow price growth.  It has been hard to not notice how food prices have risen at the supermarket level again, but for Joe Public perhaps one of the biggest insult is the ever-rising price of beer.  The cost of wheat, followed by barley and hops are all setting the stage that the cost of beer may be rising yet again.

As the debate continues over whether or not there is going to be higher inflation, for beer it boils down to the ingredients and the costs associated with them. Beer drinkers have become part-time economists.  Beer prices have risen recently whether inflation has returned or not and whether the economy is recovering or it isn’t.

The contributors to higher beer price for last year were in Russia and Europe. The fires in Russia destroyed much of the wheat and causing an export ban This combined with the poor crops in Europe which added to the cost pressures.  These problems were compounded by the issue of higher VATs and duties that have to be passed on by the pubs and retailers to the public.

An article last year from The Telegraph described how beer prices were likely to rise in 2010 and again in 2011 in the UK.  The fear was that the price of a pint might rise more than 40%.  The cost of beer appears to be about 10% higher in England already this year.

America is not immune, particularly at the smaller brewers and at the micro-brew level even though the hops and barley are almost entirely domestic.

Budweiser from Anheuser-Busch InBev (NYSE: BUD) actually uses rice as one of its primary ingredients, which should insulate Joe Six-pack from paying too much more in America. The problem is that AB InBev and Molson Coors Brewing (NYSE: TAP) raised prices last year and had planned on raising them further this year.  The economic recovery has reached the point that many feel higher prices will finally be able to be passed on to the retail level now.

The beer giants have already started a move into the fast-growing craft brewer business by acquiring several to protect market share. A consolidation of popular brands rarely leads to lower prices for the public.  So what happens when smaller brewers have to compete for materials?  It results in generally higher prices for the public.

The decision for some brewers will boil down to whether they will favor margins over market share.  Is it more important for Budweiser to lose a point of market share or to grow margin by 3 points?

BeerAdvocate outlined the 2009 trends a year ago which showed that small and independent craft brewers saw sales dollars increase just over 10% on volume increases of more than 7%.  The 2010 figures will be released shortly. Our bet is that the independents have experienced yet another gain in both revenue dollars and in case volumes.  Craft brewers do not compete on price as used to be the case.  Now it is about “premium product at premium prices” and a six-pack cost $7.99 or $8.99 is becoming the norm, if it doesn’t have Coors or Budweiser on the label. If it is an import or a specialty brew, that price might even be higher.

Can we think of something from Meredith Whitney of late?  Yep, municipal bankruptcy woes ahead.  We don’t subscribe to her exact logic, but many do.  What is a the by-product as those municipalities are at risk? Higher taxes.  Illinois just managed to raise state income taxes from roughly 3% to 5% on a rounded basis. Nothing prevents states, cities, and counties from passing another tax on six-packs of beer?  Taxes on beer might have a different effect than higher wheat, barley and hops prices. If so, it can act as a counter to the old belief that inflation is caused largely by higher taxes.  Don’t think that higher taxes get absorbed indefinitely by consumers.  The most recent data from the U.K. in a report from the Daily Mirror showed that beer prices have fallen significantly, in part due to much higher taxes.

The recent 2011 price trends seem to offer the U.S. at least some insulation, but that is not true for Europe and the United Kingdom.  Reuters noted that Anheuser-Busch InBev (NYSE: BUD) and SABMiller are probably better protected from commodity prices as they have large breweries in the southern hemisphere where a large portion the company’s barley comes from southern nations.  Argentina’s harvests have been less affected by adverse weather than those in Europe.  Euro-brewers like Heineken and Carlsberg get most of the supplies of barley locally in the European markets.

There is a problem if you go back in history just a few years and examines the period of the oil bubble.  There was pressure on prices of beer in 2008 due to high transportation costs, with only a brief lull in 2009 due to the recession.  Prices never really came down much, and then prices rose in 2010 and now are set to likely rise in 2011 as well.

The chart below will shows what has happened with the price of Wheat.  Prices rose in the summer of 2010 and haven’t come back down much other than a small pullback in the fall.  For 2011, let’s just hope we don’t have traders get into a situation where traders compare wheat to the parabolic 2010 move in cotton prices.  Unlikely, but possible.