Is this the start of wage inflation? The BLS recently reported that unit labor costs in the nonfarm business sector were up by 5.0% in the first quarter of 2015, with the breakdown being a gain of 3.1% in hourly compensation, and then including that 1.9% drop in total productivity. The BLS said that, as of the first quarter of 2015, unit labor costs rose by 1.1% over the past four quarters.

Consumers are borrowing more again, but retail sales data just are not at all supporting the notion that we are in a hot runaway economy. There also has been an argument that housing has to be strong for a good economy.

Housing data by and large remains mixed, despite the rising prices that have been seen for average houses in certain parts of the country. Also, the April housing starts gain of 20.2% was over the prior month at 1.13 million annualized, while the gain from a year ago was actually 9.2%. New permits were up by a lesser amount of 6.4% from a year earlier. The latest strength in housing starts was a post-recession high, but this is still barely half of the pre-recession peak — and it still only meets the lower points in housing starts of the 1980s and 1990s.

Freddie Mac said in its 2015 outlook that it was low mortgage rates that have helped to keep homebuyer affordability strong in the face of rising house prices. Housing remains extremely sensitive to interest rates. Each time mortgage rates rise even 0.5% or are feared to rise 1.0%, the media shows over and over how it affects housing affordability and how it can stress the ability for borrowers to get mortgages. It does not seem to matter that many of us remember having mortgage rates of 6% or 8% in years past, let alone in the double-digits in the 1980s.

Retail sales were flat in April, following a 1.1% gain in March. Even if the argument that first quarter GDP is undercounted, a weak reading in April retail sales got the second quarter off to a bad start. Even if you back out autos and gasoline, the retail sales figure from Census was up a mere 0.1%. Americans are spending more at non-store retailers, and their spending is up selectively at other sectors – but not furniture, electronics, department stores and grocery stores.

Again, consumer spending is said to account for about 70% of U.S. GDP. If retail sales remain weak and if consumers are more interested in saving their $750 per household annual pay raise from lower oil prices (or using it to pay down debt), it does not bode well for the argument that consumers will bail out the economy right now. Personal savings in the first quarter of 2015 was the highest since the fourth quarter of 2012. 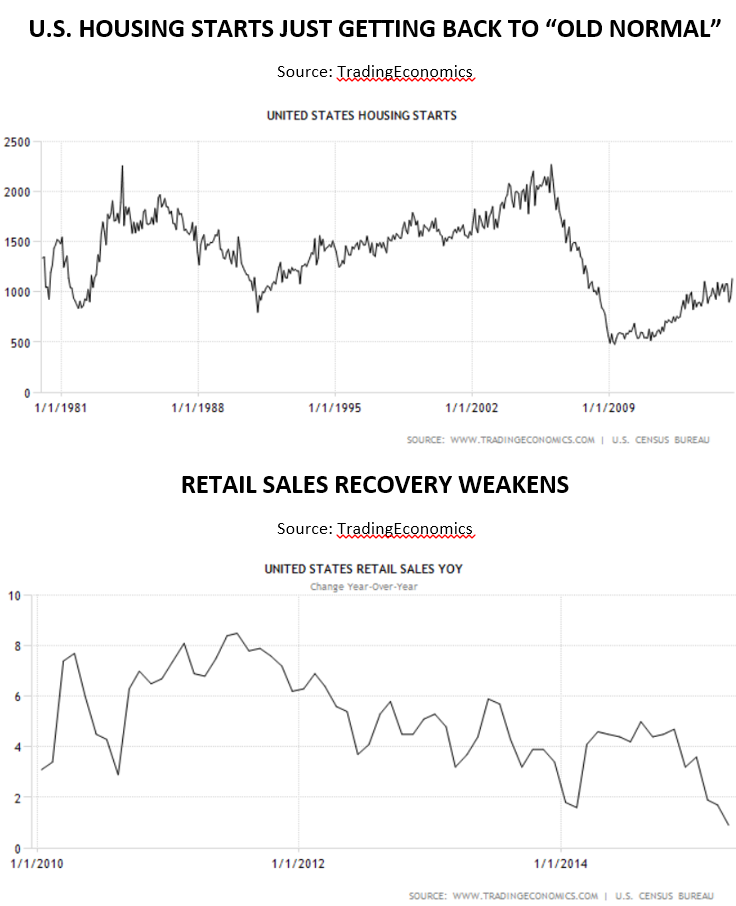