9. Industrial Production in the Toilet

Industrial production in April was down again with a reading of -0.3%, when economists were looking for a meager 0.1% gain. While March was revised to -0.3% from -0.6%, what stands out here is that April marked the fifth consecutive month in which industrial production has been in decline. The culprits are mining, which of course includes oil, as well as output from utilities and stagnant manufacturing.

What really hurts here is that the last real growth in industrial output was in November. Sure, you can blame the strong dollar creating weak exports. But international markets remain weak. Manufacturing output’s only recent gaining month was in March. Output from utilities was -1.3% in April, and mining was negative for the fourth month in a row at -0.8%. A lot can explain this, but at the end of the day enough excuses and exceptional situations just make for a weak economy. 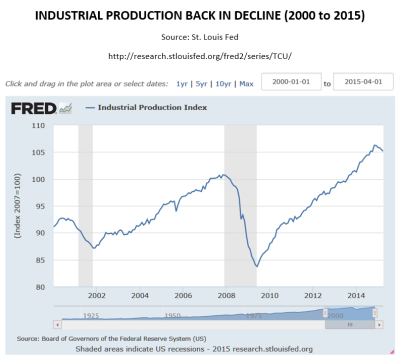 10. The World Is Awash in Unused Capacity

When politicians and economic pundits point out over and over that companies just will not hire or will not build new plants and factories to build for the future, there is another side to this argument, and it is around capacity utilization. Some of the argument can be tied to ongoing demand issues. But when companies have unused capacity, which they really do, what is their impetus to go make big hires and big capital spending projects? The world is awash in excess and unused capacity.

ALSO READ: States Where the Most (and Least) People Work for the Government

With lower industrial production, capacity fell again in April with a reading of 78.2%, versus 78.6% and well under that elusive benchmark of 80.0%. A long-term chart from FRED (below) shows that the closest utilization got to 80.0% post-recession was last November’s 79.8%. It has been in steady decline since.

Politicians and the public can criticize companies all they want about returning capital to shareholders, but until capacity exceeds 80% there is no real point in expecting big capital spending. Capacity was above 80% for most of the 2005 to 2008 period, and it was almost never below 80% from 1992 to just after 2000. 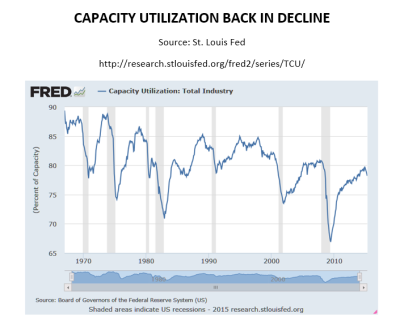