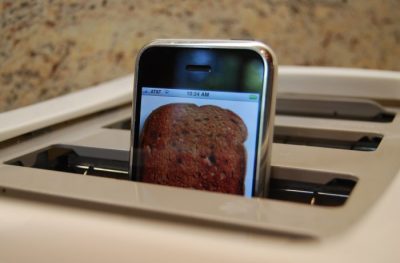 Global smartphone sales rose by nearly 100% in the third quarter of 2010 compared with the same period last year. That allowed Apple (NASDAQ: AAPL) and Research In Motion (NASDAQ: RIMM)  to pick up market share while large handset companies like Nokia, Samsung and LG, which do not have strong smartphone products, lost ground. The success of the iPhone and smartphones powered by Google’s Android operating systems have allowed these 3G and WiFi powered devices to leapfrog over products like the netbook as “PC replacements.” iPhone has a huge advantage over netbooks because of the App Store, which has more than 250,000 software applications that enables users to customize their devices to their individual needs.

The first major smartphone was the BlackBerry. It was introduced in 2002, but was built for business use. The iPhone, which was first available in 2007,  created a huge consumer demand for smartphones.

The smartphone has begun to replace a number of other consumer electronics devices.  As AT&T (NYSE: T) and Verizon Wireless build their cellular business, landline customers cancel traditional phone lines. They don’t need them anymore in a world with 3G wireless devices.

The power of the smartphone as the primary device used for news, entertainment, and communication will only increase. New 4G networks will allow subscribers to connect to the internet with handsets which will download data at speeds similar to those supplied by a home cable modem. Smartphone processors become more powerful each year and the devices get more storage capacity

This is 24/7 Wall St.’s list of the devices that the smartphone has begun to replace, and in some cases, that process is so far  along that the older products have almost disappeared.

The following are the ten products which smartphones are killing.