Can Seth MacFarlane Duplicate 'Ted' Success With 'A Million Ways to Die in the West'? 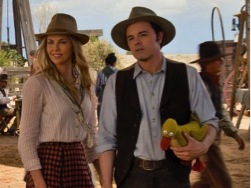 Source: Universal
A few years ago, when Seth MacFarlane made his big-screen directorial debut with a comedy about a teddy bear that came to life, he caught some flack from the industry. Many didn’t think a movie like that would play with audiences…but they were so very wrong.

Now MacFarlane is back and upping the ante with his on-screen acting debut, but the industry is again taking some swipes, which raises the question: Can he do it again?

MacFarlane’s empire
For those of you not familiar with MacFarlane, he’s to Fox what Shonda Rhimes is to ABC…a hot hand. MacFarlane is the Ryan Seacrest of animation and irreverent comedy. The multi-talented entertainer has command of an empire that includes Family Guy, American Dad, Ted and now A Million Ways to Die in the West, which started as a book he wrote and released earlier in the year, and hits theaters this weekend.

MacFarlane’s also released an album, hosted the Oscars and picked up a pair of Emmys. Simply put, the guy is a legitimate “A-list” celebrity and because of his style of humor, he is often not given the same respect as someone else with that type of resume. MacFarlane’s a very smart businessman and his thought process goes beyond sexual innuendos and bathroom humor, which he proved earlier this year with the re-launch of Carl Sagan’s Cosmos series. While the program didn’t set the ratings on fire, it’s been holding its own and has received positive reviews from the scientific community.

Terrific ‘Ted’
While many look at Family Guy as the reason for MacFarlane’s success, there’s more to it than that. Family Guy, which debuted on Fox in 1999, got MacFarlane into the game in a big way, but it was Ted, which hit theaters in 2012, that pushed him to that next level. The movie was produced for $50 million and to date has grossed nearly $550 million worldwide and another $128 million in home entertainment sales.

What many people may not realize is that while MacFarlane built his TV career at Twenty-First Century Fox’s (NASDAQ: FOXA) Fox channel, it’s Universal (a subsidiary of Comcast (NASDAQ: CMCSA)) that’s helping to create his film resume.  Back in 2010, before Ted had locked in star Mark Wahlberg and a few of its creative elements, the movie was better known as that talking teddy bear pic from the guy who did Family Guy, so you can understand why Fox studio chief Tom Rothman underbid for the rights (at least from a financial perspective). Universal meanwhile went all in, and you know the rest.

From a numbers angle you can understand Rothman’s stance, but from a creativity angle sometimes you have to roll the dice on your own homegrown talent. Not to rub salt in Fox’s wounds, but instead of Ted, the studio went for Ben Stiller’s flop The Watch and the equally disastrous Abraham Lincoln: Vampire Hunter.  The reasoning with Stiller was sound, though, because he and director Shawn Levy are an important part of Fox’s stable of talent (Night at the Museum, Dodgeball), so that was more of a long-term-relationship move.

How many millions?
That brings us to today and A Million Ways to Die in the West, which opens this weekend. The comedy spoofs traditional Westerns but is not expected to reach the $54 million in opening-weekend tickets that Ted did when it opened at the end of June 2012. A few factors tie into that projection…namely West’s competition. While the aimed-at-males Ted opened against the aimed-at-females Channing Tatum film Magic Mike, West mightface a bigger challenge for its core audience as it is going against the first weekend of Disney’s (NYSE: DIS) Maleficent (starring Angelina Jolie) and the second weekend of Fox’s X-Men sequel.

West is estimated to hit around $25 million to $30 million in its opening weekend, which is about $30 million less than what industry watchers think Disney’s Maleficent will pull in en route to topping the weekend box office. However, with a modest $40 million budget, it won’t take West long to reach profitability.

Another factor is that West doesn’t have the same easily explainable plot that Ted did, which isn’t to say it’s complicated (because it’s not). It’s just not as pithy as an “R-rated teddy bear.” Let’s be honest. There’s something about a foul-mouthed, hard-living stuffed animal that raises your curiosity factor.

IMDB describes the R-rated West‘s plot thusly: “As a cowardly farmer begins to fall for the mysterious new woman in town, he must put his new-found courage to the test when her husband, a notorious gun-slinger, announces his arrival.” West is relying on clever posters and puns to hype its ensemble cast, which includes Charlize Theron, Giovanni Ribisi, Sarah Silverman, Amanda Seyfried, and Liam Neeson.

A weekend preview from Box Office Mojo predicted West would have a hard time attracting viewers beyond MacFarlane’s fan base. His move in front of the camera “may increase curiosity among McFarlane die-hards, [but] it’s likely to be a turn-off for viewers who associate him with his poorly received 2013 Oscar performance. It also makes this seems like a vanity project, which average moviegoers have a tendency to avoid,” wrote Ray Subers on Box Office Mojo.

Despite the lower projections and criticism, there’s always a chance West could surprise and outperform expectations, but the overall feeling is that the film will make money, but will take a little longer to do so without the lure of MacFarlane’s little stuffed friend. But have no fear, Ted will soon be making a return as the sequel is slated for 2015.

Your cable company is scared, but you can get rich
The cable industry at large is right on the edge. The smart money is betting on a collapse. Do you know how to profit? There’s $2.2 trillion out there to be had. Currently, cable grabs a big piece of it. That won’t last. And when cable falters, three companies are poised to benefit. Click here for their names. Hint: They’re not Netflix, Google, and Apple.