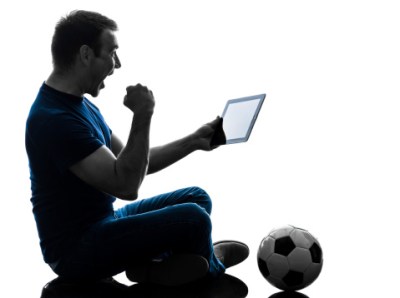 Source: Thinkstock
The latest “Know the Fan” report from Sporting News, Kantar Media and SportBusiness is full of interesting tidbits. Among them is the idea that online, sports fans prefer written content to video highlights. Of the more than 100 million people who browse the Internet to follow their favorite teams in the U.S., the report estimates that just 31% watch game highlights. Almost twice as many fans read about sports online.

The big question
So, do people naturally prefer reading about sports versus watching them online, or has there simply been a lack of high-quality video content available?

Given that TV — a medium more comparable to online video than written content — continues to be Americans’ favorite way to consume sports, I’m betting it’s a lack of high-quality video online that’s been weighing heaviest. The report estimates a whopping 96% of fans watch sports on television. Perhaps the better question is: Will this imbalance — between written content and video online — ever correct itself?

Digging into the data
The data suggest it could. According to “Know the Fan,” 2014’s crop of sports fans watches nearly every type of online video more often than last year.

When compared to written content, it’s clear which side is winning the growth battle. Aside from live text commentary, readership of written content online is either stagnant or in decline, according to the “Know the Fan” report. Seventeen percent of online fans read blogs and forums in 2014, compared to 20% last year. The drop-off in textual sports news is even larger. In fact, the only type of writing in higher demand is live content.

The most obvious example of this is live blogging, a service provided by everyone from Disney’s (NYSE: DIS) ESPN to Time Warner’s (NYSE: TWX) Bleacher Report. It’s possible that this shift is indicative of fans’ desire for dynamic content — an itch that’s arguably best scratched by video.

There’s new technology
These trends suggest online sports fans may eventually prefer video to written content, and new technology could hasten this process. At the moment, the biggest online sports video providers are ESPN, Yahoo! (NASDAQ: YHOO), and league-specific sites like MLB.com, NFL.com and NBA.com. But there are other players, like 120 Sports and NFL Now, set to join the market.

The former is a partnership between Time Warner, the MLB, NHL, NBA and NASCAR to give users unlimited access to quick, easy-to-consume 120-second-long highlights. Because of Time’s connection to Sports Illustrated, 120 Sports can make an immediate impact in the media world when it launches within the next year or so.

NFL Now, on the other hand, is the NFL’s much-hyped media aggregator that will give fans the ability to watch personalized highlights. And it’s likely others will follow. As I explained earlier this year, streaming video is typically more profitable than written content: “the average CPM, or cost per thousand impressions, is a little more than $24 for video ads [via eMarketer]. That’s more than twice the rate that a typical ‘premium’ display ad costs.”

The bottom line
The future is still unclear. But both data and emerging technology suggest there may be a day when sports fans prefer streaming video to text when they browse online. Given this possibility, media outlets must be willing to swim with the current and not against it.

An investing strategy that’s equally as revolutionary
Video platforms like 120 Sports and NFL Now may change the future of sports information consumption, and in a mere five minutes, I can show you an investing strategy that’s just as revolutionary. Every year, The Motley Fool’s chief investment officer handpicks one stock with outstanding potential, and last year his selection skyrocketed 134%. And previous top picks have gained upwards of 908%, 1,252% and 1,303% over the subsequent years! Believe me, you don’t want to miss what could be his biggest winner yet. Just click here to download your free copy of “The Motley Fool’s Top Stock for 2014” today.