The Ten States Where Walmart Is Everywhere 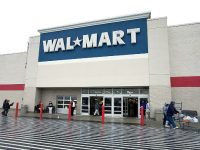 Walmart, the world’s largest retailer and the largest company in America based on sales and employees, has tried to argue since the beginning of the recession that it can revive its moribund sales growth in the United States. The odds that it can accomplish this are extraordinarily low. In the quarter which ended on April 29, same-store sales in the US fell 1.1 percent and revenue was up only 0.6 percent to $62.7 billion. The company’s growth is constrained by the fact that six of every ten dollars of Walmart’s sales come from the U.S.  Slow growth there has been a source of  concern. Bill Simon replaced Eduardo Castro-Wright as head of U.S. operations in June 2010.    Simon said his main focus would be on increasing store traffic and same-store sales while keeping prices low.  That’s been easier said than done as economic growth slowed and gas prices soared.

24/7 Wall St. examined Walmart’s store locations and distribution centers by state, along with store location growth since 1962, and compared this data to each states’ median income and the percentage of state residents living below the poverty line. Walmart is still essentially a regional retailer with its locations concentrated in ten states, all but one of which is near its home state of Arkansas. The location of the company’s distribution centers are also clustered in these regions. The ten states are overwhelmingly poor, which makes sense considering that many observers note that the chain is the shopping destination of choice of those of modest means.  It is also the shopping destination for those who live in the poorest states–an important distinction which shows one of the many reasons why Walmart has had trouble with its expansion.

Walmart’s has about 3,804 stores in the US, not including its Sam’s Club franchise. The rate at which new locations have been added has practically ground to a halt over the past few years. In Walmart’s last fiscal year, which ended on January 31, net store openings were only 49. The year before, that figure was only 52. Even five years ago, Walmart’s net stores opened were only 154. We asked the company’s public relations department for the dates and locations of stores opened since 2006. The company said we could count them by hand using the company’s press relations site.

New York, New Jersey, and California are not just distinctive because of their sizes. Each of the three states has high median incomes compared to other states, and a relatively low percentage of people who live below the poverty line. As a side note, Costco has 116 stores in California compared to Walmart’s 179. Costco is a more upscale retailer, and that is highlighted by the location of its stores.

A detailed study of Walmart’s store growth from 1962 to 2006, authored by Thomas J. Holmes of the University of Minnesota, shows that nearly all of Walmart’s growth occurred in the ten core states prior to 1977. By 1980, it had begun to open a small number of stores in Illinois, Florida and Texas. Rapid expansion beyond its core ten states took hold by the mid-1980s.

But, even now the company’s US activity shows that it is largely trapped in the center of the US. Over the last six months, Walmart has opened and remodeled stores in Utah, Oklahoma, Missouri, Louisiana, South Carolina, Arizona, and Florida–all states where Walmart already has high market penetration.  Its only activity outside these areas have been a handful of new stores in New York, Massachusetts, and Ohio. In other words, Walmart is making almost no progress in the regions where it must grow to improve US sales..

There have been a substantial number of academic studies about the reasons for Walmart’s growth, the company’s marvelous distribution operations, its battles with unions and female workers, and its lack of a presence in most large American cities. There is not much need to add to those debates in which well-educated experts offer differing opinions about Walmart’s expansion and business practices. Most analysts who cover Walmart for Wall Street believe that the company has not been successful in cities because local communities fear that its appearance would destroy jobs and cause undercut small business. This is despite the fact that data to support that is not conclusive. There are a number of stores in Houston, Texas and Chicago, Illinois. There are none in New York City though Walmart is trying hard to gain a foothold there.

There is no way that Walmart can restart any substantial growth in the US without a sharp increase in its presence in the dozen most populated states which include California, New York, and New Jersey which have 65.5 million residents among them–21% of the people in the US.    Overseas growth alone won’t cut it with investors who have seen shares of the retailer underperform the S&P 500 Index this year, gaining 2.93% versus 6.75%.

Fortress Walmart, which is comprised of ten states, sits in the south central US. Even Walmart management may not know exactly what the company business model has not fared as well outside its home turf.  But if it wants to get back into Wall Street’s good graces, it better figure that mystery out sooner rather than later.