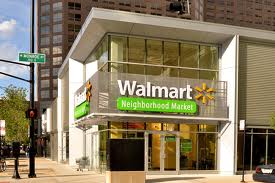 Source: Wal-Mart Stores Inc.
With the launch last week of a gas station/convenience store, Wal-Mart Stores Inc. (NYSE: WMT) now offers customers six different store formats to choose from, ranging from the Supercenters of up to 260,000 square feet to the 15,000 square-foot Walmart Express stores. The enormous big-box stores still dominate the landscape, but over the past several years the company has been looking at smaller formats, as a way to extend Walmart’s brand footprint, pick up sales it is losing to smaller stores, and gain entry to markets in which they have previously been shut out.

In its annual report filed on March 21 with the Securities and Exchange Commission, Walmart said that 56% of the company’s total sales in 2014 came from grocery sales. Walmart U.S. President Bill Simon told an investor conference in early March that the weekly consumer trip to a supermarket to stock-up for the coming week is a $585 billion business in the U.S., and Walmart gets a 25% share of that business.

The quick-trip to a convenience store for a quart or milk or a six-pack of your favorite beverage is a $415 billion business in the U.S., and Walmart gets just 10% of those sales. That’s a number the retailer would like to grow.

The backbone of the Walmart empire is the Supercenter. In its annual report, the company reported that it has 3,288 Supercenters in the U.S, an increase of 130 in the last year. The average size of a Supercenter is 179,000 square feet, and the stores offer both merchandise and groceries. Nearly all of these giant stores are open 24-hours a day.

The original big-box Walmart store is now called a Discount Store, and the company has been closing these stores or converting them to Supercenters for at least the last 5 years. In 2010, the company had 810 Discount Store; the number has shrunk to 508 in 2014. The average size is 105,000 square feet. The stores typically don’t offer groceries and are open 14 or 15 hours a day every day of the week.

Walmart lumps its Neighborhood Markets and Walmart Express stores under a single category. The company has been opening these stores at about the same rate as it is opening Supercenters. The company claimed 190 stores in this category in 2010 and 407 in 2014. The average size is 40,000 square feet, and these stores carry a smaller selection of groceries and merchandise. The 20 U.S. Walmart Express stores average about 15,000 square feet. Hours are the same as the Discount Stores.

The company’s Sam’s Club warehouse stores are membership operations, and the stores average about 134,000 square feet. The numbers are growing, but very modestly from 605 in 2010 to 632 this year. The stores are open for 11 or 12 hours a day with additional hours for business members.

The gas station/convenience store is the sixth format, and a company executive has said that Walmart has no plans to roll-out the format further. That may well be true now, but never say never.

Walmart is also testing a drive-through pick-up option in some of its Denver-area stores. Customers can place an order online and pick it up later the same day. The company is even considering drive-in pick-up centers that are not attached to its Supercenters.

Another format being tested is 2,500-square foot Walmart on Campus convenience stores located on or near college campuses.

Selling groceries is what made Walmart’s Supercenters both different and profitable. The lesson Walmart learned is that food sells better than anything else. If the company can sell food in small stores at the same price point as it sells food in its giant stores, it will have a price advantage over its competitors. The downside is that Walmart will probably need to open four or five of the small format stores for every Supercenter or Sam’s Club it opens just to keep the volume up and make the small format stores worth the trouble.