Among Walmart's Top Holiday Toys: A Smartwatch for $60 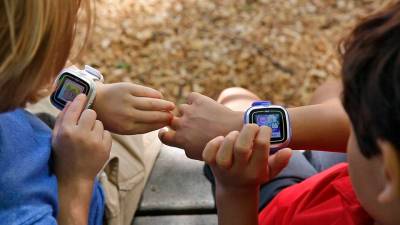 Based on the number of toys picked by the kids, the classics still rule, with seven of the top 20. Electronic gadgets followed with six of the top 20. Licensed toys and creativity toys placed three toys each on the list, and one scooter rounded out the top 20.

In the licensed toy category, Walt Disney Co. (NYSE: DIS) scores with a pull-toy tied to the company’s popular Doc McStuffins TV program and with a Snow Glow Elsa doll based on a character from the wildly popular “Frozen” movie.

Mattel Inc. (NASDAQ: MAT) puts both its Hot Wheels and Barbie brands on the list, and Hasbro Inc. (NASDAQ: HAS) puts a walking dog among the top toys. Leapfrog Enterprises Inc. (NYSE: LF) placed its Leap TV on the electronics list, and Hong Kong-based VTech Holdings put its Kidizoom Smartwatch among the top 20 as well.

This week’s introduction of the Apple Watch from Apple Inc. (NASDAQ: AAPL) offers a chance to compare the features of a $60 electronic gadget for kids with a $350 gadget for grown-ups. The Kidizoom Smartwatch takes photos and records video and includes a micro-USB cable, both to upload photos and video to a computer and to recharge the watch’s battery. The Kidizoom Smartwatch is also “splash proof” and includes a touch screen, four learning games and more than 50 watch face designs for kids to pick from.

ALSO READ: What the Apple Watch Was Supposed to Have, but Didn’t