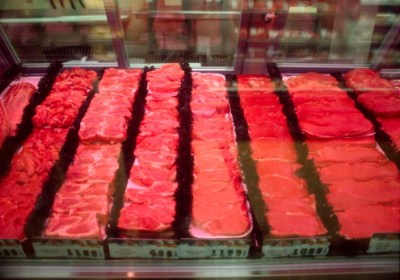 Source: Thinkstock
Food prices at the grocery store are up, following an increase in production costs and wholesale prices. In March, retail food prices rose 0.4% from the preceding month, matching February’s increase. These marked the largest monthly gains in food prices since September 2011, according to data from the Bureau of Labor Statistics (BLS).

Food prices are often volatile and are affected by a number of factors. While certain factors reflect human decision — such as the changing tastes of consumers and farmers’ planting choices — others are forces over which farmers have very little control. Issues such as weather conditions and diseases can cause severe supply shortages that cause the price of products to rise.

In recent years, drought in the western U.S. has driven up the prices of meat, dairy, fruit and vegetables. Parts of California, the Southwest, and the Great Plains have suffered from three consecutive years of drought, according to Brad Rippey, meteorologist for the U.S. Department of Agriculture (USDA). More than two-thirds of California is currently covered by extreme drought, according to the U.S. Drought Monitor.

Of course, drought directly impacts crops. “Agriculture uses about 80% of California’s water,” Rippey told 24/7 Wall St., and, because of cutbacks in water delivery, “a lot of fields may have to lay fallow.”

Drought has also driven up meat prices because it caused feed prices to spike in recent years, Rippey added. The higher feed prices increase the cost of raising cattle for slaughter and, in the end, the meat prices for consumers. Bacon prices have gained more than nearly any other food tracked by the BLS since the start of the decade, rising 35% to $4.13 per pound.

The price of the only food product that has risen more than beef is bacon, which soared 53% since January 2010. This is due in large part to the spread of Porcine Epidemic Diarrhea Virus (PEDv) in hogs. Although the disease has no effect on humans or food, it can be fatal for young pigs and is therefore expected to cut into hog production considerably. Ham and pork chop prices have also increased since 2010, up 32% and 24%, respectively.

Diseases are hardly limited to livestock. Citrus fruit, too, has suffered from a disease. Production of both oranges and grapefruits has dropped as citrus greening disease has damaged Florida crops — which account for the majority of grapefruits and oranges produced in the U.S. Trade publications, national media, and even the USDA have portrayed the disease as a threat to the survival of the citrus industry.

Demand is another key factor that drives food prices. According to Steve Freed, vice president of research at ADM Investor Services, the agricultural world pays attention to a number of trends that can drive prices. These include the state of major economies, such as the U.S. and China, as well as consumer tastes. “We’ll be watching any change in U.S. and world diet,” he added.

To identify the food prices that have risen the most, 24/7 Wall St. examined average retail price data published by the BLS Consumer Price Index (CPI) for the period January 2010 through March 2014. Similar kinds of products, including certain beef and pork products, were grouped together to avoid duplication. We also reviewed data on commodity futures from CME Group and the IntercontinentalExchange Group for a range of products. A number of reports produced by the USDA were also considered.

These are the 10 fastest rising food prices.