Countries With the Widest Gap Between Rich and Poor 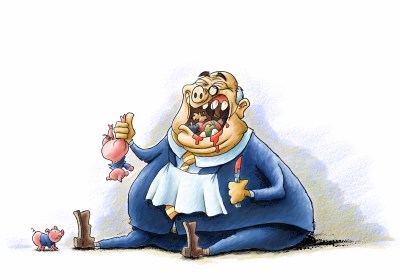 Source: Thinkstock
The United States of America — the land of opportunity — has the fourth most uneven income distribution in the developed world. Chile has the most unequal distribution of income, while Iceland tops the list as the most egalitarian.

The Gini index measures how much an economy deviates from perfect equality — where everyone has the same income. A score of zero indicates perfect equality, and a score of one indicates extreme inequality. Based on index figures for Organisation for Economic Co-operation and Development (OECD) countries, these are the least equitable countries in the developed world.

Gini index scores can be measured before, as well as after, taxes and transfer payments. According to Chad Stone, chief economist at the Center on Budget and Policy Priorities (CBPP), a Washington, D.C.-based think tank, the economy alone determines pre-tax and transfer payment inequality. “It’s the whole economy. It’s the fact that different people have different skills,” Stone said.

One measure of how fiscal policy can effect income inequality is the difference in Gini index scores before and after tax and transfer payments. By this measure, the U.S. ranks as the fourth-worst country in the OECD for reducing income inequality. Other countries that fare poorly include Chile and Israel, the OECD’s most and fifth-most unequal nations.

CBPP’s Huang told 24/7 Wall St. that “reduction [of ] inequality and increased income in the bottom and middle leads to things like higher education of the workforce,” which in turn improves an individual’s ability to improve his economic status.

However, the relationship between education and inequality is not always clear. While countries that have low income inequality have educated workforces, the opposite isn’t necessarily true. The U.S. and Israel, two of the most unequal countries, were among the largest spenders on education as a percent of GDP in 2011. “There’s something there that could happen over multi[ple] generations that can’t be seen in a single year snapshot,” Huang said.

Different sources offer different conclusions regarding the effects of inequality on economic growth. According to an International Monetary Fund (IMF) report, “Inequality continues to be a robust and powerful determinant both of the pace of medium-term growth and of the duration of growth spells.” Meanwhile, a Center for American Progress report found that inequality’s impact on growth was inconclusive.

Despite these differences, however, both reports argue that there were substantial reasons why the U.S should seek to meaningfully address inequality, including fairness and preserving opportunities for ordinary Americans to get ahead.

To determine the countries with the most uneven distribution of income, 24/7 Wall St. reviewed post-tax and transfer Gini index scores published by the OECD. We also consulted the CBPP’s report, “What Do OECD Data Really Show About U.S. Taxes and Reducing Inequality?”, which reviewed the same OECD data. We also considered data on GDP growth, education, job growth, gross fixed capital formation, as well as social and family spending, all from the OECD. Figures are from the most recently available year.

These are the countries with the widest gap between the rich and poor.