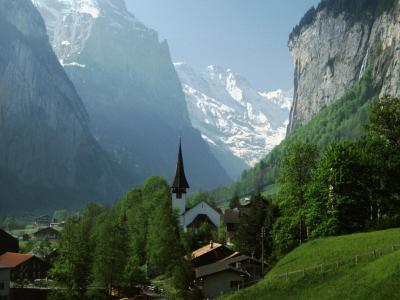 The residents of Switzerland are the most satisfied with their lives, according to the latest Better Life Index report, released this week by the Organization for Economic Co-operation and Development (OECD). Switzerland has moved up to the top spot, bumping Denmark to fifth. For the third year, the United States failed to make the top 10, while countries like Canada, Mexico and all the Scandinavian nations did.

Click here to see The Happiest Countries In The World

While each of the other 10 categories of quality of life measured in the study is related to life satisfaction, there are several that clearly play a much bigger role, Conal Smith, section head within the statistics directorate at the OECD, explained in an interview with 24/7 Wall St.

The first, and arguably the most important, is jobs. Of the 10 countries with the highest levels of reported life satisfaction, eight had among the 10 highest employment rate — that is, the percentage of the population that is employed. Of the 10 countries with the lowest reported levels of life satisfaction, six had unemployment rates in excess of 11% in 2012. This includes countries like Greece, Portugal and Italy.

“For life satisfaction, it is pretty clear that unemployment drives the relationship,” explained Smith. “Not having a job when you’re willing and able to work affects life satisfaction more than anything else.”

Not surprisingly, good health appears to affect life satisfaction. In seven of the 10 countries, there was a better-than-average proportion of residents reporting good health. This includes Canada, where 88% of respondents reported being in good or better health, compared to an OECD average of 69%. Life expectancy was also high in most these countries, with Switzerland reporting an average life expectancy of 82.8 years, the highest among the 36 countries measured. Of the 10 countries with the worst life satisfaction, the majority had below-average life expectancy.

Another factor many of the countries on this list have in common is governments that tend to provide ample benefits for residents. Five of these countries, including Sweden, Denmark and Austria, spend more than the United States as a percentage of gross domestic product (GDP) on their residents. Likely as a result, income equality is also very high in the majority of these countries.

Dropping three spots this year, the United States is tied for 14th in life satisfaction. This is in spite of the fact that the it had the highest disposable income of any country measured and a high rate of self-reported good health. Given how well the country does on most measures, it suggests that life satisfaction encompasses more than simply income or even health. Mexico, which had among the lowest scores for many indices, still reported among the highest life satisfaction.

Earlier this week, the OECD released “How’s Life?” — a further review of the quality of life data compiled for the Better Life Index. As part of its analysis, the OECD looked at other components affecting the quality of life, including disparities in quality of life and life satisfaction among women, what happened to these countries during the recession, and the treatment of their workforces.

Romina Boarini, head of the well-being and progress section at OECD, said one of the goals of the new report was to identify inequalities among different groups, including women. Boarini explained, “Where the gender disparities are the lowest, you actually observe that the overall well-being is the highest. There seems to be that correlation that where gender disparity is lower and a higher level of overall well-being.”

Another component of the new “How’s Life?” study was the long-term expectations of residents of these countries. The report measured how optimistic people were about their subjective quality of life in five years from 2012, and compared it to how optimistic they were in 2005. While most of the happiest countries in the world are slightly more pessimistic now than they were in 2005, they are generally much less pessimistic than most of the countries measured by the OECD. In Denmark and the Netherlands, residents are actually more optimistic about their quality of life than they were in 2005.

Based on figures published by the OECD as part of its annual Better Life Index, 24/7 Wall St. reviewed the 3o indices measured for each of the member nations and participating countries. The indices that make up the Better Life Index are comprised of 11 categories: housing, income, jobs, community, education, the environment, civic engagement, health, life satisfaction, safety and work-life balance. Figures used to calculate the index and its components are from different years, and the values for individual nations represent the most current data available. We relied on unemployment rates from the OECD’s most-recent Economic Outlook data release, as well as figures covering government outlays and the Gini coefficient, which measures income equality after taxes and transfer payments for each country. In the “How’s Life” report, new data included changes in poverty rates between 2007 and 2012, changes in total employment in the 2007-2009 and 2009-2012 periods. Includes also were the proportion of all tertiary degrees awarded to women in 2010 and the differences between men and women in overall life satisfaction for 2012. The OECD also included unemployment insurance gross replacement rates as of 2011.