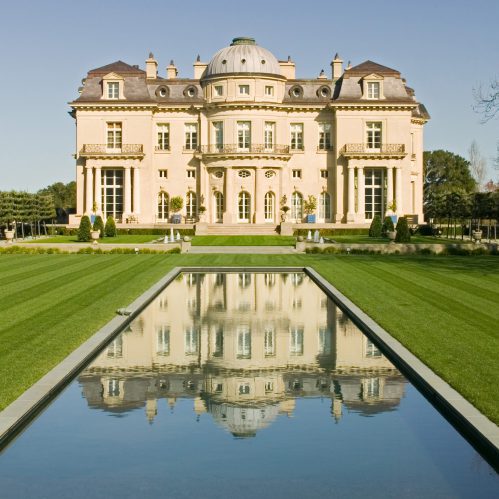 Source: Wikimedia Commons
Urban centers often have at their perimeters small towns with well-educated, wealthy residents. States without such large metropolitan areas tend to lag behind in income and education and as a result, tend to have less rich towns.

Incomes in even the nation’s richest towns vary considerably. Because wealthy areas tend to be concentrated around large urban centers, states with large cities tend to have many small wealthy towns. Meanwhile, states lacking these dense urban clusters not only tend to have fewer wealthy areas, but also the wealthy towns are comparatively less wealthy.

Click here to see the richest towns in every state.

In New York there are 35 towns where the median household income is more than double the national median income of $53,482. All 35 of those New York towns are within 75 miles of Manhattan. By contrast, the median household income in Maine’s richest town is less than the national median income. Maine’s largest city has a population of less than 67,000 residents — a fraction of the 1.6 million residents in New York City’s Manhattan borough alone.

To identify the richest town in each state, 24/7 Wall St. reviewed median household incomes in every town with a population of 25,000 or less in each state from the U.S. Census Bureau’s American Community Survey (ACS). Due to relatively small sample sizes for town-level data, all social and economic figures are based on five-year estimates for the period of 2010-2014. Still, data can be subject to sampling errors. We did not consider towns where the margin of error at 90% confidence is greater than 10% of the point estimate of both median household income and population. Towns were compared to both state and national figures. We considered the percentage of residents who have at least a bachelor’s degree, the towns’ poverty rates, and the workforce composition — all from the ACS. Because poverty rates can be skewed in areas with high shares of college students who frequently have very low incomes, college towns were also excluded. College towns are defined as towns where more than 40% of the population is enrolled in undergraduate or graduate school.

These are the richest towns in every state.