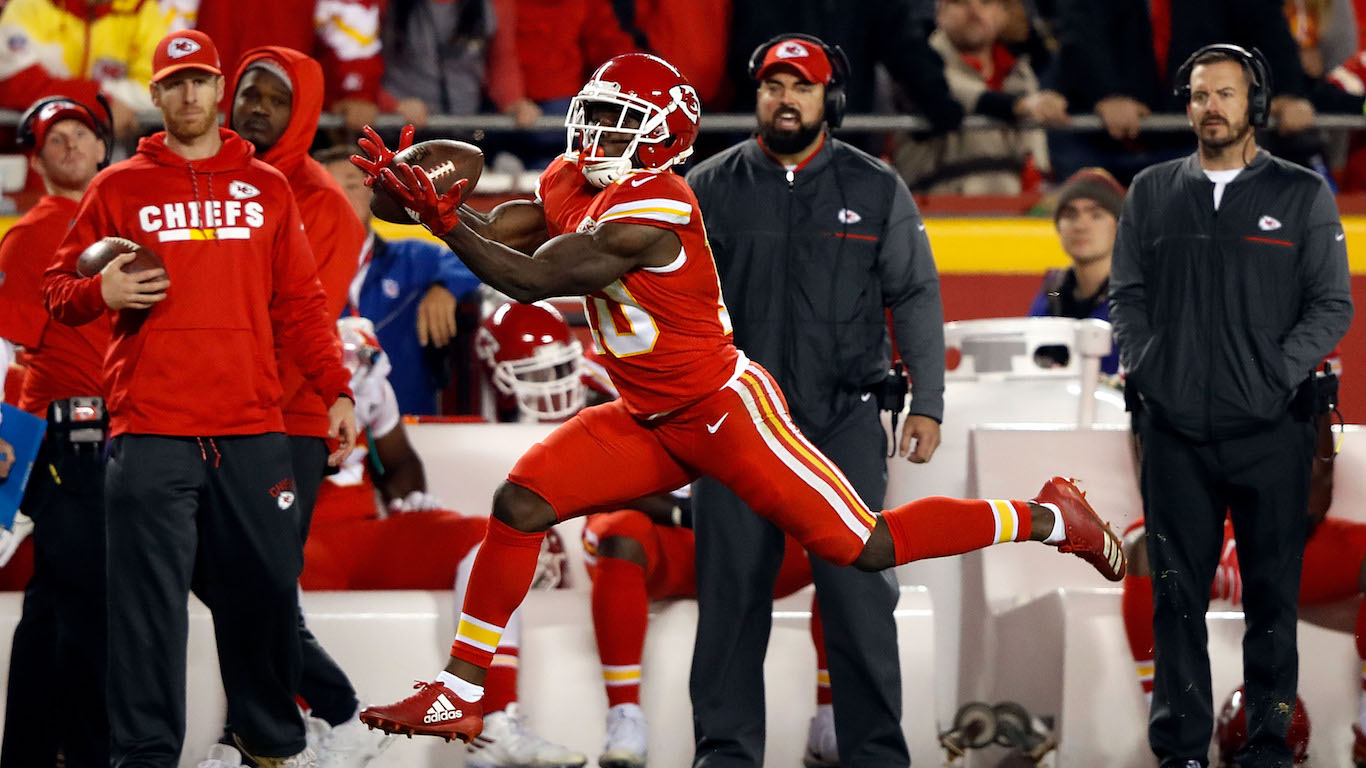 With a win over the Dolphins, the Chiefs (8-6) will earn a second consecutive AFC West crown. Back-to-back division titles would be a first in franchise history. Kansas City, which has had an up-and-down season, is a big favorite after two straight wins, including Sunday’s 30-13 victory over the Chargers. Rookie running back Kareem Hunt, who went through a small slump this season, had 31 touches for 206 yards and two touchdowns on Sunday. He’s second in the NFL with 1,201 rushing yards.

The Dolphins (6-8) are coming off a 24-16 loss to the Bills. Jay Cutler threw three interceptions and zero touchdowns in that game. The $10 million fill-in quarterback has so far thrown 18 touchdown passes and 14 interceptions. No playoff hopes for the Dolphins, who have won just two of seven road games. In fact, they’ve lost the last four road games. 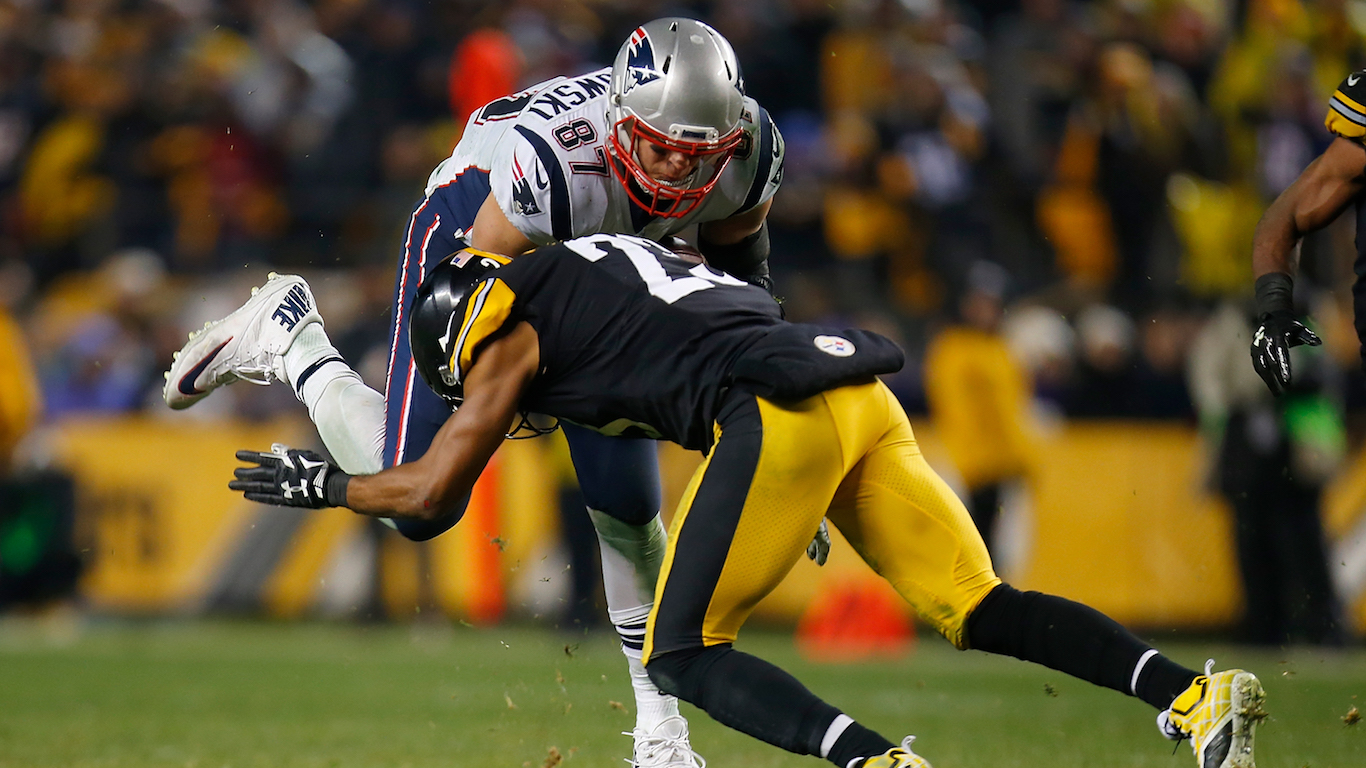 Coming off an epic 27-24 win at Pittsburgh that clinched the AFC East title, the Patriots (11-3) need to get refocused. Not much doubt they will do just that. They’re the favorite for myriad of factors, including the 23-3 win over Buffalo three weeks ago. If New England beats the Bills and the Jets in its final two games, the Patriots could have home-field advantage in the playoffs. Tom Brady and Rob Gronkowski led the comeback drive Sunday. It’s a duo that is tough to beat. The Patriots defense is ranked 29th in the NFL, allowing 377.4 yards per game. That could hurt them moving forward, but so far Brady has been able to make up the difference.

The Bills (8-6) still have a chance at snapping their 17-year playoff drought. The chance is pegged at 36% by FiveThirtyEight. They are still in play for a wild-card berth. An upset of the Patriots would certainly help. They’ve won two consecutive games, including Sunday’s 24-16 home victory over the Dolphins. They play at Miami in Week 17 to wrap up the season. 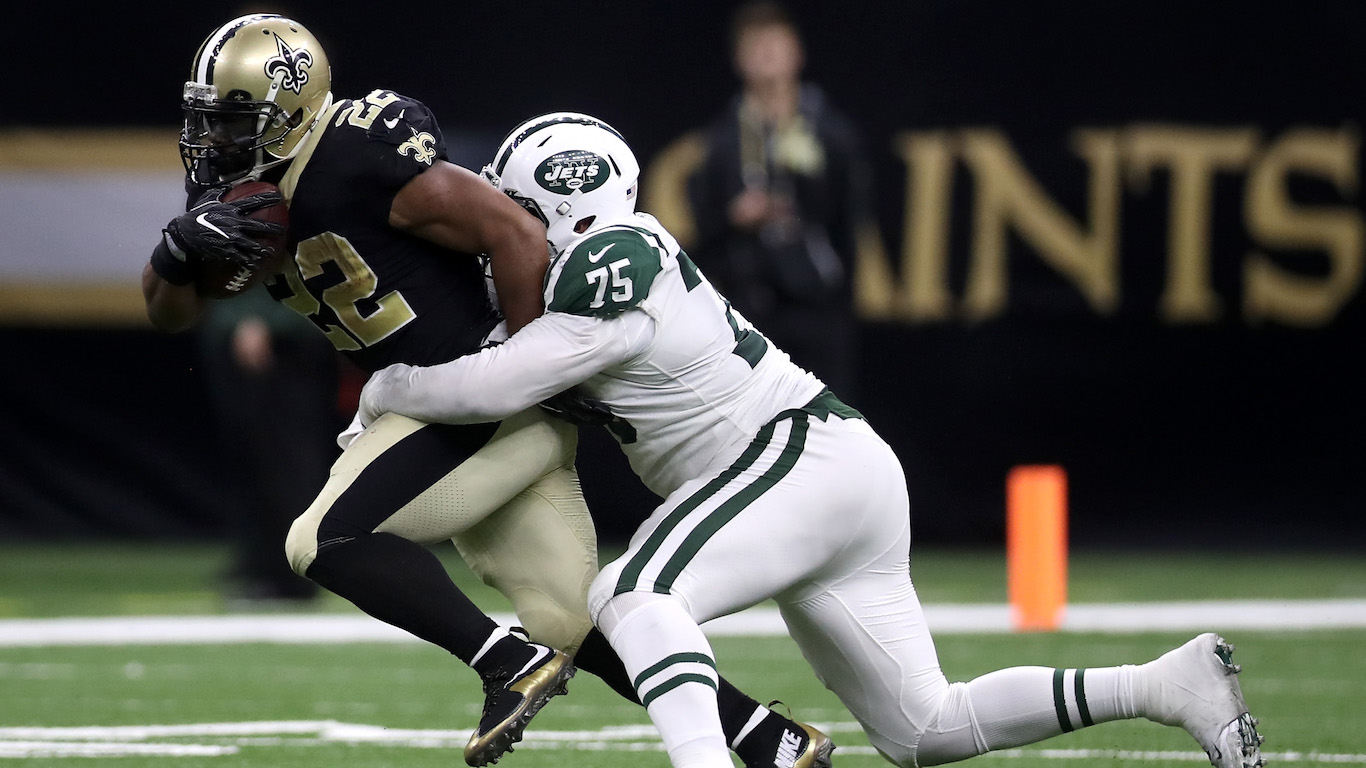 The winner of this matchup clinches a playoff berth, and the loser will still have a good chance at postseason play. The Saints (10-4) have the edge, even though the Falcons (9-5) won their first meeting 20-17 on Dec. 7. The Saints seek a little revenge for that loss, and the fact is they haven’t beaten Atlanta since the final game of the 2015 season in this intense NFC South rivalry. New Orleans is coming off a 31-19 win over the Jets on Sunday. Running back Mark Ingram scored twice and finished with 74 rushing and 77 receiving yards. Drew Brees was Drew Brees, completing 72.2% of his passes with a pair of touchdowns and one interception. It’s no surprise that the Saints have the NFL’s top offense, averaging 401.8 yards per game.

The Falcons, coming off a Monday night 24-21 win over Tampa Bay, will have one less day to prepare. Running back Devonta Freeman had a big game with 22 carries for 126 yards and a touchdown, plus he had a team-high five catches for 68 yards. The Falcons will clinch at least a wild-card berth by beating either the Saints or the Panthers in Week 17. 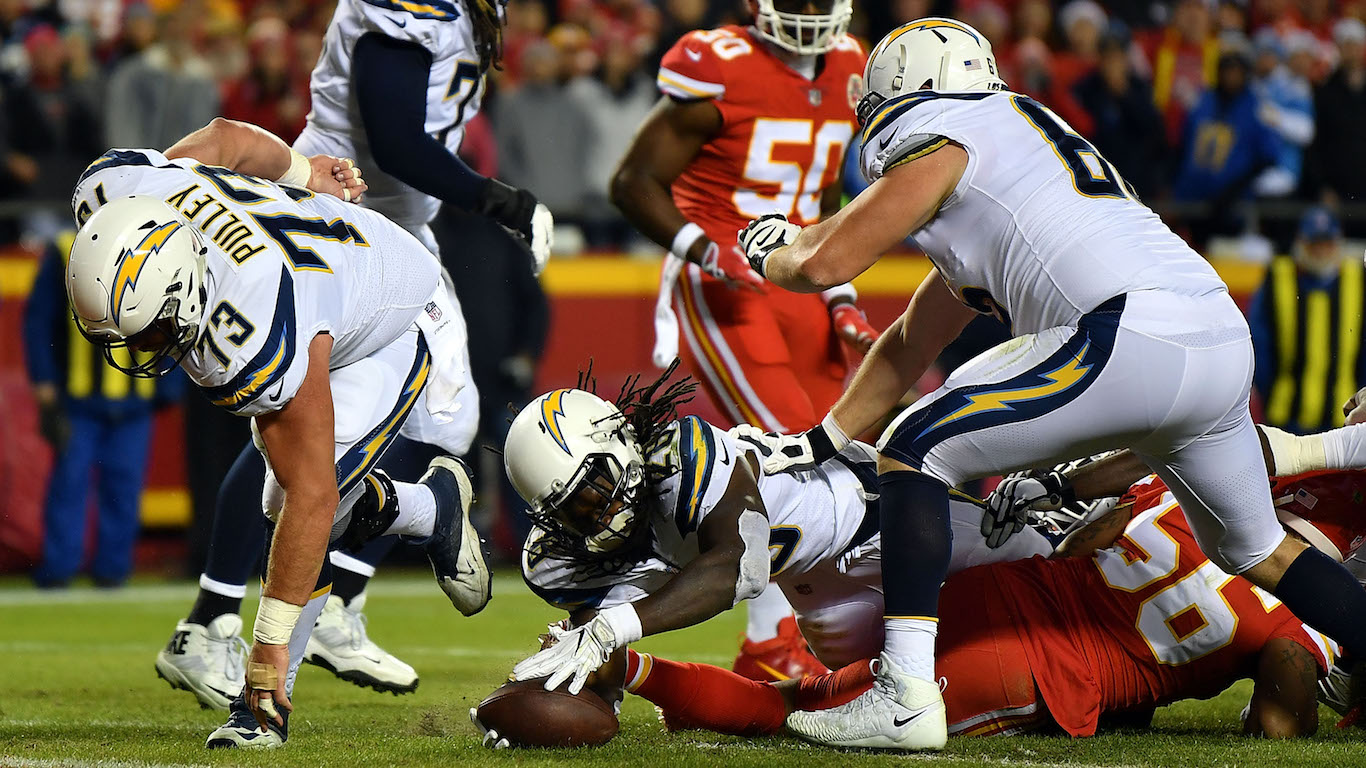 Even after a 30-13 loss to the Chiefs, the Chargers (7-7) have slim chances of earning a wild-card berth. They need some help and can help themselves with a win over the Jets. Running back Melvin Gordon finished with 169 all-purpose yards (78 rushing) and a touchdown against the Chiefs. He fared better than Philip Rivers, who threw three interceptions and one touchdown pass. The playing status for Chargers tight end Hunter Henry for Sunday is up in the air because of a laceration to his kidney.

There is no postseason for the Jets (5-9). Even though this game would give them a reason to get a better look at quarterback Christian Hackenberg, Coach Todd Bowles said he’ll stick with Bryce Petty, who had one touchdown and two interceptions in the 30-13 loss to the Chiefs on Sunday. It’s the third season for Petty, who got the nod after starter Josh McCown broke his hand a few weeks ago. 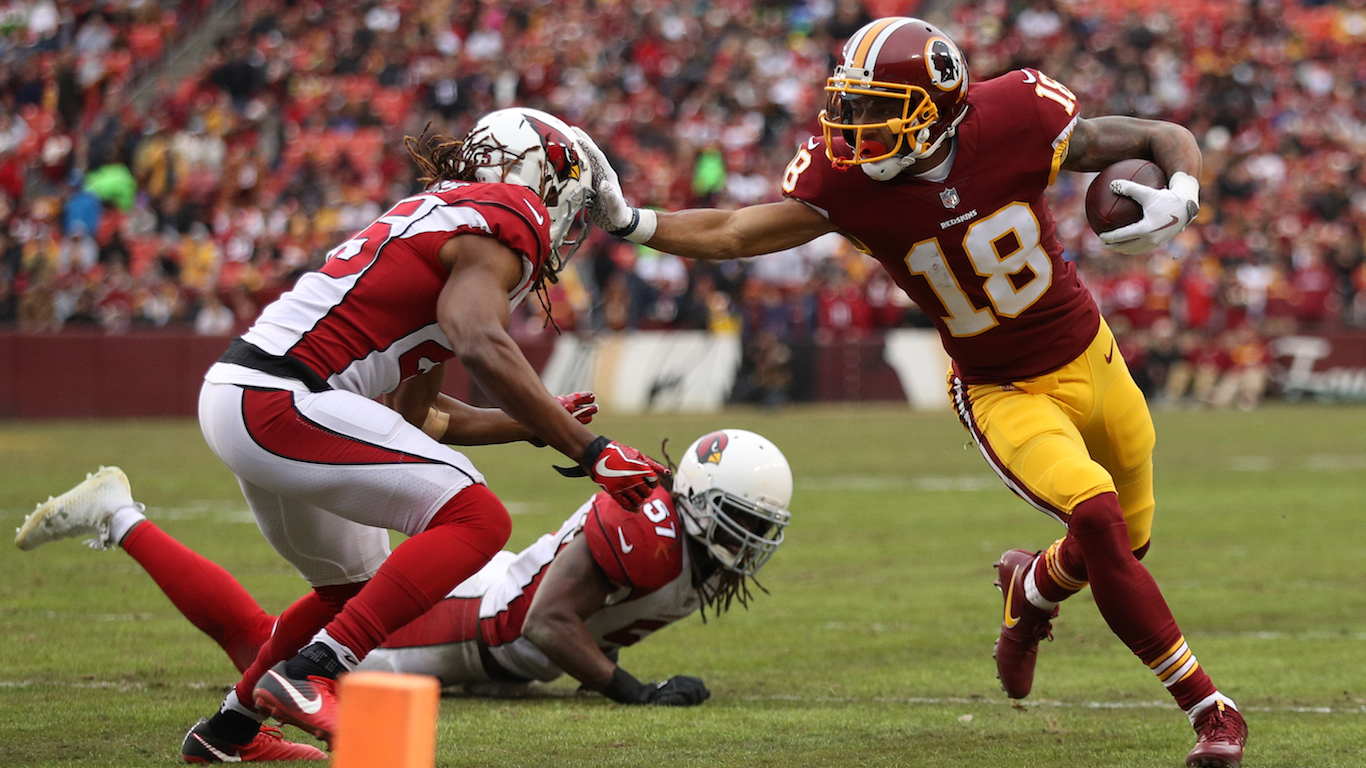 The Redskins, who are without doubts about their quarterback at least for the next two games, get the nod in this game, which is one of three this week with zero playoff implications. The Redskins (6-8) just beat the Cardinals 20-15. Much was expected this season, but they could never turn it around after a 3-4 start. Kirk Cousins, who had two touchdown passes in the 20-15 win over the Cardinals on Sunday, has not been the main issue. It’s been spotty play from the defense, which has turned a season of hope into another one of disappointment and missing the postseason for the second straight year.

The Broncos, who beat the Colts 25-13 last Thursday, do not have a starting quarterback. It’s been an issue since Week 1. With Trevor Siemian out with a shoulder injury, Brock Osweiler could get another start, while Paxton Lynch is expected to see some playing time. Denver could be a good landing spot for Kirk Cousins, who is in his final year of his contract with the Redskins. That possibility could add a little sizzle to what could be a blah game.