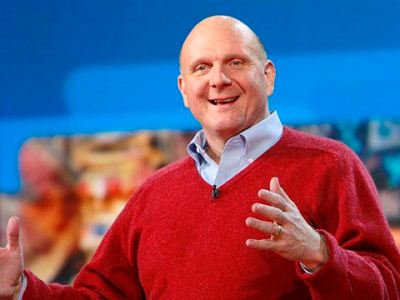 Source: Microsoft Sweden, via Wikimedia Commons
Microsoft Corp. (NASDAQ: MSFT) CEO Steve Ballmer said he would reinvent the company. Most of the world believed, after a decade of failing to make the large software corporate a renewed success, that Ballmer could not do it. But the most recent incarnation of his turnaround efforts has worked. Actually, it has not just worked; its success has been spectacular. As Microsoft’s board looks for a new chief executive officer, perhaps it should ask Ballmer to change his mind and stay.

The argument that Ballmer should exit — whether by his own volition or pressure from the board — has been based on his inability to diversify away from Windows, the ubiquitous but flailing operations system that has run on personal computers for decades. Windows has not followed other major software onto the exploding number of tablets and smartphones. Microsoft’s enemy, Google Inc. (NASDAQ: GOOG), invented the Android operating system, which has become the leading mobile device software. Falling PC sales prompted experts to claim the core Microsoft franchise could not hold earlier sales levels.

After several attempts to recast Windows as an operating system that could run across a number of devices, sales numbers showed the effort had failed. New versions of Windows tested the market again and again. Ballmer did not give up, but he did recently modify his strategy to include the creation and manufacture of hardware. This would include tablets, flagshipped by the Surface, smartphones from its acquisition of Nokia and its standard-bearer Xbox game console.

In addition to consumer software and hardware, Ballmer had to defend the software Microsoft sells to businesses — its server and office tools, among others. In a world in which software hosts on the cloud, Microsoft’s software could not be successful if installed individually on machines.

Microsoft new plan has been an instant success, as its latest earnings show:

“Our Commercial segment continues to outpace the overall market, and our Devices and Consumer segment had a great holiday quarter,” said Steve Ballmer, chief executive officer at Microsoft. “The investments we are making in devices and services that deliver high-value experiences to our customers, and the work we are doing with our partners, are driving strong results and positioning us well for long-term growth.”

Ballmer’s statement does not read like a swan song.

The Xbox has to fend off competition from both Sony Corp. (NYSE: SNE) and Nintendo. The new Sony PlayStation 4 has done relatively well. Nintendo’s Wii U sales have been crushed. However, Microsoft can reasonably claim it is the leading maker of game consoles in the world. And the Xbox finally has the chance to be the Trojan horse that Ballmer wanted it to be. With Xbox features like a content library of premium video and the ability to act as an advanced set-top box, Microsoft has the chance to challenge Amazon.com Inc. (NASDAQ: AMZN) and Netflix Inc. (NASDAQ: NFLX) in the content delivery business, as well as cable and satellite TV firms at the center of the living room.

Ballmer has also posted early but strong success in Microsoft’s efforts to expand its reach into businesses and enterprises:

“We significantly outpaced enterprise IT spend as we continue to take share from our competitors by delivering the devices and services our customers need as they transition to the cloud,” said Kevin Turner, chief operating officer at Microsoft. “Our commercial cloud services revenue grew more than 100% year-over-year, as customers are embracing Office 365, Azure, and Dynamics CRM Online, and making long-term commitments to the Microsoft platform.”

As Microsoft’s revenue reaches the high-water mark in its history, and does so because it has been able to change the way it conducts business, Steve Ballmer has become the best person to take the company forward.