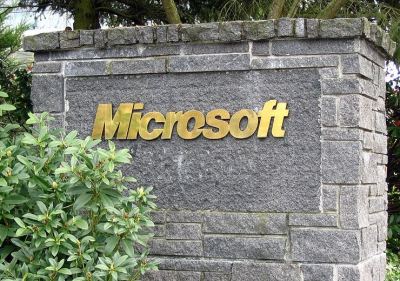 Source: Wikimedia Commons
Microsoft Corp. (NASDAQ: MSFT), once nearly orphaned by investors, has nearly touched its 52-week high. As a matter of fact, make that a 10-year high, for good measure. It has gotten there without a large explosion in new businesses like cloud computing. Much of the rise in revenue and profits has recently come from businesses that are many years old.

Microsoft’s stock reached $46.97 a share last week, against a 52-week high of $47.57. Some of the rise likely derives from the rapid rise in the Nasdaq. Some has to do with Microsoft’s most recent earnings.

Satya Nadella may be the CEO of Microsoft now, but the fingerprints on the company’s most recent quarterly results belong to former CEO Steve Ballmer. So does much of the credit for the rise in Microsoft’s shares. Virtually every business that posted good results, including the most successful divisions, were launched or advanced on Ballmer’s watch.

The largest jump in division sales was at Nokia in the most recently announced quarter, which was not included in last year’s results for the quarter. Nadella became CEO in February, so his imprint as head of the company is barely nine months old. Microsoft bought Nokia in September 2013, well before his appointment. Nokia provided 11% of Microsoft’s total sales last quarter.

Office 365 was launched in June 2011. In the new earnings report, management said:

Xbox was released in 2001, barely a year after Ballmer took the CEO job from Bill Gates. It matured under Ballmer, and the most recent generation, the Xbox One, launched while Ballmer was still CEO. In the quarterly statement, management said:

The creation of Xbox was considered a folly because Sony Corp.’s (NYSE: SNE) PlayStation dominated the market in the late 1990s. As it turned out, over time, Ballmer was right.

The first Surface tablet was launched by Ballmer in July 2012. It was supposed to be another failure because Microsoft could not compete in the crowded tablet market dominated by Apple Inc.’s (NASDAQ: AAPL) iPad and products from Samsung. Management said in the new quarterly statement:

Microsoft management said that Azure was another critical part of its success. The product was first released in 2010. In the quarterly statement:

Enough said. Ballmer was banished from Microsoft for a lack of innovation and the absence of the kind of hardware and software that could have caught the attention of, and sales from, consumer and business users. As it turns out, most of Microsoft’s new successes are based on things that are old.